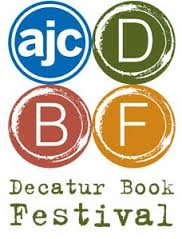 The 2015 AJC DBF will feature a variety of feature lectures, discussions, and signings from more than 600 authors, including award-winners, best-sellers and some just getting started. For this year's Kidnote Address, Judy Schachner, creator of the Skippyjon Jones picture books, will present her newest character and picture book at this year's festival with Dewey Bob. A few more internationally recognized authors to be featured include: Ron Rash, Sara Paretsky, and ReShonda Tate Billingsley.

The AJC Decatur Book Festival is the largest independent book festival in the country and one of the five largest overall. Since its launch, more than 1,000 world-class authors and hundreds of thousands of festival-goers have crowded the historic downtown Decatur square to enjoy book signings, author readings, panel discussions, an interactive children's area, live music, parades, cooking demonstrations, poetry slams, writing workshops, and more.
The festival will feature lectures and signings from more than 300 national and local authors, including award-winning and best-selling authors representing all genres of books.
Dates: Friday, September 4, 2015 - Sunday, September 6, 2015
Times: Fri 5pm, Sat 10am-6pm, Sun noon-6pm
Tickets for the Keynote event are required: Free and limited to two per person

In order by date and time:

MEERA SUBRAMANIAN
http://meerasub.org
Meera Subramanian is an award-winning journalist whose work has been published in the New York Times, Nature, Virginia Quarterly Review, Orion, and elsewhere. She is an editor for Killing the Buddha and earned her graduate degree in journalism from New York University. She lives on Cape Cod in Massachusetts and can be found at www.meerasub.org and @meeratweets.
ENDANGERED LANDS AND LIVELIHOODS
Decatur First United Methodist Chapel
Saturday, 11:15-12:00
BOOK: A River Runs Again
In this lyrical and intimate tapestry of five stories dealing with life, loss, and survival in modern-day India, Meera Subramanian travels in search of the ordinary people and micro-enterprises redeeming India’s natural world. An engineer-turned-farmer brings organic food to Indian plates. Villagers revive a dead river. Well-intentioned cookstove designers persist on a quest for a smokeless fire. Biologists bring vultures back from the brink of extinction. And in Bihar, one of India’s most impoverished states, a bold young woman teaches young adolescents the fundamentals of sexual health and in the process, unleashes their untapped potential. In these true stories, Subramanian discovers renewed hope for a sustainable and prosperous future for India.
https://www.decaturbookfestival.com/presenters/view/557b40ef5b2b260649f4c846

WAQAS KWAJA
Local Poetry Stage presented by Java Monkey
Saturday, 12:00-12:10
Waqas Khwaja is a professor of English at Agnes Scott College, where he teaches Postcolonial Literature, British Romanticism, Victorian poetry and fiction, and Creative Writing. He has published three collections of poetry, the latest being No One Waits for the Train. He was translation editor forModern Poetry of Pakistan (Dalkey 2011), showcasing the work of 44 poets from Pakistan’s seven indigenous languages, and edited a special issue on Pakistan for The Journal of Commonwealth and Postcolonial Studies(Spring 2011).

MONI BASU
TRUTH VS. FACT IN MEMOIR AND NARRATIVE NONFICTION
Old Courthouse presented by Lenz
Saturday, 12:30-1:15
Narrative nonfiction (aka narrative journalism, creative nonfiction) is often defined as telling true stories using the fiction writer’s toolbox for a more artful outcome than a factual account. Subjects become characters, and settings become metaphors. But how far is too far in the service of creativity and truthfulness?
https://about.me/monibasu
Moni Basu is a reporter on CNN Digital’s Enterprise team. She loves to tell extraordinary tales about seemingly ordinary people. She covered the Iraq War from 2002 to 2013 and won several national awards for her coverage. One of her stories was published as an e-book, Champlain Turner’s War.
Moni has a Master’s degree in International Relations from Florida State University and has been a journalist for more than three decades. She was born in India and has straddled two cultures all her life, which explains her interest in issues of race and identity.
When she’s not reporting, Moni loves to travel, especially to places that are not on tourist lists. Number one on her bucket list is to ride the Trans-Siberian Railway, from Vladivostok to St. Petersburg.

REETIKA NIJHAWAN
Emerging Writers Stage
Saturday, 2:00-2:05
Reetika Khanna Nijhawan was born and raised in a small town in northern India. While growing up, she travelled the world extensively with her father, an officer in the merchant navy. After receiving her degree in Psychology from Delhi University, she worked as a flight attendant with Lufthansa before settling down to write for ELLE and ELLE Décor in Mumbai. She later moved to Atlanta, where her work has been published in the Atlanta Journal-Constitution and Khabar magazine. Kismetwali and Other Stories is her first work of fiction. She penned these eight novellas over time, while waiting in the carpool line outside her daughter’s school. www.KahaniPress.com BOOK: Kismetwali and Other Stories

SABAA TAHIR
FARAWAY LANDS
Teen Stage
Sunday, 2:00-2:45
Ancient worlds and far away places provide the settings for tales of rebellion, revenge, and romance by three celebrated debut YA authors.
http://SabaaTahir.com
Sabaa Tahir grew up in California’s Mojave Desert at her family’s eighteen-room motel. There, she spent her time devouring fantasy novels, raiding her brother’s comic book stash, and playing guitar badly. She began writing An Ember in the Ashes while working nights as a newspaper editor. She likes thunderous indie rock, garish socks, and all things nerd. She currently lives in the San Francisco Bay Area with her family.
BOOK: An Ember in the Ashes
Laia is a Scholar living under the brutal rule of the Martial Empire. When her brother is arrested for treason, Laia must step out of the shadows and embark on a quest that will take her from the haunted catacombs of her city to the halls of Blackcliff Academy, where the Empire trains its most feared soldiers. There she will she go undercover as a slave, spying on the Martials in exchange for help from rebels who claim they will save her brother from execution. What she doesn’t realize is that in making this bargain, not only will her own life be at stake, but she will be thrust into the center of a conflict with global consequences.
Elias is Blackcliff’s finest soldier—and, secretly, its most unwilling. Sickened by the prospect of hunting and killing Scholars who oppose the Empire, Elias decides to desert the military. But before he can run, he’s ordered to participate in the Trials, a ruthless contest to choose the next Martial emperor. Elias must wage war in the Trials with skill and ferocity while struggling with a deep inner conflict. For while losing the Trials might cost him his life, winning them could cost him his soul.
When Laia and Elias’s paths cross at Blackcliff, they find that their destinies are more intertwined than either could have imagined—and that their choices will change the fate of the Empire itself.

SONA CHARAIPOTRA
Teen Stage
Sunday, 3:00-3:45
Rachael Allen (The Revenge Playbook) and Sona Charaipotra (Pretty, Tiny Things) share stories of revenge and regret.
http://www.SonaCharaipotra.com
Sona Charaipotra is a journalist who has written for The New York Times, People, Parade, Cosmopolitan, and other major media. With her co-author Dhonielle Clayton, they co-founded CAKE Literary, a boutique book packaging company with a decidedly diverse best. Tiny Pretty Things is her first novel.
BOOK: Tiny Pretty Things
Black Swan meets Pretty Little Liars in this soapy, drama-packed novel featuring diverse characters who will do anything to be the prima at their elite ballet school. Gigi, Bette, and June, three top students at an exclusive Manhattan ballet school, have seen their fair share of drama. Free-spirited new girl Gigi just wants to dance — but the very act might kill her. Privileged New Yorker Bette's desire to escape the shadow of her ballet star sister brings out a dangerous edge in her. And perfectionist June needs to land a lead role this year or her controlling mother will put an end to her dancing dreams forever. When every dancer is both friend and foe, the girls will sacrifice, manipulate, and backstab to be the best of the best.

MOSTAFA JALAL
Local Poetry Stage presented by Java Monkey
Sunday, 4:00-4:55
Mostafa Jalal is a student at Georgia State University getting his PhD in Poetry. He is originally from the west coast and has been published in magazines and online. He writes for the poetry on radio show at GSU,Melodically Challenged. He is also a part of the literary journal, Five Points.

SUE SEHGAL
Sue Sehgal was a university professor and now she enjoys reading to children during story time. She is the founder of a nonprofit that promotes social responsibility among students, and serves on the boards of two universities and a national performing arts center. She loves reading, music, and swimming. She lives with her family in Atlanta.
In conjunction with the festival, Sue will be speaking at a private event for pre-school literacy.
BOOK: A Bucket of Blessings
A beautiful myth from India comes to life in this enchanting picture book -- a New York Times bestseller.
Near a majestic mountain in a vast jungle with many mango trees, it has not rained for weeks and weeks. The village well and pond are dry. Monkey and his friends look everywhere for water, but they have no luck. And then Monkey remembers a story his mama used to tell him, a story about how peacocks can make it rain by dancing. So he sets out to see if the story is true…
This little-known legend, told with dramatic rhythm and illustrated with the colors and textures of India, is sure to delight and inspire.
https://www.decaturbookfestival.com/presenters/view/55a554601ab8c1e305b21954