Public
· Hosted by Krishna Dalia and 2 others
Anand Banka and Reva Banka are hosting this event in Atlanta on 23rd June 2019 at Buford Community Center . It’s a great show to attend and experience perfect blend of BOLLYWOOD with CLASSICAL music.
8Sweet Treats is super excited to organize the show in Atlanta!
Ticket prices are $25,$30,$40 and $50.
Online ticket sales starting soon, but you can contact Anand or Reva to reserve your seats.
For Sponsorship or questions, contact me at 864-477-9049

BUY TICKETS In NYC, The executive director of IAAC, Sunil Hali called this the "breaking boundaries" concert! The band presented many popular Bollywood songs from the 80s and 90s along with old and new classical bandishes (compositions), set in similar ragas simultaneously. The perfect blending of the Bollywood and classical made it a joy to listen to for non classical listeners not familiar with the music. The audience members were dancing in ecstasy during the finale of the evening.

Anurag Harsh, IAAC board member and classical vocalist said,"Bollywood Gharana is a refreshing introduction to what is possible when contemporary music is painstakingly weaved in with traditional classical music. Abhijit Pohankar is a wizard at this and the credit goes to his father the great Hindustani classical vocalist Pandit Ajay Pohankar. Pandit ji used to come to my parents house often and his sargams I recall were the best I had ever heard in the world of classical music. He was also among the few classical maestros that had total command over Thumri and lighter musical forms. Much of Panditji’s finesse has come into Bollywood Gharana through his son Abhijit and this band has shown how to do “fusion” the right way. The impact Bollywood Gharana had on our audience was mesmerizing. This was a memorable concert that rocked NYC and we look forward to presenting more such concerts in the future".

Bollywood Gharana is a unique fusion of two Genres of Indian music.The very popular Bollywood music and the ancient Indian classical music.This is the first of its kind of music conceived by India’s most revered artist of Fusion music, Abhijit Pohankar. The band consists of some of the popular names of the Bollywood music industry like Bhavya Pandit who is in the jury of Sa re Ga ma. The drummer Keyur has played his percussion in many movies like "Thugs of Hindusthan",  "Kalank", "Return of Singham" etc. Bollywood Gharana would be a unique experience.

Bollywood Gharana was created by Abhijit Pohankar, the son of classical vocalist Pandit Ajay Pohankar. Abhijit , the master craftsman of fusion music, has once again created the perfect blend of classical music with popular Bollywood music. Bhavya Pandit, the lead vocalist of the band is a well known playback singer. Bhavya's singing truly stole everyone's heart with her mellifluous singing, wit and charm. She spread cheer with her effervescent attitude on stage. Gandhar Deshpande was the classical vocalist of the band. One can tell he has had rigorous training because the compositions he performed were authentic but he also made them sound very cool. Keyur Barve on drums, Rahul Deo on Bass & Sourabh Joshi on Guitar add more magic to the evening. Artists: Abhijit Pohankar-Keyboard/Vocals
Bhavya Pandit-Bollywood Vocals
Gandhar Deshpande-Classical vocals
Rahul Deo-Bass guitar (Asha Bhosles bassist)
Sourabh Joshi-Acoustic Guitar & Vocals(Plays in all  Vishal Bharadwaj films)
Keyur Barve - Drums​ 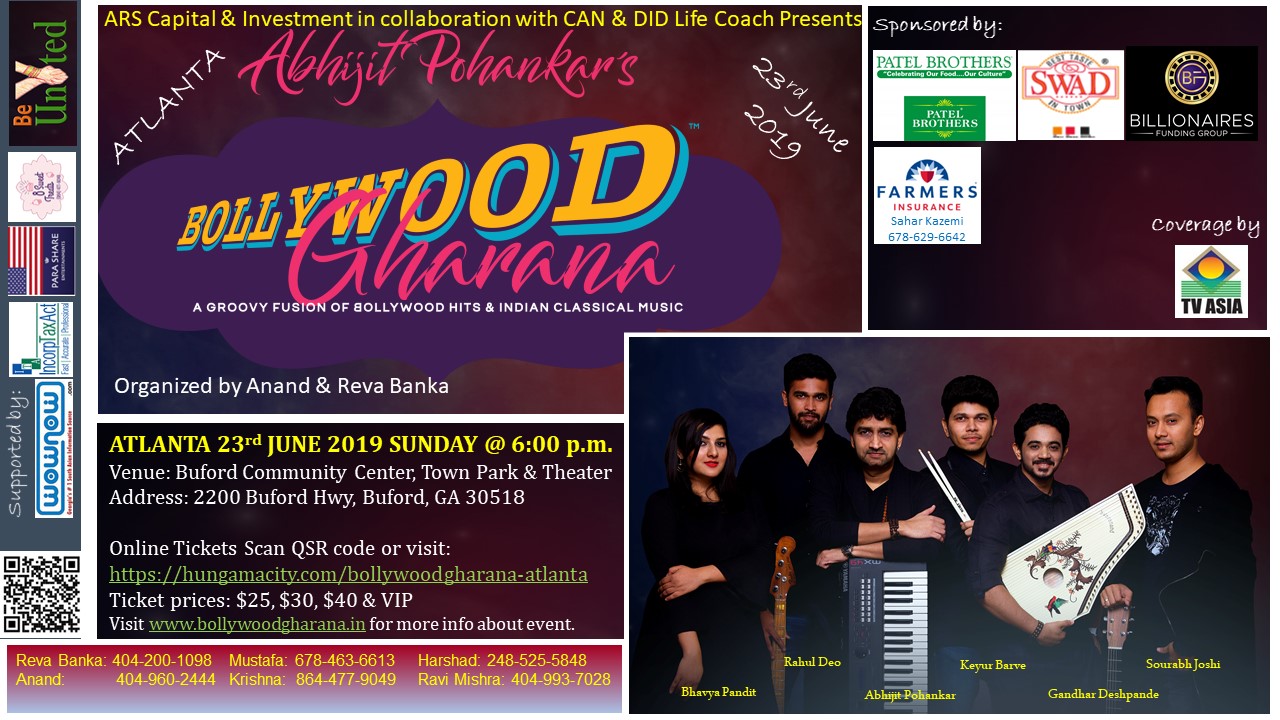