Consulate General of India with the support of about 50 yoga related organizations in Georgia will be holding the 2nd International Day.

On December 11, 2014, the United Nations General Assembly unanimously adopted a resolution introduced by India, and co-sponsored by 177 out of the 193 Member States of the UN, to celebrate 21stJune as the ‘International Day of Yoga’. The resolution had the highest number of co-sponsors ever for any UN General Assembly resolution of this nature, reflecting the universal appeal of Yoga.

The 2nd International Day of Yoga is being celebrated in Georgia by the Consulate General of India with the support of around 50 Indian associations/Yoga institutions and the City of Sandy Springs, onSunday, June 26, 2016 (as June 21 is a working day) at Hammond Park, Sandy Springs, GA-30328. A copy of flyer giving the details of International Day of Yoga is attached herewith.

The Consulate General of India will also be celebrating the International Day of Yoga in the other seven states/territories in Southeast United States, under the jurisdiction of the Consulate, with the support and active cooperation of local Indian associations/Yoga institutions during the period June 18-26, 2016. 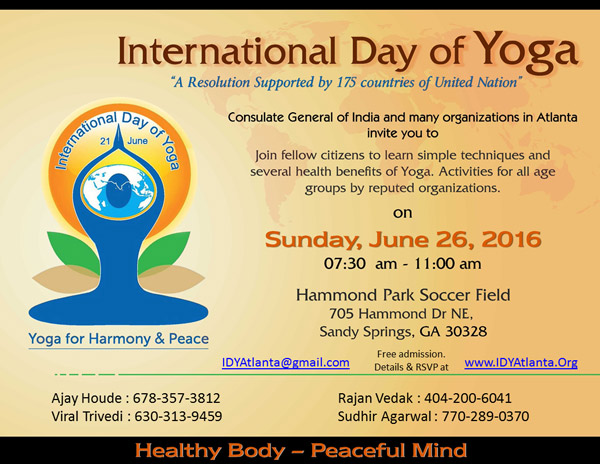