Times:
10:30am-11am: silent meditation in the Chapel before each Sunday’s talk.
11am-noon: talk and worship in the chapel.
noon-1:30pm: devotees and friends meet in the Monastery for tea, coffee, snacks and a continuation of our spiritual fellowship.
Please join us!
PS: Please be on time. The service starts promptly at 11AM.

July is a month for study of Raja Yoga, a spiritual path often called the yoga of meditation. As a raja yogi, you use ancient, proven spiritual techniques to quiet your mind and gain control of your attention. Regular daily practice of Raja Yoga increases your ability to concentrate, and may lead to meditation. This can unite you with the Divine Presence, the source of your being, and liberate you from the cycle of rebirth and death.

July 2nd @ 11am
“That too is My Work”
w/ Br. Shankara
Swami Premananda was a direct disciple of Sri Ramakrishna. The Swami was deeply devoted to the Master — he recognized him as an incarnation of Vishnu. Once, years after the Master’s death, Premanandaji visited the city of Puri. There, he encountered a Christian missionary preaching his message from the steps of the Temple of Jagannath. (The image in that temple is revered as a form of Vishnu — Jagannath means Lord of the Universe.)

A large crowd had gathered, listening attentively to the evangelist’s fervent plea. He exhorted them to abandon their worship of lifeless idols and become followers of “the living Christ.”

Swami Premananda was deeply offended; in his view the minister was insulting both the Lord and India’s spiritual heritage. So, the Swami began to loudly chant a traditional salutation to Jagannath; the crowd soon picked it up and drowned out the missionary, who fled.

That night, Premanandaji had a dream of Sri Ramakrishna. The Master scolded him severely, saying the Swami’s reaction to the missionary had been misguided. “That too is my work!” the Master insisted “Tomorrow morning, you find that man and apologize to him!”

This Sunday we will explore and discuss what Sri Ramakrishna meant, and relate what he said to Sri Krishna’s statement in Chapter 4 of Bhagavad Gita: “Whatever path men travel is my path; no matter where they walk it leads to me.”

Wednesday, July 4th - 12noon to 3pm
There will be a short talk on Swamiji (Swami Vivekananda) in the Chapel by Br. Shankara, and songs and readings by the congregation, followed by a potluck lunch on the sunporch and outdoors, or in the Fellowship Hall, depending on the weather. Fireworks? Yes, children, there will be fireworks!! Please join us.

July 8, 10am-2pm (2nd Saturday of each month) - SEVA SATURDAY - Lunch provided. Come as stay as long as suits your schedule. 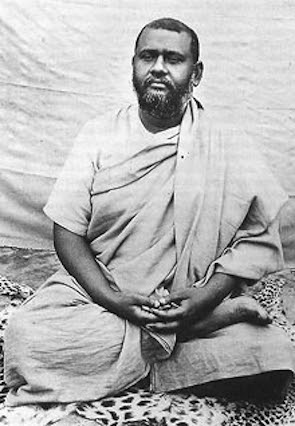 w/ Br. Shankara
Swami Brahmananda, the spiritual son of Sri Ramakrishna and Sri Sarada Devi, said:
“I will tell you a secret. You may not fully understand its meaning now, but in time its truth will dawn on you. And this truth is that every man’s will and mind lead him progressively toward good. Some are led along thorny paths and some are led along smooth paths, but all reach the same goal.” The goal is Self-realization — freedom, liberation from all bondage! Brahmanandaji also taught that you can accelerate the process by your own efforts, by your spiritual practice.

Swami Shivananda, another of Ramakrishna’s direct disciples, said: “All that one has to do is establish God in one’s heart by any means. Then, one need make no separate effort to build up a moral character. All such divine qualities as truthfulness, kindness, love, etc., then come to one as a matter of course.”

On Sunday morning, Br. Shankara will point to evidence of spiritual progress in your life, and explore how the principles and practices of Raja Yoga can help establish God in your heart.

July 25 - August 1 - Swami Sarvadevananda will visit with us!

July 25, 8-9pm (Tuesday) - Swami Sarvadevananda will lead our Gospel of Sri Ramakrishna class in the Chapel

July 26, 8-9pm (Wednesday) - Swami Sarvadevananda will lead our Wednesday night class on (text TBD at 7/19th class) in the Chapel

July 27, at 8:00pm (Thursday), - Swami Baneshananda, Head of the Vedanta Center of Germany, will speak on “Chapter 6 of Bhagavad Gita” in our Center’s Chapel.

Swami BaneshanandaSwami Baneshanandaji has been a monastic member of the Ramakrishna Order for over 30 years. He had the good fortune to serve Revered Swami Bhuteshananda, former President of the Order, for more than a decade.

The swami is known as a skilled speaker and a fine scholar. From January 2001 to March 2004, he served as editor of “The Vedanta Kesari,” one of the Ramakrishna Order’s major English periodicals.

In 2004, Swami Baneshananda was posted as the Minister-in-charge of the Vedanta Center in Germany. The Center has grown under his leadership, with Ashrams in Berlin and Mühlheim am Main, and a Retreat House in Steinebach/Sieg.

All are welcome! Come and enjoy this opportunity to hear a senior swami of the Ramakrishna Order offer his thoughts on the Bhagavad Gita.

July 28, 7:30-9:00pm (Friday) - Potluck Supper and Reception for Swami Sarvadevananda, followed by informal conversation with the Swami in the Library.

July 30, 11am-12pm (Sunday) - Talk: “The Purpose and Practice of Meditation,” with Swami Sarvadevananda-ji, immediately followed by a Potluck Lunch in the Monastery. All are welcome.

July 31, 8-9pm (Monday) - Swami Sarvadevananda will lead our Upanishads class on in the Chapel