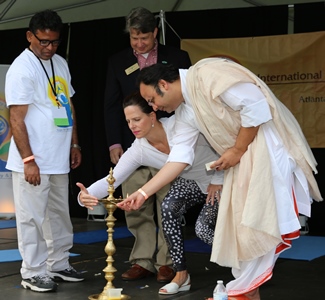 The Consulate General of India in Atlanta in collaboration with the City of Sandy Springs and 30-plus organizations celebrated the second International Day of Yoga (IDY) on June 26, 2016 at the Hammond Park soccer field in Sandy Springs from 7:30am to 11am. More than a dozen spiritual and yogic organizations actively participated in the celebration.

Consul D. V. Singh (Head Of Chancery), Consul General Mrs. Louise Blais of the Canadian Consulate in Atlanta, and Councilman Mr. Gabriel Sterling from the City of Sandy Springs participated in the inaugural ceremony and other related events. The event was inaugurated by lighting of the lamp by the dignitaries in a traditional Indian manner. Shree Dwarkeshlalji Maharajshree, who had been visiting Gokuldham Haveli, also graced this occasion.

Mr. D. V. Singh extended warm welcome and greetings on the occasion of the Second International Yoga Day. He mentioned the adoption of a Resolution by the United Nations last year declaring June 21 as the “International Day of Yoga,” in recognition of a new “Yoga Era” since over 300 million people practice Yoga worldwide, including around 100 million in India and 30 million in the United States. He urged the participants to join hands to spread the message of peace, harmony, and understanding among communities.

The logo of IDY shows the folding of both hands, symbolizing Yoga, or union, which reflects the union of individual consciousness with that of universal consciousness, a perfect harmony between mind and body, man and nature, and a holistic approach to health and well being. The brown leaves symbolize the Earth element, the green leaves represent Nature, blue Water, brightness Fire, and the Sun the source of energy and inspiration. 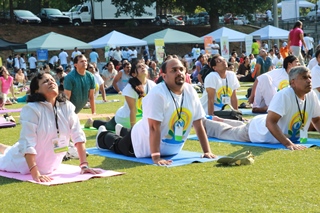 More than 100 volunteers put enormous efforts to make this program a grand success. The event was attended by around 1,000 people who enjoyed doing yoga on a nice, warm summer morning. 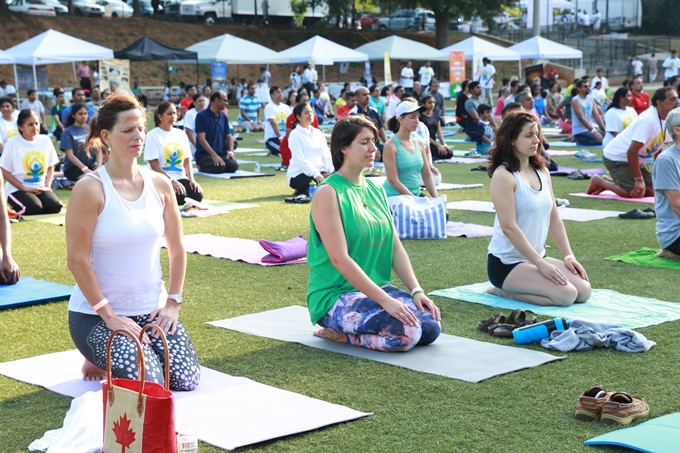