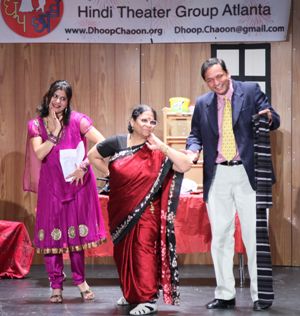 The comedy Ande Ke Chilke, written by late Shri Mohan Rakesh, revolved around petty problems of family life. As the youngest daughter in law (Renu Thapliyal) of the house tries to make egg halwa; knowing that egg is not permitted in the house, the elder daughter-in-law (Shiva Upadhyay) and others (Sanjay Saggare, Aashish Sharma) try to hide this from the mother-in-law (Bharti ben Pandya) and the big brother (Sanjay Tiwari). The hilarious play exposed the audience to the flavor of joint families back home in India and Pakistan.

Another comedy, Parda Uthne se Pehle, originally written by Rajendra Kumar Sharma, was a play about a play—in crisis. When the heroine does not turn up for rehearsal, can the director's wife be persuaded to take the part? And what happens when the original heroine does turn up?! Producer Director, Anil (Anuj Jain) is in trouble, as the heroine of his play, Adhoora Natak, (Hema Jain as Tina) doesn’t show up for the rehearsal, and the play is to open in just two days. He tries to persuade his wife Sheela (Shaveta Jain), a typical homemaker, to take up the challenge and do Tina’s part. But the comical characters, Anil’s assistant Suryakant (Lakshmi Kant Pandya), town goon Salim (Shree Vora), press reporter Verma (Paresh Jain), their son Munnu (Eshaan Jain), and neighbours Laksmi (Vandana Tantia) and Amarjeet (Veena Katdare) keep disturbing Anil, while he is persuading his wife. After lot of begging and pleading Sheila agrees, but the climax begins when heroine Tina shows up in the end. Poor Anil, he ends up pulling his hair, as he never gets to complete his Adhoora Natak.

The show was interspersed with energetic dance items chosen by Mrs. Bhagat and choreographed by Dance Director Rahim Hussain. “Shree Ganesha Deva” set the stage on fire and hall was filled with "once more" shouts. Rahim’s energy was unbeatable and was complimented by Tarana Malik and Vedita Gaur.