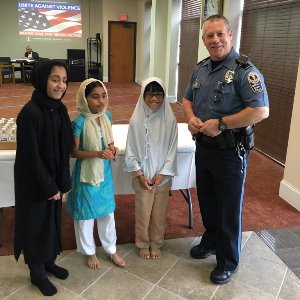 In response to the tragedies in San Bernardino, California; Paris; and elsewhere, the Ahmadiyya Muslim Community’s Georgia Chapter held an interfaith prayer vigil at the Baitul Ata Mosque in Norcross on Saturday, December 12, 2015. The victims of the shootings were held in prayer by Muslim, Jewish, Bahai, and Christian participants. 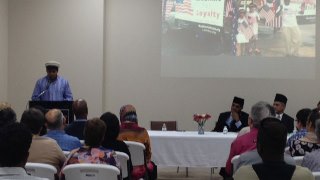 Hazeem Pudhiapura, president of the Chapter, declared that he wished the terror had never happened. The Ahmadiyya community is dedicated to peace with its motto “Love for All, Hatred For None,” and it condemns terrorist attacks and killings. Pudhiapura also promised that should any signs of radicalization or extremism be seen, they would be reported. A high school student, Sultan Humayun, described the work of their youth groups in educating Muslim youth about ISIS’s wrong ideology and that “we all need to oppose them.” Others emphasized that they are Muslims but also proud Americans. Imam Irshaad Mahli explained that the Ahmadiyya Muslim Community holds “no room for violence.” Their next campaign will be to bring other Muslim groups together to speak about values, including nonviolence, and to confront negative ideology. In fact, twenty-one Islamic groups have made a statement in the Atlanta Journal Constitution against terrorism. 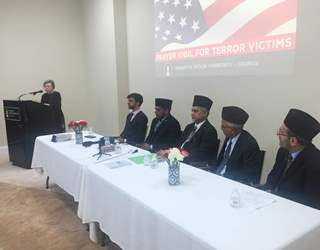 Many guests from other faiths spoke to offer support and stand united.

Audrey Galex, Content Manager at AIB TV, told a Jewish story of the difference between heaven and hell: in hell, people with attitudes of self-centeredness suffer, whereas in heaven, people who help each other flourish.

Former Lilburn Mayor Diana Preston said, “In our community when one person’s suffering, we’re all suffering and to that end we need to support each other.”

A Q&A period drew questions and comments. A descendant of Holocaust survivors stated that “This is how genocide begins—you can’t single out a community because of a few. This is what ISIS wants: prejudice and hatred. The path to peace is we need to embrace one another.” The Ahmadiyya community was thanked for engaging with the mainstream and inviting people to come and understand better. Finally, guests were asked to consider the central, but too-often-ignored message of Islam that is the protection of freedom of conscience, declaring, “There should be no compulsion in matters of faith” (Qur’an 2:257), an exhortation diametrically opposite to any act of terror.

Websites were recommended for further reading: IslamForWest.com, and Alislam.org. Gifts of books were presented to guests: Islam and Human Rights by Muhammad Zafrullah Khan. and Mirza Masroor Ahmad’s World Crisis and the Pathway to Peace.

Link:
"Norcross mosque holds prayer vigil"
Posted: Dec 12, 2015, Updated: Dec 13, 2015
By Meghan Packer
Saleem Ahmad Hayat told CBS46, “We are consistent with our message of love for all and hatred for none.” “We are Muslims but we are proud Americans,” he added. “We are hungry for love and we are telling everyone, come talk to us,” he said with tears in his eyes. “I want to assure my American family that we are one of you.”
http://www.cbs46.com/story/30733523/norcross-mosque-holds-prayer-vigil