COVID-19  In-depth info for Indians in Atlanta/Georgia. Click here
Home > Magazine > Around Town > AIM for Seva raises $23K in less than a minute at the “Ganga” show!

AIM for Seva raises $23K in less than a minute at the “Ganga” show! 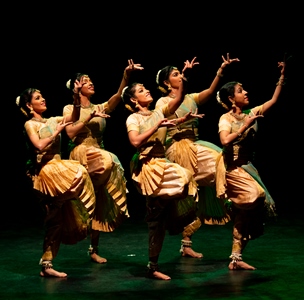 If the cause is right and the ask is proper, Atlanta’s affluent and humane South-Indian community is known to rise to every occasion, as proven on September 15, 2018 by regional chapter-leader of the All India Movement (AIM) for Seva, Eashwar Money. “Our primary goal in Georgia is to raise funds for 115 children in 4 Free Student Homes (FSH), with the cost for each child at $450/year [for tuition, food, boarding, and value-based education], and this amounts to $51,750. We have raised about $40,000 thus far and with pledges to be fulfilled before the end of the year, I am confident we will raise all the required money. At the extremely stimulating Bharatnatyam dance ballet, “Jagat Pavani Ganga,” I challenged the audience to raise money for one floor (of the 3 story FSH-building that is going to be built) that will be dedicated from Atlanta. The cost for this one floor is $60k and at the recital we already raised $23k in less than a minute!” said Money.

Swami Dayananda Saraswathi, Founder of AIM for Seva, defines the organization’s vision: (i) to transform society through a network of seva, of caring; (ii) to bridge the urban-rural divide; and (iii) to empower every person to contribute to the progress of the nation. Each FSH is built close to a government-run school, and the kids stay at the FSH during the school year, going home for summer holidays. The dropout rate, which is very high in rural India, is reduced by 90%, according to the organization. Kids in FSHs get free tuition assistance, food, and shelter so that they can focus on studying—with the result that 90% of students have passed the 12th grade public exams.

AIM for Seva has over 100 FSH's in 16 states in India. It also has 10 educational institutions, 9 healthcare centers, and 10 special project centers like the three Krupa Homes for disabled adults. The Krupa home in the Kanchipuram district in Tamil Nadu was shown in a video at the “Ganga” concert. Currently the organization serves 3,424 boys and girls, and since inception has served over 14,000 students in all.

“Jagat Pavani Ganga,” the exquisite Bharatanatyam dance ballet, was a Kala Sadhanalaya production, performed at Kennesaw State University Dance Theater in Marietta; script and direction was by renowned choreographer and instructor Smt. Revathi Ramachandran, music composed by the venerable Lalgudi Sri G.J.R. Krishnan, and sound production and design by Sri Sai Shravanam. The team of 6 female dancers and 5 males, with one narrator or sutradhar, mostly from the famous dance academy of Kalakshetra, was led by dance director Revathi’s daughter, Manasvini Korukkai Ramachandran, one of the performers herself.

The dance ballet depicted the story of the life-engendering Ganga, from its origin of frivolously flowing through the continents and later being harnessed by Lord Shiva in his matted hair locks, to be released in a steady stream since, over thousands of years. Ganga has enriched the lives of uncountable humans, besides the flora and fauna living on its banks. Over time, however, through mankind’s selfish endeavors, Ganga has been wrecked with industrial construction all around its banks, its pure waters used for sports and recreation, and its flow used to disseminate waste and ashes of the dead. Although Prime Minister Modi has now implemented protection policies and steep fines for miscreants, it remains for the citizens to be aware of its rich ancestry and keep the holy Ganga pure.

Before the actual dance ballet performance, volunteer Smt. Nithya Narasimhan spoke about the organization and its mission, followed by young Anusha Goda, who sang an invocation composed by Swami Dayananda Saraswathi. The dance ballet and its performers were introduced by Atlanta Bharatanatyam instructor Smt. Chandrika Chandran of Natyanjali Academy of Dance.

Dancers depicted the serpent in the forests, the deer, sages in meditation, Lord Shiva himself, and the flowing Ganga. Movements were so fluid that one could imagine the water flowing on stage. Performers were dressed, not in traditional heavy Bharatanatyam attires, but in plaid cream and white handloom cotton; jewelry consisted of chokers for the women made of terracotta and for men the rudraksha garlands. Lights were constantly switched to show changes in moods, depending on the characters being depicted. Towards the end, the industrial destruction along the Ganges’ banks was shown via light and shadow, by performers’ bodies and hand gestures silhouetted on the screen backdrop. The original music score kept every guest engaged until the very end. The show culminated with a standing ovation and continued applause. 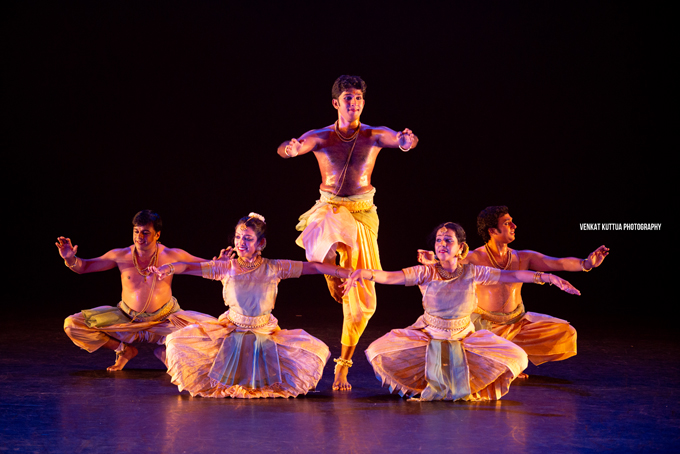