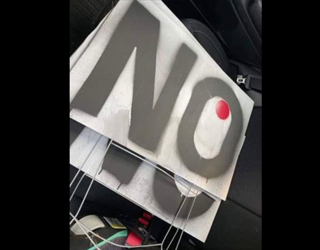 Around September 12th, Kelly Mill Road and Bethelview Road in Forsyth County saw anti-Hindu signs appear on these roads. These signs read ‘NO’ to a red dot or bindi which is representative of the Hindu faith. The signs were taken off with the help of the police and community members.

For the Hindu community, such signs are reminiscent of the Dotbusters gang that targeted Hindus in New Jersey/New York in the 1970s and 80s. Hindus had been pejoratively referred to as ‘Dotheads’ for wearing bindis on their forehead.

The signs seen in Forsyth County were near the proposed location of Sri Bhadradri Rama Temple of USA. The 6.85 acres property on Kelly Mill Road had been approved for a place of worship in 2010. However, local residents have objected to the proposal citing concerns such as traffic, noise, possible large gatherings, loss in property values, etc.

Indian Friends of Atlanta said, “Our community has made Forsyth our home for several reasons including freedom and safety. We have thrived and been successful in Forsyth and have been part of the growth of the county.” The organization has invited community members to reach out to them in case of any harassment, at (470) 253 4IFA or info@ifaworld.org.

They See Blue Georgia has also “condemned this act of bigotry” calling for “action and accountability to protect our communities, not performative gestures.”

“We Hindu Americans cannot take this lightly. We are fearful for our lives, that of our children playing in playgrounds, swimming pools, basketball courts and other public places,” said Shobha Swamy, Atlanta resident and General Secretary of Coalition of Hindus of North America (CoHNA). “Any attempt to draw boundaries on Hinduism and what it represents is dangerous and encroaches on our civil rights,” she added.

The Forsyth State Delegation, which included Wes Cantrell, Todd Jones, Senator Greg Dolezal, Sheri Gilligan, Lauren W. “Bubba” McDonald, Jr. and Will Wade, released a statement denouncing these signs and expressing their support for the community. “Freedom of religion is a founding principle that defines our country,” the statement said. This past weekend though, we witnessed acts against our Hindu community. This is patently unacceptable. Our community thrives when each of the quarter of million residents is free to worship with no threat or fear of retribution.”

State Representative Sharon Cooper in her statement said, “People of different faiths and cultures add to the richness and fabric of our country and religious persecution must not be tolerated in our communities. Those of the Hindu faith are currently under attack and we must speak out loudly against such hatred and stand side by side to fight bigotry and hatred of all kinds, including differences of religious beliefs.”

Rich McCormick, who ran for Congress last year, said, “The Hindu community has been nothing but peaceful. They raise their children to be exceptional academically, exceptional as human beings. They have been excelling in business and paying more than their fair share in taxes. They are the people that have lived the American Dream. It is time to stand up against this bigotry, to stand up for each other. It is time to accept each other for who we are. And this community deserves that absolute respect.”