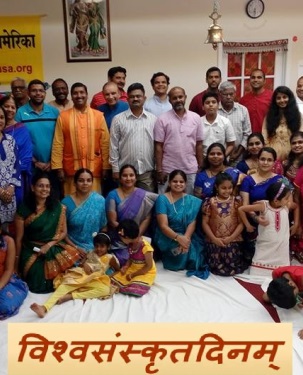 Shri Yashwant Belsare from Sewa International addressed the audience, saying that Sewa and Sanskrit go hand in hand. Shri Bhoga Rao Pappu, Atlanta Chapter Coordinator, said in his speech in Sanskrit that the language is one link that unites all Indians with common heritage. It is a key to our ancient texts and religious-cultural traditions. It is a treasure of abundant knowledge of all fields of interest to all age groups.

World Sanskrit Day was first observed in the year 1969 and is now is celebrated annually around the world to spread awareness about the mother of all Indian languages. It is observed on Shraavana Purnima day, full moon day in the month of Shraavana (August/September) in the Hindu calendar. On this Sanskrit Day, Prime Minister Modi extended greetings to the scholars and students of Sanskrit, which he called a beautiful language.

We cannot ignore the contributions of foreigners in introducing the wealth of information contained in Sanskrit literature into the world. Sir William Jones arrived in India in September 1783 as a judge of the British Supreme Court of Judicature in Calcutta. He was an English philologist, scholar in Sanskrit, and founder of Asian Society. He translated Abhijnana Shakuntala and Ritu Samhara (dramas written by Sanskrit poet Kalidasa) and Gita Govinda (written by poet Jayadeva) into English. He also translated Manu Smriti (laws of Manu) into English. Another scholar, Sir Charles Wilkins, translated the Bhagavad-Gita into English in 1785. Max Müller, a German philologist and Orientalist, translated Hitopadesha, a collection of Indian fables into German. He translated his name into Sanskrit as Moksha (liberation) Müller Bhat (surname). It was to express his veneration for Sanskrit and did not mean to change his real name or religion. He translated Meghaduta (Kalidasa’s drama) into German under the title of The Fatal Ring. The Sacred Books of the East is a monumental 50-volume set of Asian religious writings, translated by various oriental scholars, edited by Max Müller and published by the Oxford University Press between 1879 and 1884. Sanskrit not only deals with the Veda and Upanishads but also concepts such as planetary afflictions, medicine (Ayurveda), surgery, and vimana (flying objects). Maharshi Bhardwaj wrote Yantra Sarvaswa (All about Machines) and Vaimaanika shastra, an early 20th-century Sanskrit text on aerospace technology. Sushruta wrote Sushruta Samhita which discusses surgical techniques such as incisions, probing, extraction of foreign bodies, etc. Sage Garga in his text Garga Hora has described astrology.

Samskrita Bharati USA is a nonprofit organization in 32 states dedicated to bringing Samskritam back to daily life. By organizing courses, camps, and other activities, it is creating Samskritam-speaking communities across the USA. A ladder of learning is offered, from sambhaashana (conversation) to shastras. Thousands of people in the U.S. can now converse fluently in Samskritam, and hundreds of thousands of people in India and several other countries. Samskrita Bharati has two full time workers leading the work in the USA, with hundreds of volunteers in over 40 centers in 25 different states.

The organization offers beginners spoken Samskritam workshops for a weekend or two weekends or 10 consecutive classes of 2 hours each day. It offers a distance learning program, SAFL (Samskritam as a Foreign Language), for high school students. Those who are interested in learning can visit http://www.sbusa.org, write to Atlanta@sbusa.org or info@sbusa.org 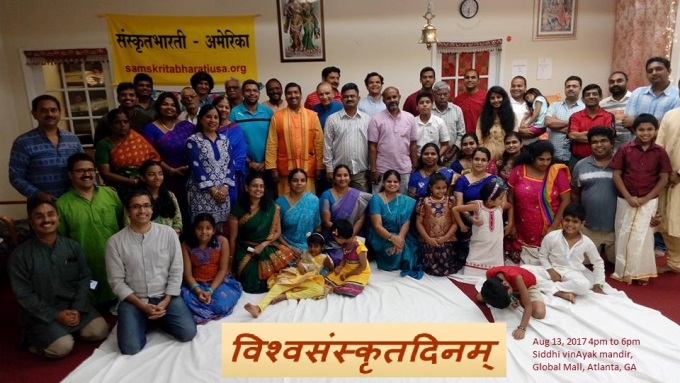