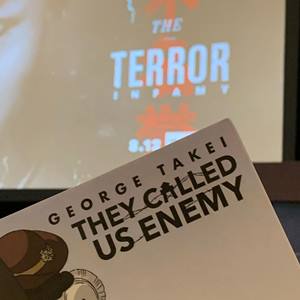 (Left) George Takei's graphic memoir They Called Us Enemy, seen at an advance screening of his film The Terror: Infamy. (Photo: Nandita Godbole)

From July 31 to August 3, 2019, Atlanta hosted the annual, national level convention of the Asian American Journalists Association (AAJA). The Atlanta chapter and its many members provided local hosting support.

AAJA’s website identifies the purpose of this organization thus: “Asian American Journalists Association is a membership nonprofit advancing diversity in newsrooms, and ensuring fair and accurate coverage of communities of color.” Held over four full days at the Loews Hotel in midtown Atlanta, this convention attracted journalists of Asian origin from all across the United States, including a few who represented news organizations based in Asian countries.

This years’ theme for AAJA was “Unite & Represent,” and was presented by CNN since the media giant is based in Atlanta. The theme explored various ways in which the media and journalists within them could rally for better representation in the stories that make the news.

Speakers at the sessions included local and national representatives from all forms of media involved in storytelling and news reporting, from WordPress for bloggers and early career journalists, representatives in the digital media world such as BuzzFeed, Salon, VOX, Facebook, Instagram, and others, as well as those in the traditional print and visual media such as CBS, National Geographic, Fox, and others. Representatives from public media platforms such as GPB (Georgia Public Broadcasting) and NPR (National Public Radio) also participated.

The convention included many learning and networking opportunities for journalists at all stages in their career. Attendees could apply to attend invitation-only interactive workshops with VOX, NBC, CNBC, Fox, BuzzFeed, and PDX, all designed to help current journalists expand their skills and engage with other talent and producers in their chosen fields. Some offered camera tests and interviews with their executive teams. The AAJA’s Executive Leadership and Mentoring program was designed for journalists with at least 5 years of experience.

CNN hosted a Story Slam at their CNN Experience, wherein six journalists competed live for their storytelling skills, and winners earned recognition in addition to cash prizes. The CNN Experience allowed attendees to explore the CNN lounge, CNN augmented reality, CNN Aerial Imagery and Reporting (reporting using drones), and many other aspects of CNN’s large arsenal of news reporting. JCamp was geared towards high school journalism students who had trained for a week at GPB. ‘Voices’ showcased the work of many younger journalists who are making an impact on news gathering and storytelling. The career fair offered opportunities to all levels of journalists to meet with representatives from local and national media, share their skills, and explore opportunities for growth. On August 3, the convention opened its participation to one-day attendees at a reduced rate, and this encouraged many Atlantans interested in learning reporting skills—such as podcasting, and building a brand—to participate.

Gurinder Chadha (left) was at the AAJA convention for a discussion after an advance screening of her film Blinded by the Light. (Photo: Nandita Godbole)

This power-packed event had many highlights within the sessions each day and organizers included several unique and unforgettable moments. For instance, attendees were invited to an advance screening of Gurinder Chadha’s film, Blinded by the Light, and a keynote a few days later that allowed attendees to hear her speak of her challenges as a movie maker of Asian origin, and an impromptu press conference in the lobby.

George Takei (second from left) spoke on a panel about his film The Terror: Infamy
and later at the AAJA gala. (Photo: Nandita Godbole)

Attendees also enjoyed an advanced screening of The Terror: Infamy, shaped by George Takei’s real-life experiences in the internment camps where Japanese Americans were held during the Second World War, immediately followed by a press conference with actors George Takei and Derek Mio, alongside executive producer Alexander Woo, as well as a generous book signing by George Takei of his graphic memoir They Called Us Enemy. Takei said that his book was especially for young people who would otherwise not know the dark history of America’s treatment of its Japanese-American citizens.

However, the ultimate highlight of the AAJA convention included a star-studded gala, with short but powerful speeches by George Takei, Senator John Lewis, and political journalist Maria Ressa who had received special permission to attend this event. Each used their platform and their speeches to remind journalists of the importance in clear and unbiased reporting, inclusion and fair representation of people of color, marginalized voices, and authentic stories. 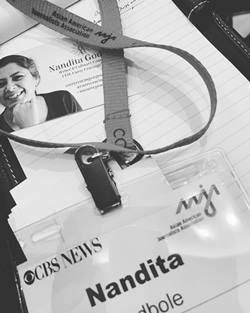 The event was run with the help of many dedicated volunteers whose time was incentivized with compensation of all or part of their attendance fees. At the scale it was, some attendees offered insight on opportunities for improvement.
·Although there were opportunities for networking, including a new member mixer, some newer attendees felt that there could have been more opportunities to get to know their peers.
·Although the event was spread across a single floor in the plush Lowes Hotel, put on by folks who know how to disseminate information, many attendees admitted not being able to find their sessions easily, being lost, missing out because they were misguided, or had stepped away to find meals.
·The local chapter of AAJA shared dining options in the area. However, attendees wished that boxed meals were included as stepping away took away from possible networking opportunities.
·The themes for the sessions appeared well balanced. However, as a convention representing Asian American journalists, there were fewer South Asian journalists in attendance than one would expect.
·There were also fewer sessions directed towards freelancers, as traditional media representatives appeared more eager to network with journalists in the conventional realm of the industry.

Nandita Godbole is an Atlanta based author of many cookbooks and a food-novel. She also writes with pizazz on Indian-American life.