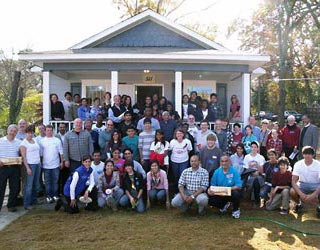 Habitat For Humanity has been building homes for the needy for the past few decades. Their Interfaith project brings together people of different faiths in order to promote interfaith fellowship and understanding. In 2010, Atlanta's Hindu community participated for the first time in this effort, working alongside volunteers from 11 other faith organizations representing Christianity, Judaism and Islam.

About 50 volunteers—many with no prior construction experience—gave their time and enthusiasm from 8am to 4pm on seven Sundays, 10/10-11/21/10, to build a beautiful house for Chelsiea Brown and her two children. Chelsiea works at Grady Health System as a data technician.

All the faith organizations together contributed more than $55,000 for this project. Habitat for Humanity provided the land, tools, materials, and expertise, and helped Chelsiea get a loan for her home.

Every morning before the work started Habitat for Humanity gave a safety briefing, explained the goals for the day and assigned everyone a task. They then split the volunteers into groups and trained them in using the tools and performing the tasks.

Each day, a priest or a representative from one of the congregations spoke about their faith. Dr. Bhagirath Majmudar gave a brief introduction about Hinduism and performed a short prayer on November 14th. Dr. P. Ravi Sarma spoke and led the prayer at the dedication ceremony on the 21st.

Breakfast and lunch were provided by various congregations. Anuj Manocha and family, on behalf of the Hindu community, served a breakfast of donuts, bagels and coffee and a delicious lunch of chicken biryani and idli sambar to all volunteers working on the house on November 14th.

People who had never used power tools learned to use them. Some had never climbed on the roof but here they were, up on the roof nailing the asphalt shingles down. Many were doctors, engineers, and lawyers, yet they didn’t mind the physical labor for this noble cause. Many teenagers and college students joined and helped in landscaping work on the last day of the build.

As a token of appreciation, Habitat presented a plaque at the dedication ceremony to each participating faith group, and Dr. Sarma received the plaque on behalf of the Hindu community. At the end of the project, all were very happy, satisfied and delighted that they were able to help an American family find affordable shelter in their own neighborhood.