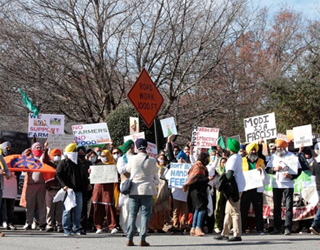 Almost three hundred protestors gathered outside the offices of Consulate General of India in Sandy Springs on December 15, 2020, in solidarity with farmers in India who are fighting against the new farm laws. These protestors were voicing their support in fighting against new agricultural policies that many fear will harm farmers’ livelihoods in India.

Near the intersection of the Glendridge connector and Glendridge drive, a convoy of three buses filled with protestors with signs and flags in hand unloaded. Their slogan was “No farmers, No food!”

“‘No farmers, No food’ means exactly that. With these new laws the government of India is giving a slow death sentence to the farmers!” said Macky Pannu, one of the organizers of the protest. “Nearly 87 percent of Punjab is made up of small farmers that are struggling for the very things we take for granted in this country. It is our duty to help those in need and to remember our roots,” said Dr. Keerat Singh, one of the speakers at the rally.

Over two-and-a-half million farmers have made their way to Delhi from all over India and have been protesting for more than three weeks against the new agriculture laws that abandon the farming traditions of selling produce at mandis (wholesale market) at Minimum Support Prices (MSP) and deregulate crop pricing, allowing private buyers free rein in a marketplace that has long been protected by government subsidies. Farmers believe that these new laws along with no guaranteed pricing will result in exploitation by corporations that will drive down prices and result in small farmers losing their lands to banks and multinational corporations.

“These laws are pushing a majoritarian rule,” said Gursharan Singh Pannu in his speech at the protest. “As a daughter of a farmer and coming from generations of farmers, these issues really hit home. These laws will strip already struggling farmers of their livelihoods and ancestral land. The world is watching the largest democracy and its treatment of its citizens, and these rallies will continue in solidarity with the farmers in Delhi all over the world,” said Rami Mahal, a participant at the protest.

After an hour or so of protest and slogan, a memorandum prepared by the organizers asking for an apology from the Indian government of its treatment of the farmers and urging them to repeal the laws, was given. It was accepted by the consulate with the promise to pass it along to the Indian government.