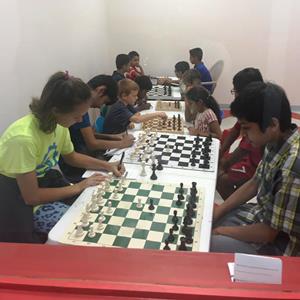 (Left) Two of the top contestants, Agata and Ryan.

BAGA’s first chess tournament was held on August 11, 2019, at the Active Learners League in Suwannee, and was hosted by Mohua Maity and Tushar Manna along with the Bengali Association of Atlanta Sports Committee. Their efforts showcased budding talents in the younger generation. It was a day of fun-filled activity! Twenty participants entered the competition, and two were awarded for their performances:
First Place: Arinjay Banerjee
Runner Up: Ryan Guha

Mohua Maity is a state champion from India, has been a chess coach for the last 5years, and is now doing chess lessons for kids. This event was also conducted in association with Singapore Math, which is a tutoring franchise that aims to enhance U.S. student performance in mathematics with a highly effective teaching approach based on a Singaporean academic curriculum. The organizers that were able to make this event a success on behalf of the BAGA Sports Committee were Kaushik Basu, Amit Singh, and Arindam Chowdhury. Snacks were generously provided by Mohua and Tushar Manna, and pizza by Parimal Majumder. We hope to engage our community with similar events in the near future and want to congratulate the team for their accomplishments!