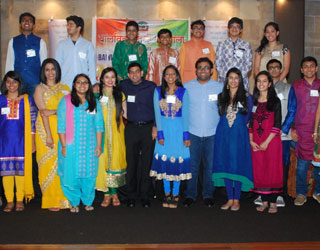 Balvihar Hindi School, an educational program of World Hindu Council of America (VHPA), is one of the longest running culture and language community programs in North America. Balvihar, a shining example of this tradition, recently celebrated its 25th anniversary. The two day event was attended by alumni, students, former and current volunteers, and especially, some of the volunteers involved since the inception Balvihar.

The celebration took off on March 19th, with a gala dinner for alumni, and former and current volunteers at Tadka Restaurant in Alpharetta, GA.  The venue was tastefully decorated with flowers and candles, a memory tree displayed photographs of Balvihar students and volunteers over the period of last 25 years. The old pictures of picnics and cultural programs brought back sweet memories for many of the guests. Also playing in the background was a video chronicling the 25 year journey of Balvihar; a compilation of photographs of past events, messages from alumni and feedback from Balvihar parents. Attendees enjoyed the social hour as they caught up with old acquaintances and made new ones. The formal anniversary celebration opened with a welcome address by Kusum Khurana, VHPA President Atlanta Chapter. Manju Tiwari, a dedicated volunteer of Balvihar and VHPA since 1992, introduced the chief guest and keynote speaker Sanjay Mehta, VHPA General Secretary, himself a veteran Balvihar volunteer in Pittsburg, PA. In his keynote address, Shri Mehtaji applauded the noble goals of Balvihar and the efforts of all volunteers to achieve them. He stressed the need for immigrant communities to stay connected to their roots, even as they actively take part in and contribute to mainstream society. Knowledge of Hindu traditions and values, and Hindi language, helps kids growing up in the US appreciate their own unique identity in a culturally diverse society. 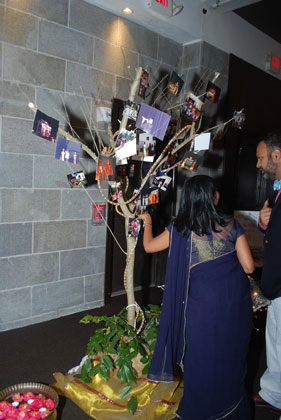 After the keynote address, the alumni were extended a special welcome and some of them were recognized for their outstanding contribution to Balvihar as volunteers. These young volunteers continue to serve as great role models for their peers as well as younger members. Balvihar alumni Nihit Tiwari and Amruta Houde were congratulated for their initiative to start a Hindi language course in Georgia Tech in 2012.

Among the guests were some of the VHPA volunteers who were instrumental in starting the Balvihar program in Atlanta 25 years ago. In early 1990, the VHPA Atlanta Chapter with the help of volunteers conceptualized the very idea of teaching Hindu culture and Hindi language to children, and the seeds of Balvihar were sown. Among them were Prakash and Madhur Gupta, who continue to volunteer in Balvihar till date. On this occasion, Shri Guptaji was felicitated by the chief guest for his invaluable seva. He took the audience down memory lane, sharing their initial struggles to find a venue, teachers and a curriculum. The dedication and determination paid off; Balvihar flourished and evolved into a successful language and culture school. Today, Balvihar has two branches, in Gwinnett and Cobb, with more than 200 students and a large team of committed volunteers.

Guptaji’s reminisces were followed by photo sessions and a delicious dinner. Sabitha Ragunathan, a Balvihar and VHPA volunteer, conducted a few games for the attendees, especially alumni, including building castles with a pack of really slick playing cards. The concluding vote of thanks was given by Madhav Katdare, coordinator of Gwinnett Balvihar, followed by the VHPA Prarthana. The event resembled a large family reunion, a family of young and old volunteers, some active, some retired, all bound together by a commonality of value systems, belief and purpose.

On the second day of the silver jubilee celebration, current Balvihar students presented a cultural program and mela, at Berkmar High school.  Every year, Balvihar students participate in a theme-based cultural program, with every single student performing on stage. This year, to commemorate the 25th year of Balvihar, students presented both a cultural show and an exhibition showcasing the multi-dimensional learning that students experience in Balvihar.

The cultural segment commenced with the traditional lamp lighting by chief guest Sanjay Mehtaji and prayers by students. The MCs for the program, students of the graduating class of Balvihar, took charge of the program from here, introducing the first show “Bharat kee Jhaanki”.  The youngest group of students presented a colorful image of India, dressed in regional attire and greeted the audience in regional languages. This was followed by a Hindi reading competition. Every year, Balvihar celebrates Hindi Diwas by organizing various competitions to encourage students to read, write and speak Hindi. This year, students participated in a reading competition, reading a given passage in one minute, and were judged on their diction and reading skills. The winners of the semi-final round, Roshan Desai and Nimay Patel from Cobb Balvihar and Rohan Desai and Roshni Desai from Gwinnett Balvihar, competed on stage and were judged by a panel of three judges. Rohan placed first, winning the trophy, while all other participants were awarded medals. The Hindi Diwas competition was managed by Neetu Sharma, coordinator of Cobb Balvihar. 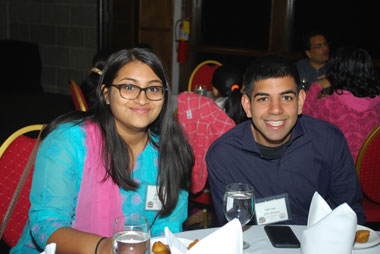 Next, a group of students performed a string of songs and poems based on the motivating theme - with strong determination, any goal can be achieved. The kids sang the famous Nanhe-munne bacchae  teri mutthee mein kya hai, followed by a group recitation of two inspiring poems “Lakshya hamesha bada rakho” by Yogi Saraswat and “Koshish karne vaalon ki kabhee haar nahin hoti” by Harivansh Rai Bacchan. The fluent rendering of the poetry was testimony to the efforts put in by the students and the teachers, and the audience appreciated it with a hearty applause.

This year, Balvihar parent volunteers conducted a series of interviews with parents and alumni to get feedback on the Balvihar program in a bid to evaluate and improve it. The feedback was very positive, along with a few suggestions for changes. Highlights of these interviews were presented to the audience in the form of a short video clip.

The cultural program was followed by a mela in the school cafeteria which was decorated to create the ambience of a village fair. Students of the three highest grades of Balvihar manned eight stations where they explained the various goals of Balvihar and the activities undertaken to achieve them. With the help of posters, quizzes and games, students presented the cultural, social and academic activities they participate in. They talked about the various festivals celebrated in Balvihar, the Graduation ceremony “Guru Dakshina” and the academics and language related games such as spelling bee and reading competitions. The students also highlighted the importance of volunteering and the fact that all Balvihar graduates return as volunteer teaching assistants for at least one year.

As the audience moved around different stations, interacting with students and learning about Balvihar, the last group of performers took their positions. In keeping with the mela atmosphere, a large group of students performed a medley of six fast paced dances. Since no village fair can be complete without food, at the end of the show, all attendees were treated to snacks and mithai (sweets) and hot chai. 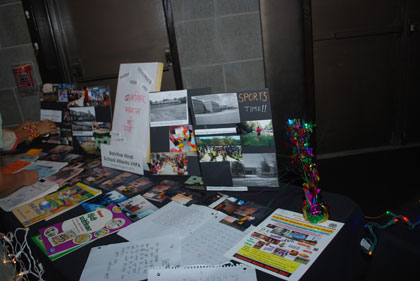 The 25th Anniversary celebration of Balvihar was an occasion of great satisfaction to all who are involved in this program. The goal of Balvihar, since its inception, is to teach Hindu culture and Hindi language, and help students appreciate their rich cultural heritage. Most of all, build confident young men and women who are proud of their roots, and who respect all different cultures and religions, which is the basic tenet of Hindu religion.  The success, and indeed the very existence of such programs, is heavily dependent on the convictions and values of the participants, on both sides of the aisle, the provider as well as the user. As Balvihar grows and evolves, it is staying true to its goal, and it is in step with the growing Indian American community. While the world has changed phenomenally in the past two and a half decades, it is probably safe to conclude that the fundamental goals of life are here to stay and will endure.

Additional photos can be viewed at this link: https://goo.gl/photos/2nD3JCbeasPyYqZz6