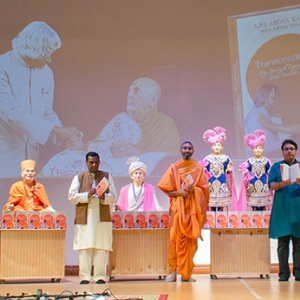 On Sunday, August 16, 2015, the BAPS Shri Swaminarayan Mandir in Atlanta, GA honored the legacy of the late former President of India, Dr. APJ Abdul Kalam with the launch of his final book and gift to mankind, Transcendence. Transcendence documents a 14-year journey between Dr. Kalam and His Holiness Pramukh Swami Maharaj, the fifth spiritual successor of Bhagwan Swaminarayan, who carries forward a legacy of enlightened gurus that goes back to the early nineteenth century.

The event was a tribute to Dr. Kalam’s lifetime of dedicated public service and varied contributions to India’s development as a country. After graduating from the Madras Institute of Technology, Dr. Kalam joined the Indian Space Research Organization (ISRO). While serving as a project director at ISRO, he helped launch into orbit the Rohini satellite, India’s first satellite vehicle. In 1997 he received the Bharat Ratna award, which serves as the highest civilian honor. Widespread recognition coupled with his extensive national service positioned Dr. Kalam as a natural choice for high office. In 2002 he became the eleventh president of India, having formerly served the nation as a world-renowned missile scientist. In his tenure, and long after leaving office, he was affectionately known as the ‘people's president’ due to his ability to bridge the gap between India’s people and their government. 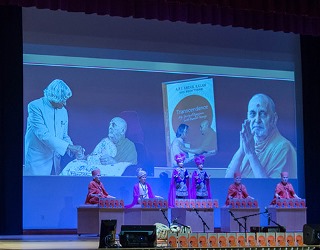 Throughout his remarkable career, Dr. Kalam wrote over 30 books and is considered to be one of India’s most widely read and best-selling authors. In Transcendence, Dr. Kalam’s writings focus on the philosophical and spiritual guidance from Pramukh Swami Maharaj that shaped his purpose and direction in serving India.

Most astonishing about their profound friendship is that Dr. Kalam was not conversant in Gujarati, Pramukh Swami Maharaj’s native language, and Pramukh Swami does not speak English. Despite the language barrier, they were able to transcend communication challenges. The resulting bond, built on selfless service and sustained through common interest, was life changing for Dr. Kalam and is thoughtfully articulated in his writing.

Dr. Kalam’s Transcendence explores one man’s journey to discover universal truths, unlock the science behind progress, and understand the critical role of spirituality in leading India forward. He narrates his visits to historic sites worldwide, religious and secular, while reflecting on the various moments of divinity he experiences along the way. But, as he writes, it is in the presence of Pramukh Swami Maharaj that his spirituality truly flourishes. Dr. Kalam describes Pramukh Swami Maharaj as “my ultimate teacher.” He wrote, “Pramukh Swamiji shared with me many times his wish for peace, development, security and prosperity in the world. He feels that Indian people’s kindness, openness, tolerance, and willingness to engage in dialogue is inbuilt in our civilizational heritage. He firmly believes in the potential of the Indian people to co-build a harmonious world where there is permanent peace, shared prosperity, cooperation and a ‘win-win’ with all other countries.” 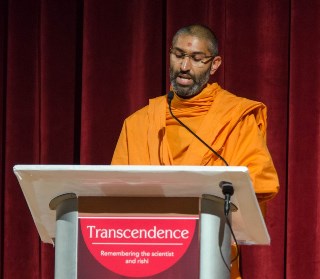 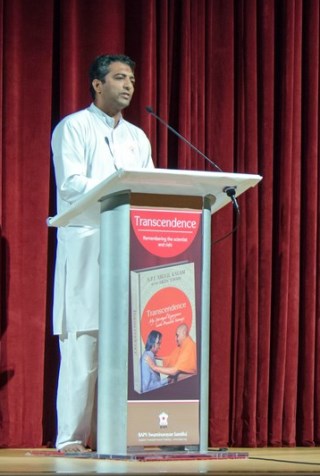 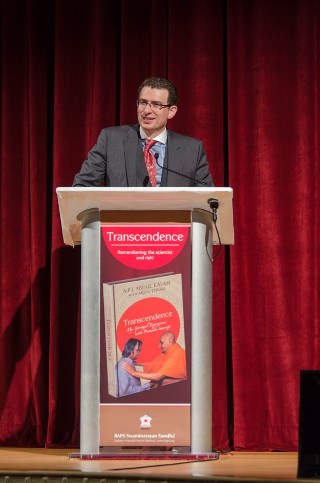 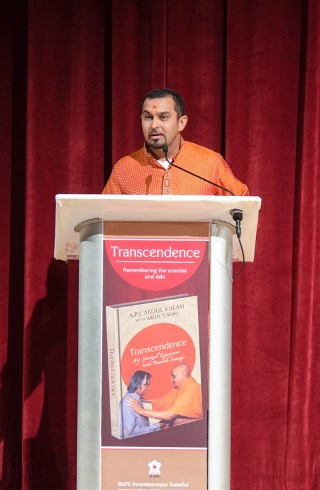 Among those on stage to inaugurate the book were Josh Levs, Sunil Savili, Madhu Tata, Vishwanath Ganti, and Mustafa Ajmeri.

Commenting on Dr. Kalam’s Transcendence, special guest of honor, Josh Levs, a CNN journalist and author from Atlanta, said, “The book is really an incredible journey. This book talks you through universal messages on how to find inner harmony and then how to use that inner harmony to project a more peaceful world around you. It’s a profound telling of this journey of His Holiness Pramukh Swami Maharaj and Dr. APJ Abdul Kalam.”

Commemorating the unique friendship and mentorship between Dr. Kalam and Pramukh Swami Maharaj, the event highlighted Dr. Kalam’s final contribution to his country: his vision for a brighter India through Transcendence. 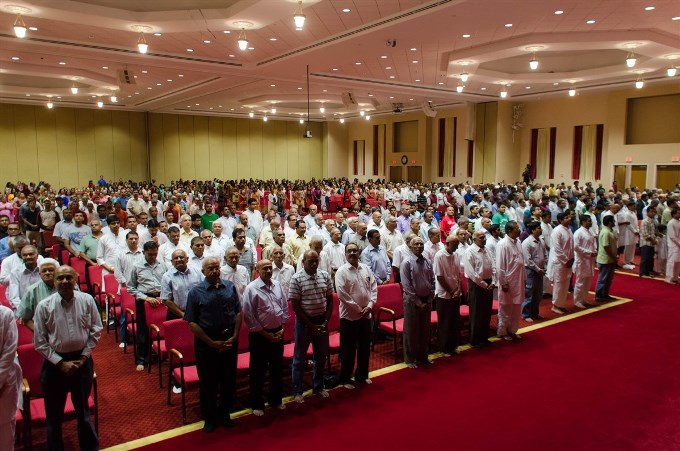 Video:
IFA Launching Transcendence Book at BAPS
Published on Aug 17, 2015
Team IFA is proud and blessed to launch the book, Transcendence on 16-Aug in BAPS.
Transcendence is a book written by Dr Kalam Ji in which he shared his spiritual experiences with HH Pramukh Swami Maharaj.
Although his passing is a loss for India and all humanity, just before he passed away, he left a special gift for all mankind.


[The article above appears only on the website for September 2015, not in the September print/digital issues.] [Posted 9/13/15]