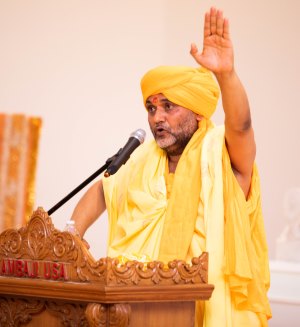 Brahmrishi Swami Guruvanand ji’s 3-day stay in Atlanta from July 6-8, 2018 was a hectic one, as he attended 3-4 programs every day. He is a guru who imparts knowledge of the ancient cultural and spiritual heritage of India. People had the opportunity to hear him and speak to him. Swamiji addressed large gatherings at Shakti Mandir, Lake City; Sadhana Mandir, Global Mall; and at Sankat Mochan Hanuman Mandir, Adairsville, and also visited devotees’ houses.

Swamiji of Tirupati, Andhra Pradesh, has a worldwide following. He holds numerous degrees, including from IIT, Kharagpur. He is an authority in Sanskrit, vedas, and astrology. He helps those in distress, and his Sri Brahmrishi Ashram has various programs serving the troubled, poor, and needy.

Brahmrishi Swami Guruvanand ji says that he is not here to advocate or propagate a new religion but is here to teach the right way of living through the path of spirituality. He said despite different streams of thought, religion is one. Religion should be a way of life. He stressed “Religion does not bind us, but rather frees us from all bondages of deeds or karma.” He advocated that saints and gurus should not give us a cult or a religion but rather the correct path of life, to ensure a smooth and successful transition from the worldly bondages towards and into the Almighty. It is important to lead a life of purpose, a life of meaning. Swamiji’s core teaching is that we should lead a morally uplifting and spiritually fulfilling life, leading to overcoming karmic debts while fulfilling worldly duties. He said that his life mission is to reach out to as many people as possible to spread the message of awareness, self-realization, humanity, and peace.

Extensively quoting from Vedas, epics, Bhagavad Gita, and other texts, Swami ji said that as you embark in your quest for meaning in the modern world, you are bound to discover the inner deep connections that unite the scientific temper of enquiry and experimentation on the one hand and the Vedic spiritual vision of growth and dynamism on the other. His discourses were filled with appealing anecdotes, humor, simplicity, compassion, and demonstration of his understanding about a wide range of issues related to life. Swamiji started all his discourses not only invoking prayers of ancient order of monks in the world but also saluting Gandhi, Swami Vivekananda, and others.

Each discourse was 3 hours long and people patiently listened He stood for hours although he is more than 80 years old.

Brahmrishi Swami Guruvanand Ji gave tips about life, peace, meeting basic human needs, leadership, etc. Here are some examples:
-Know faith, no fear. No faith, know fear.
-A complaining mind is never peaceful. A mind filled gratitude is always peaceful.
-Argument is done to find who is right; discussion is done to find what is right.
-Try and fail, but never fail to try.

Swamiji asked the audience at the gatherings to chant certain mantras after him for themselves and for society. He also asked people to clap, laugh, raise their hands.