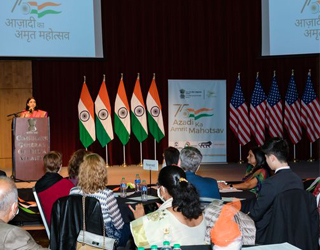 On January 26th, the Consulate General of India in Atlanta celebrated India’s 73rd Republic Day with a host of events highlighting India’s values and diverse culture.

The celebrations began in the morning with a flag hoisting ceremony at CGI Atlanta. After the ceremony, Consulate General Dr. Swati Kulkarni read President Ram Nath Kovind’s address to the nation, which highlighted India’s success in holding the world’s biggest vaccination drive, achieving improvements in the agriculture and manufacturing sectors, becoming one of the world’s leading naval powers, and empowering women in the armed forces. 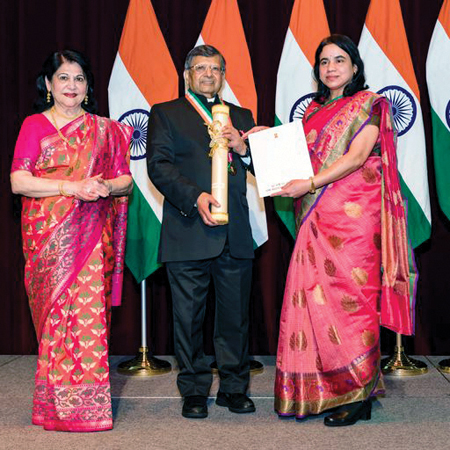 Following this event, CGI Atlanta held a cultural evening and reception which was attended by more than 250 dignitaries and leading Indian-Americans in the Atlanta community. The reception began with video messages from Senators Sheikh Rahman and Ed Harbison; Dr. Michelle Au from Georgia’s General Assembly; Broward County Commissioner Steve Geller; and Johns Creek City Councilman Bob Erramilli among others. The reception was then led by Consul Madan Kumar Ghildiya who invited Jyothsna Nanu and Manasa Prasad to sing the Indian and American national anthems.

Dr. Kulkarni then gave a speech that emphasized the power of India’s diversity, democracy, and dedication to development as well as the nation’s improvements in healthcare and economic progress. Dr. Kulkarni shared that she has met with over 105 federal and state representatives during her tenure. She also appreciated the statements and tweets in favor of India made by members of Congress from the Southeast U.S. She shared that over the course of the past four years, the CGI Atlanta team has coordinated T20 cricket matches between India and the West Indies at Fort Lauderdale, brought Bollywood filmmakers to shoot in Alabama (and soon Atlanta too), coordinated the 2019 Howdy Modi Summit in Houston, held over 150 commerce and education- related events, increased investments by the Florida and Tennessee Boards of Administration, organized 30 Consular camps that reached out to over 5,000 people, and conducted the Vande Bharat mission to help 600 Indians, who were stranded in the U.S. during the pandemic, in returning home.

Following the speech, Dr. Kulkarni presented, on behalf of President Kovind, the Padma Bhushan Award for the year 2020 to Dr. Jagdish Sheth of Emory University for his work in the fields of literature and education. Dr. Sheth expressed his gratitude for the award and said the award belonged to the communities he comes from and represents their successes.

The cultural evening was emceed by Smitha Sai and consisted of an array of performances that showcased India’s cultural diversity. The Georgia Chapter of the Odisha Society of the Americas presented Project Vande Mataram, an Odissi dance performed by the students of Abhinaya Dance Academy. A team from Muzhanghu Parai of Atlanta performed Parai Attam dance. Students of Prem Dance Studio performed Chhatrapati Shivaji Maharaj, a dance drama to commemorate his life and memory.

These Republic Day celebrations were part of the Azadi ka Amrit Mahotsav initiative to commemorate India’s 75 years of independence, which began on March 12, 2021 and will continue until August 15th, 2023.

The event was coordinated by Rajiv Bhattacharyya, Head of the Chancery, along with the Consulate staff.