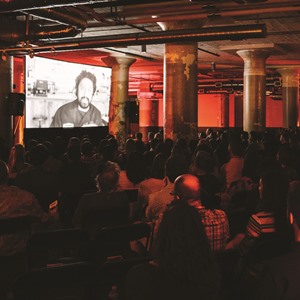 The mission? “Eat everything in sight” – in 10 destinations in 10 days! Not surprisingly, a packed audience came out to enjoy on film this enviable epicurean journey. (Photo: Andrew Thomas Lee)

Two years in the making, the 45-minute culinary travel documentary Cutting Chai, made by the Chai Pani (CP) restaurant team, premiered at the 40th anniversary Atlanta Film Festival on March 10, 2016, appropriately enough, at Ponce City Market. A reception before the screening featured Indian-spiced movie popcorn, Indian-inspired gin and cardamom cocktails, and classic Indian sodas, and an after-party gave a preview of the Indian grilled street snacks inspired by the documentary that will be main menu items at restaurateur Meherwan Irani’s newest location, called Botiwalla, planned to open soon in Ponce City Market.

Two-time James Beard-nominated chef and owner Irani led his team of head chefs as they traveled and ate their way through India. CP Decatur chef Daniel Peach, CP Asheville chef James Grogan, CP’s brand director Michael Files, and Asheville-based Irani “eat everything in sight” through ten cities in ten days by trains, planes, and auto-rickshaws. The 10 “chapters” begin with searching for the perfectly brewed, milky sweet, kadak (strong) cup of chai. Moving on, they delve deep into the country’s rich cultural history in cities like Amritsar and Jaipur—each entertaining section titillating the audience’s taste buds as the team samples the region’s street foods such as pani puri, desi-Chinese fare, thali, and vada pav.

In Rishikesh, located on the banks of the Ganges and often hailed as the “yoga capital of the world,” chef Daniel Peach took the crew back to the sweets factory where he used to work, noting how the greasy floors, open diesel fuel lines, dirty containers would never pass the stringent US-food sanitation laws. Though some may see shock value in that there was not a single hand towel amongst the sweet factory workers, all the crew agreed that there was a deep sense of pride in those cooking the food. “Though labor is cheap in India, there is a peace with the workers—they have found that balance between dharma (duty) and karma (destiny), and you can taste that in the dishes hand-crafted by these hard workers,” Irani said. 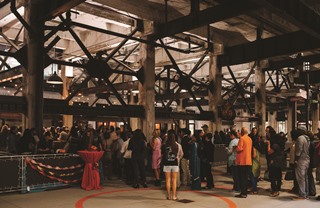 Irani chose Atlanta to open restaurants because, “It is the right combination of people and location in a cosmopolitan marketplace,” he said. If Atlanta’s street food concept is to be measured by the success of Chai Pani’s long list of local restaurant awards, as well as long customer satisfaction ratings, then Botiwalli is sure to be a crowd favorite. Its menu is influenced by the history of street food, especially nonvegetarian street kebabs, as in the after-party: chicken and paneer kebabs prepared over an open grill, and pani puri served from a lahri (cart). The DJ spinning Bollywood tunes got everyone in the spirit.

Anish Patel, event partygoer who has not been to India, commented that, “Cutting Chai was an entertaining film because it used food as its backbone, and the best way to learn about a culture is through food.” Irani seems to have the right touch serving culture through restaurants, and now movies, too!

Richard Eldredge, a journalist and editor who covers the Atlanta scene, conducts a Q&A with Meherwan Irani and team, after the screening. (Photo: Andrew Thomas Lee)

Background info on the topic of CUTTING CHAI

Links:
1) Recipe: There would be nobody in Mumbai who would not know Mumbai’s cutting chai . Lemme explain for people who don’t know chai is tea and cutting means one cup is divided into 2 , sometimes even into 3 in the special tea glass.
http://www.flavorsofmumbai.com/mumbai-cutting-chai-recipe/

Videos:
1) Archit Chawla
Published on Oct 15, 2013
Trying to stay in mumbai , and you havent been affected by this cult thing that is pretty impossible..just a small documentary how this CUTTING chai effects mumbai and mumbaikars.
https://www.youtube.com/watch?v=fmjin-5i8p8

2) FoodMad: What do you like to have with your cutting chai?
NDTV Good Times
Published on Sep 14, 2014
Every evening when the clock strikes 5, what is that one snack that your body craves? The one dish that dances tantalisingly in front of your eyes. For Rocky and Mayur, it is all things fried and crunchy right from Samosas, Cutlets, Kachoris, Fish Fry to Dosas with a dollop of Tiramisu. Watch the duo as they hop from Kolkata to Delhi to Bengaluru to Mumbai to satisfy their Chai Time Cravings!
https://youtu.be/1PNXQe6oVeA

3) Cutting Chai - Full Length Comedy Hindi Movie with the same name
Published on Nov 15, 2014
The film has delved into the psyche of the youth who may survive on cutting tea but ready to conquer the world. it is a story of four friends.
https://youtu.be/LCWZtaFbg0k