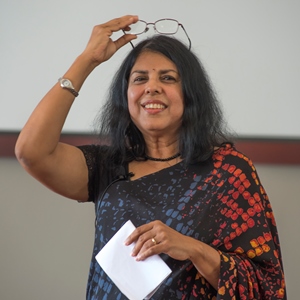 On September 23, 2018, renowned author, poet, activist, and professor of creative writing at the University of Houston, Chitra Banerjee Divakaruni, was the invited speaker for Emory University’s 18th annual Sheth Lecture in Indian Studies. Sharing the honor with past keynotes of the Sheth Lecture Series such as author Salman Rushdie, filmmaker Deepa Mehta, and social activist Medha Patkar, Divakaruni spoke about “Celebrating Diversity and Building Bridges.”

The afternoon began with a glowing and insightful introduction of Divakaruni by Deepika Bahri, professor of English at Emory University. However, as Professor Bahri pointed out, Divakaruni didn’t really need an introduction. An author of more than 15 best-selling books and a winner of several awards including the highly acclaimed American Book Award, Divakaruni has been paramount in giving a voice to the Indian-American immigrant experience. Through her stories about the challenges and life experiences of first- and second-generation Indian-American women and inspirational characters from Indian mythology, she has sought to share the truths of the Indian-American community with the American society at large. A number of her works have been optioned to be made into movies or TV serials. Professor Bahri recognized Divakaruni for bringing beauty, wisdom, and insight into the lives of people through her accurate observations about human relationships. 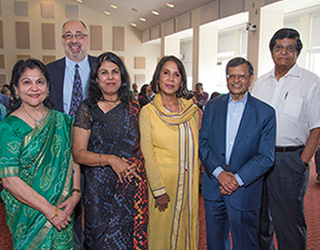 Divakaruni then took the stage amid loud applause from a packed audience full of writers, avid book readers, faculty, students, and community members. She reiterated the importance of sharing our stories especially in today’s times, when there’s so much apathy, and even pushback, towards diversity and immigration. She emphasized the role of stories in helping communities understand each other and explained how her activism in the field of domestic violence had shaped her thought process and inspired some of her stories. 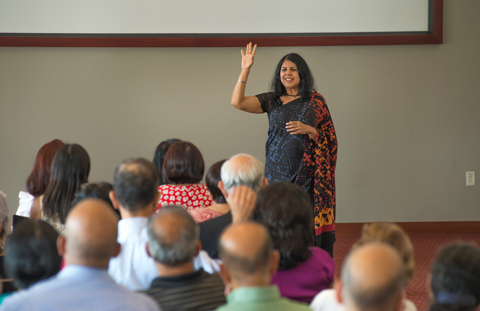 In fact, it was Divakaruni’s immigration to the United States that prompted her to become a writer. Her move to Ohio as a Masters student not only made her appreciate India in a way she never had before but also made her question the status quo. She talked about how much she loved India, missed it terribly, and worried about forgetting her roots. Writing, then, was an exercise to keep the memories of her loved ones alive. She decided that the story of immigration is the story that she would tell “because that story started a long time back, is still powerful, and is always changing.”

Divakaruni encouraged budding writers not to give up on their aspirations. Citing her own example, she advised them that if they truly work at it and get some good instruction and feedback along the way, they can become excellent writers. She then read a powerful passage from her book The Palace of Illusions about the classic scene from the Mahabharat, Draupadi Vastraharan. The passage depicted how Draupadi viewed her own humiliation at the hands of her family, and how Krishna saved her from falling from grace not only in front of her family, but more importantly, in her own eyes. She also read a passage from her 2016 novel, Before We Visit the Goddess, which tells the tale of three generations of mothers and daughters. The remarkable imagery, play of words, and drama in the passages left the audience spellbound and speechless.

During the interactive Q&A session, Divakaruni narrated the influence her grandfather had had on her. Calling him the “first storyteller” in her life, Divakaruni believes that there are glimpses of the characters from his stories in a lot of her books. She also talked about being influenced by two different kinds of writers, those from Bengal, like Tagore and Sarat Chandra Chattopadhyay, and those from the United States, such as Maxine Hong Kingston, Cristina Garcia, and Amy Tan, all of whom created memorable female protagonists in their stories. A pioneer of women’s rights herself, Divakaruni’s novels understandably take the readers on a journey into the woman’s heart, with all its idiosyncrasies, passions, emotions, and complexities. However, she reminded readers that her books only portray a sliver of the community and her honest attempt at understanding it. It is important to read a variety of authors to comprehend an entire culture.

As the afternoon drew to a close, audience members got a chance to get some of their favorite Divakaruni books signed by her. Over some chai and vada-pav, they mulled over the honesty and humility of her books and the strength of her characters. The afternoon left everyone with one overwhelming thought shared by Divakaruni that, despite our differences, what we share on a human level is far deeper and far truer than we would like to admit.

About Chitra Banerjee Divakaruni:
Indian-American writer Chitra Banerjee Divakaruni is an award-winning author, poet, activist and teacher. Common themes in her writing include the Indian experience, contemporary America, women, immigration, history, myth, family, and the joys and challenges of living in a multicultural world. Her books have been translated into 29 languages, and her work has appeared in over a hundred magazines and anthologies.

Divakaruni will share about her experience as an immigrant at the 2018 Sheth Lecture in a talk titled, "Celebrating Diversity and Building Bridges." Her lecture will touch on major themes in her writing: creating understanding and developing community even in the context of public or personal crises.

Divakaruni is the Betty and Gene McDavid Professor of Writing at the University of Houston Creative Writing Program. Her short story collection, Arranged Marriage, won an American Book Award in 1995. Two of her novels (The Mistress of Spices and Sister of My Heart) as well as a short story, "The Word Love," were adapted into films. Mistress of Spices was short-listed for the Orange Prize. Currently, Sister of my Heart, Oleander Girl, Palace of Illusions, and One Amazing Thing have all been optioned to be made into movies or TV serials. Apart from poetry collections and stories for young adults, Divakaruni has 11 novels to her credit.