“Churning of the Milky Ocean” raises funds for cataract surgeries 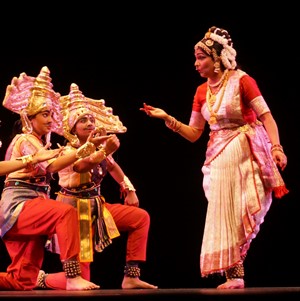 Guru Sasikala Penumarthi of the Academy of Kuchipudi Dance was producer and director of the ballet, and also portrayed the role of Jaganmohini. (Photo: Prof. Vasudha Narayanan)

The Atlanta chapter of the Sankara Nethralaya Opthalmic Mission Trust (SN OM Trust), a 501(c)(3) nonprofit, organized a sold-out show of “Ksheera Sagara Mathanam” Kuchipudi dance ballet. Enthusiastic donors and supporters showed up on the afternoon of September 9, 2018 at the Infinite Energy Center, despite incessant rain.

The event raised a total of $75,000 to provide the gift of eyesight to about a thousand needy, economically disadvantaged individuals through cataract surgeries in India—with a donation of $10,000 from Rajasekhar Reddy Aila under the Adopt-A-Village program benefiting Ilavaripalli, Chittoor District of Andhra Pradesh where Sankara Nethralaya will be organizing a camp in September of 2019.

Dr. Vasudha Narayanan, Distinguished Professor of Religion and an expert on world religions with a special focus on Hinduism, from University of Florida, graced the occasion. Celebrity flute player Nagaraju Talluri of India; Allen Bell, Arts Education Manager, Georgia Council for the Arts; and Professor Joyce Flueckiger and Senior Lecturer Tara Doyle from Emory University Religion Department were also among the attendees.

Bala Indurti, Trustee of SN OM Trust, welcomed the guests and told them about the Trust’s mission. He also introduced Pramod Sajja of Paramount Software as guest of honor and spoke of Mr. Sajja’s unflinching financial support to a variety of worthy causes.

Trust Vice President Dr. Seshu Sarma paid tribute to late Vempati Ravishankar, a great Kuchipudi artist to whom the ballet was dedicated. Ravishankar, the youngest son of Padma Bhushan, Late Guru Dr. Vempati Chinna Satyam, she said, was remembered for his unparalleled performance as Siva in Ksheera Sagara Mathanam, staged in Atlanta in 1994. He reached his heavenly abode at the young age of 49 earlier this year. Then she introduced the show “Ksheera Sagara Mathanam” (Churning of the Milky Ocean) with a special emphasis on the hidden meanings and symbolisms of the story, and their application to dharmic living.

For the next two and half hours, the mesmerized audience was transported into the world of devas and asuras (angels and demons). The scenes depicting the devas approaching Lord Vishnu for his guidance on being relieved of the suffering by the asuras; upon the Lord’s guidance, devas using diplomacy to team up with the asuras for churning of the milky ocean, ably supported by the mighty serpent Vasuki; the emergence of poison from the ocean and its graceful acceptance by Lord Shiva; the arrival of the divine physician Dhanvantari, Goddess Lakshmi, and numerous other treasures—all unfolded in visual splendor. The epic portrayal concluded with the arrival of Lord Vishnu in the form of Jaganmohini and His rescuing the devas from the asuras and giving them the nectar of eternal life. 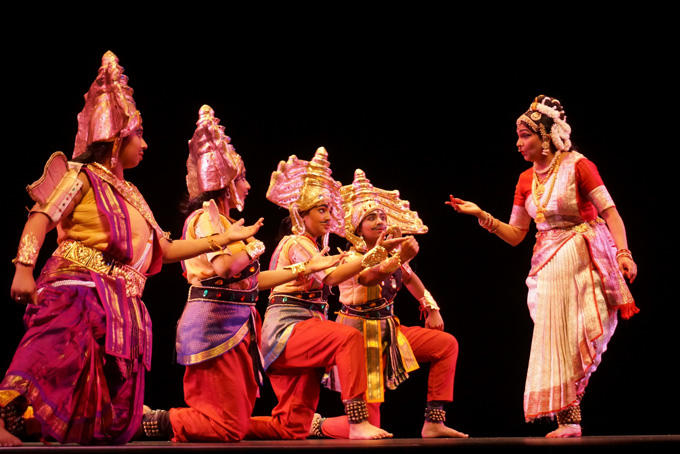 Guru Sasikala Penumarthi of the Academy of Kuchipudi Dance was the producer and director of the ballet, and also portrayed the role of Jaganmohini in a spellbinding manner. She thanked the actors, production crew, and volunteers who made the event possible, and paid tribute to the composer of the ballet, a stalwart of this art form, the Late Padmabhushan Guru Vempati Chinna Satyam.

Thanks:
Guru Sasikala’s husband Ravi Penumarthi co-planned the event.
The program concluded with the vote of thanks by Moorthy Rekapalli, trustee of the SN OM Trust, who recognized many who made the event a tremendous success.

Special credits go to the students who assisted throughout the drama: Ratika Kavuru, Sudha Somayajula, and Sesha Lakkakula.

SN OM Trust thanks all the donors, volunteers, artists, and supporters of the event and appreciates the tremendous support of the broader Indian community of Atlanta.