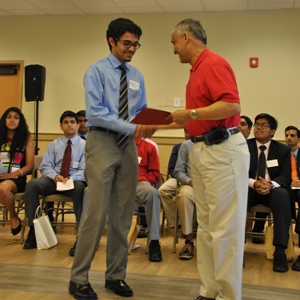 On June 1, 2014, the nonprofit Indian American Scholarship Fund (IASF) hosted their 21st annual banquet at the Atlanta International School to honor the Atlanta area’s Indian-American class of 2014 and present scholarships to the merit worthy as well as financially needy. A ‘college room’ was also organized by Dr. Ritu Lothia so that college students from Georgia Tech, University of Georgia, Georgia State, and Emory could answer questions from the high school seniors before they enter college.

This year’s class was very accomplished: two students received perfect scores on the ACT as well as the SAT, and 10 students scored higher than 2290 (99th percentile) on the SAT. Nine students scored higher than a 33 (99th percentile) on the ACT. Five students were either Valedictorians or Salutatorians, and fourteen students were in the top 5% of their class. Honors included one Baush and Lomb Science Award winner, eight National Merit Scholars, one presidential scholar, and 5 STAR students. This class not only excelled in academics, but seven lettered in varsity sports, eleven students were also employed during their senior year, four were classical Indian dancers, and one was student body president. On top of all of this, there was significant volunteer and community service, including for Habitat for Humanity and Beta Club.

The banquet started with an introduction by Dr. Anuj Manocha, IASF chairman, who spoke about the history of the organization and introduced the committee: Ibrez Bandukwala, Akarsh Belagodu, Naveen Dittikavi, Sekhar Ghosh, Wab Kadaba, Rajesh Kurup, Ritu Lothia, Sangeeta Mayur, Deepa Muralidhar, and Anu Whitaker. Nivedita Garabadu, the IACA president, presented each member of the graduating class with a gift. With great support from the donors to the families and students of the class of 2014 with financial need and merit achievement, IASF was able to award twenty-two scholarships, including three 4-year scholarships, three 2-year scholarships and six 1-year scholarships totaling over $35,000.