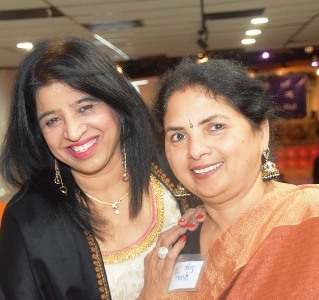 (Left) Kamlesh Chugh with one of the organizers, Manju Tiwari.

Hindi Urdu Sanjhe Bol is a program of poetry recitation that is eagerly awaited by Atlanta’s poets and recitation artists. Participants are creative individuals who write and recite their own poetry.

This is the eleventh year of Hindi Urdu Sanjhe Bol. It is not an easy task to bring together various poets on this stage for so many years; their love for the language has made this possible. This is a platform for Hindi and Urdu speaking people, and not restricted to any nation.

The program started with a minute of silence in remembrance of the soldiers killed at Pulwama. Chief guest Consul Shailesh Lakhtakia spoke a few words, heartily praised the efforts of the organizers, and then left the stage for the creative artists.

The subject for this year’s recitation was comic or fun poems. Since not all poets write in this rasa, they also had permission to recite poems of other subject matter. Even then, all participants tried to present something in this subject, and were successful in tickling the audience. The content of the works was quite entertaining: Facebook, the marriage of flies, shopping at Costco, politics—all were covered in their poems. There were also philosophical and patriotic poems. The program was about one and half hours long and enjoyed by more than 100 people who filled the venue.

At the end all the volunteers were thanked—any program needs the help of a few people. Manjusha Verma, Puneet Bhatnagar, Rachana Gupta, Asha Gupta, Sarfraz Khan, Pavandeep Singh, Sagar Pujari, all were thanked. Special thanks went to Sri Anil Bhagat and Sri Shyam Tiwari, who have helped their spouses in each such program.

The organizers thanked Dr. Naznin and Shamim Dalvi who provide the venue each year for this program. This time they were also helped by other businesses that provided tasty food after the program. The evening ended with discussing the poems along with the dinner, and hoping to meet again next year.