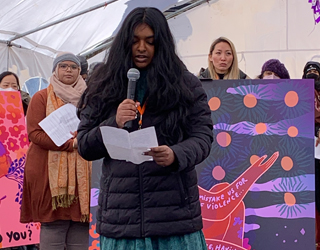 On March 12th, Asian Americans Advancing Justice- Atlanta and the Asian American Advocacy Fund held a Community Remembrance Event in Blackburn Park in Brookhaven to commemorate the death of eight people in the Atlanta spa shootings on March 16th, 2021.

Over 150 members and leaders of the Atlanta community came to honor the lives lost. Among those in attendance were Georgia General Assembly members Representative Sam Park, Representative Bee Nguyen, Representative Erick Allen, and Senator Michelle Au as well as Deputy Assistant to the President Erika Moritsugu, Gwinnett County Commissioner Kirkland Carden, and Atlanta City Council Member Amir Farokhi among others. 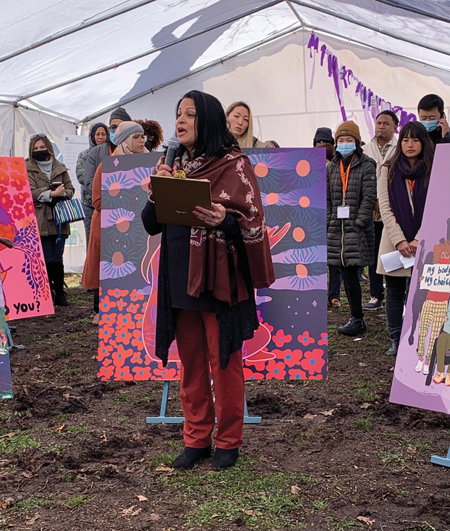 The event was emceed by Aisha Yaqoob, the Executive Director of the Asian American Advocacy Fund. Phi Nguyen, the Executive Director of Asian Americans Advancing Justice-Atlanta, initiated the event by leading the community in a moment of silence to honor the eight lives lost in the shooting before giving a speech that highlighted the role that systemic racism, white supremacy, gender-based violence, and war in America and abroad played in the killing of the six Asian women targeted in the shooting. Nguyen urged the Asian American community as well as the leaders present to recommit to dismantling these systems.

A young Sikh American and social justice advocate, Japjee Singh, then shared a short speech that touched on the irony of American culture’s fascination with ethnic culture and cuisine on one hand and the systematic oppression of the communities of color that produce them on the other.

Afterward, Soyoung Yun, a Korean American mental health specialist who served victims of the shootings and their families, discussed the enduring trauma the shooting and similar attacks have inflicted not only on victims but also on the broader Asian American community. Yun also highlighted the progressive changes she noted in the year following the shooting and emphasized the importance of unity in continuing to move forward. 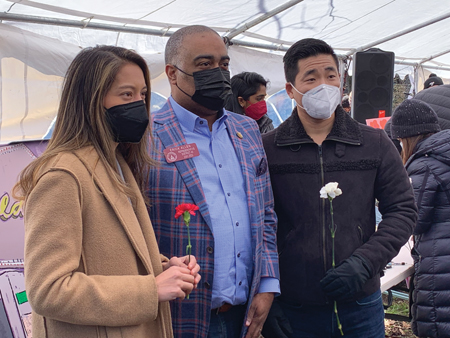 Following Yun’s speech, Robert Peterson, the son of Young Ae Yue, one of the victims, spoke on the tragedy on behalf of his family. “[My mother] just wanted to work, to provide for her family, and to enjoy life with her friends. And someone took [her] away from us at a time when my brother and I needed her the most.… Our family not only grieves on March 16th but every day,” shared Peterson. He thanked the community for supporting his family in their time of need and shared his thoughts on what his mother would have wanted saying, “She would ask that we do not allow her and other victims to be victimized in vain but to speak out so that the next generation can live without fear and be recognized, be seen fully as humans.”

Deepa Iyer, a South Asian American writer and advocate, gave a short speech outlining the rise in attacks and discrimination against Asian Americans since March of 2020 and the historical roots of the racism that continues to plague communities of color. Iyer encouraged the development of an ecosystem of support between Asian American communities and in the broader Atlanta community. The event concluded with the National Student Poet for the Southeast and Atlanta’s Youth Poet Laureate, Anika Eragam, reading her poem Resurfacing.

When speaking with Khabar, Atlanta City Councilman Farokhi shared his hopes for the change brought about the Remembrance Event and the tragedy it commemorates saying, “I hope that we don’t forget what happened, that we share the grief of the tragedy that happened a year ago. I hope what comes out of it is a sense of connectedness to one another. I hope for an Atlanta where people look out for one another whether you’ve been here for a month, or you’ve been here for generations.” He also shared the changes he has seen in the Atlanta community in the year since the shootings remarking, “It’s sad that it’s a byproduct of the murders, but I think there’s been an increased visibility of the Asian American community and the wide array of stories people have as to why they’re here in Atlanta, what brought them here, and I think it’s helped us remember that our community is diverse and that’s a strength. It should never be in the shadows.”