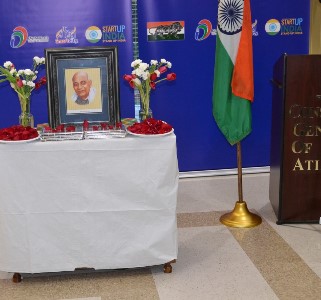 The Consulate’s Head of Chancery, Mr. Shailesh Lakhtakia (right) warmly welcomed all and spoke briefly about Sardar Patel. He said that Sardar Patel, a great patriot, statesman, senior leader of the Indian National Congress and founding father of the Republic of India, who played a leading role in the country's struggle for independence and its integration into a united, independent nation, will not be forgotten. He is often compared to Germany’s Chancellor and Prime Minister Otto Von Bismarck, but whereas Bismarck unified Germany involving 39 states, Sardar Patel did a much bigger task involving 562 states; hence Patel’s contribution is worthy of great recognition and respect. Churchill was known to scoff at Gandhi and Patel. But fearless Patel once strongly retorted as quoted in B. Krishna’s book, India’s Bismarck. Churchill was impressed and lauded Patel! (For details, see Website Bonus Feature below.)

Consul General Kulkarni (left) welcomed all to the Bhartiya Ekta Day celebrations, to celebrate the unity of India, to which immense contribution was made by Sardar Patel, the “Iron Man of India.”

“The biggest gift he gave was unity,” she said, “and in his honor I request you all that we should take this pledge today.” All stood as she led the gathering in reciting the Rashtriya Ekta Divas Pledge, first in Hindi and then in English, for preserving the unity, integrity, and security of India. Attendees then offered floral tributes to Sardar Patel.

Bikash Kumar (left), secretary to the Consul General, read an uplifting Hindi poem that he had composed to mark the occasion.


Vinodbhai Patel (left) gave a brief history of the Sardar Patel Foundation. Referring to Hindi movie Mera Gaon Mera Desh (My Village, My Country), he related that Sardar Patel used to say “Mera desh mera gaon” because he had the welfare of all India in his heart. He also advised the youth to be innovators and job-givers rather than job-seekers. Speaking of the new statue, he said that it is not merely a statue but a symbol of oneness. He recognized attorney Chandler Sharma.

Vasudev Patel (right) shared Sardar Patel life story. He was born on October 31, 1875, in a farming family in a small village in Nadiad, Gujarat. When about seven years old, he had a huge boil under his arm; his family could not afford a physician so invited a barber to help—but the young boy lanced his own painful boil without hesitation, even as the barber trembled watching him. He wanted to study law in England. When the pass and ticket arrived it was addressed as V. Patel. His elder brother’s name was Vithalbhai, so both had same initial V. His brother also wanted to study law so Vallbhbhai let him go first.

Later he went to England, became a barrister, and then had a flourishing law practice in Ahmedabad. He used to wear suits and tie and in the evening go to the Club, play bridge, and smoke cigars. But he gave it all up and joined Gandhi in India's Independence struggle. He burned his British clothes and started wearing dhoti and kurta. He galvanized farmers in Gujarat in a nonviolent revolt in getting harsh taxes repealed. He was imprisoned several times. In prison, he and Gandhi bonded like brothers. He played an active role in the Quit India movement. He led the monumental feat of integrating into the newly independent nation approximately 565 self-governing princely states. As the first Deputy Prime Minister, and Min. of Home Affairs, he unified the country, earning the sobriquet ‘Iron Man of India.’

It was noted that in India, Prime Minister Narendra Modi inaugurated the “Statue of Unity” of Sardar Patel (the world’s tallest statue at 182 meters), to coincide with this birth anniversary.

Patel once strongly retorted to a remark made by Churchill, as quoted in B. Krishna’s book, India’s Bismarck. Churchill was impressed and lauded Patel:
Churchill: In India, power will go into the hands of rascals, rogues, and free-booters. These are men of straw of whom no trace will be found after a few years.
Patel: You are an unashamed imperialist at a time when Imperialism is on its last legs. You are the proverbial last ditcher for whom obstinacy and stupid consistency count more than reason, imagination, and wisdom. I should like to tell His Majesty's government that if they wish India to maintain friendly relations with Great Britain, they must see that India is no way subjected to malicious and venomous attacks of this kind, and that British statesmen and others learn to speak of this country in terms of friendship and goodwill.
Churchill: I thoroughly enjoyed your retort. I have nothing but admiration for the way the new dominion has settled down to the tasks and responsibilities. Mr. Patel, you should not confine yourself within the limits of India, but the world is entitled to see and hear more of you.

The Rashtriya Ekta Divas Pledge:
“I solemnly pledge that I dedicate myself to preserve the unity, integrity and security of the nation and also to strive hard to spread this message among my fellow countrymen. I take this pledge in the spirit of unification of my country which was made possible by the vision and actions of Sardar Vallabhbhai Patel. I also solemnly resolve to make my own contribution to ensure internal security of my country.”