Council of Hindu Temples of North America meets in Atlanta 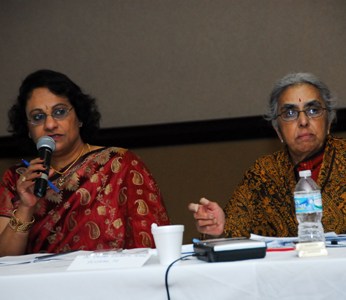 The Council of Hindu Temples of North America (CHTNA) meets annually at one of the temples in the United States. This year, the Hindu Temple of Atlanta (HTA) in Riverdale, Georgia, hosted the annual meeting on Saturday, April 19, 2014. Representatives of about 21 temples came from different parts of the nation. After a delectable breakfast, the Temple priests performed an invocation ceremony. President of HTA, Narender Reddy, welcomed all and requested the attendees to introduce themselves.

CHTNA is a nonprofit Hindu organization established in 1984 as an umbrella organization to represent Hindu temples in North America. It is governed by 9 temples as Board of Directors and has its Secretariat at the Hindu Temple Society of North America, NY. The Council speaks on subjects affecting Hindu religion and culture. It also maintains a directory of all the temples and publishes periodic newsletters; prepares and publishes (North American) Panchangam (almanac) per US time; assists member temples with visas for religious workers, benefits such as medical/life insurance, pension plans, interfaith and intrafaith activities and management of the Temples; offers collective bargaining power with supplier/vendors; shares common resource pools, such as priests, musicians, artists, spiritual leaders, etc.; shares ideas/experiences, such as compliance with state/federal regulations, issues related to temple management, internal/external conflicts of interest, temple security, and involvement of Youth for continuity; and recognizes and honors humanitarian and other religious services. 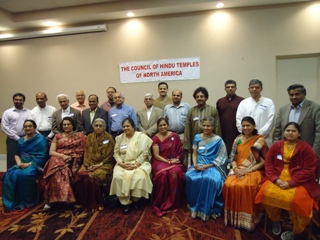 A financial consultant explained how to set up endowment trust funds for the temples. Dr. Uma Mysorekar shared her experience in the effective management concepts she followed in her temple. Valuable group discussion followed about practical issues, possible solutions, and management concepts practiced in several temples. Attendees also shared ideas about religious visas, health insurance benefits for temple employees; and temple safety and security issues. Extensive discussions focused on involvement of the next generation in temple activities and increasing the membership strength by increasing the awareness of the benefits of playing a proactive role in temples as well as CHTNA. Work assignments for 2014-15 were discussed and distributed.

HTA’s Youth Committee Chairperson Hemanth Grandhige thanked the temple for enlisting youth to play an active role in both service-oriented and socially-oriented activities. He noted that it was heartening to see children engaged in Bal Vihar programs and music and dance lessons at the Temple but lamented that these children drifted away from the temple when they grew up. As a result immigrant-generation rather than second-generation adults and youth continue to be a strong presence in HTA’s management and events. In India, he noted, a devotee may visit a temple for a few minutes, whereas in the U.S. he is likely to spend more time because a temple plays a much bigger role as both a place of worship and a community center, so it ought to involve people of all ages to serve the community and to ensure a bright future.

A special dharshan and pooja ceremony was held upstairs in the temple, and a sumptuous dinner was organized by Food Committee Chairperson Dr. Seshu Sarma, Chef Rama Krishna, and volunteers. Prior to dinner, the delegates were regaled with a scintillating classical dance program coordinated by Veena Venkat Raman, Chairperson of the Cultural Committee, and performed by talented students of dance and music academies led by Atlanta’s Padmaja Kelam, Jyothi Chintalapudi, and Bhavini Subramani, respectively.