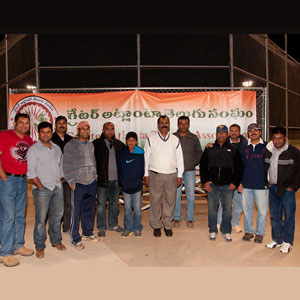 On September 24th -25th and October 1st -2nd , Greater Atlanta Telugu Organization (GATA) held a cricket tournament to raise funds and promote awareness about Autism and how it affects families within our communities. One in every 110 children is diagnosed with autism, so the need to educate and understand this sensitive subject is imperative. 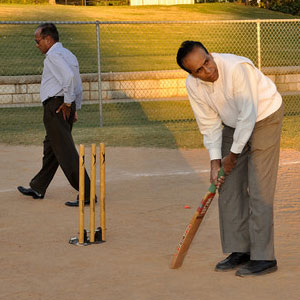 The initiative kicked off at the Sai Murali restaurant on September 22nd, with 27 teams registered and schedules finalized. On September 24th, a prayer to Lord Ganesh opened the day of the first round of matches, held at E.E. Robinson Park in Sugar Hill, Georgia. The grandeur of the park was reminiscent of Wankhede Stadium, which hosted the World Cup finals. If you closed your eyes and listened as Girish Meka provided commentary, you would not have been faulted for thinking you were at a professional cricket match. There was music, laughter, food and more than enough fun for everyone in attendance. With over 270 participants in the tournament and hundreds more enjoying the festivities, it is safe to say that the GATA event was an astonishing success.

The finals were held on October 2nd. Mr. G. Narender Reddy and Professor Ranga Rao garu were the special guests and played for the first six balls. The batting and bowling was a heartfelt moment for them as it sparked a memory of Gully Cricket which they both enjoyed in their younger days. Later, Mr. Reddy performed the coin toss for the final match between Corpteq Indians and Monsters, whose captains were Sujith Taneeru and Sanjay Narla respectively.

Since Corpteq won the toss, they were first to bat and made 53 in 10 overs with 4 wickets down. The Monsters started the match and were struggling with 7 runs in 2 overs and one wicket down. Initially, it seemed as though the outcome was pretty obvious, but the Monsters rallied and ignited what ultimately became a thrilling game down to the last moment. The turning point was when Mr. Yogi pulled the weary Monsters with three 6’s, to 27 at 5 overs! The Monsters managed to snatch the match with one over to spare. Participants and spectators alike praised the jubilance and camaraderie on display during the GATA 2011 Cricket Championship.

The prize distribution ceremony was conducted by Siva Mattipalli, GATA Chief Coordinator. He elaborated on GATA’s objective of conducting the day and night Cricket matches for a noble charity cause and thanked all the umpires and volunteers for their hard work and effort.

Mr. G. Narender Reddy presented a trophy and certificate to the first place team; and Professor Ranga Rao presented awards to the runner-up team. The Man of the Match award was presented to Mr. Yogi, of the Monsters team, by Mr. Srinivas Muniganti. The GATA team recognition awards were presented to Mr. Gireesh R. Meka and Prasheel Gukanti for planning and organizing the event by Mr. Goutham Goli, CEO of Rapid IT Incorporated, and Mr. Narender Reddy respectively. The Chief Guest Narender Reddy garu thanked everyone involved in this effort and recognized that this is first event of its kind addressing Autistic children by an Indian nonprofit organization. He congratulated all the teams for playing for such a noble cause.

In closing, Professor Ranga Rao garu noted that on Gandhi Jayanti, holding a charity event of this magnitude is a testament to the good nature of mankind. He continued by mentioning how valuable sports are to mind, body, and soul, and before adjourning, he left us with a quote by Swami Vivekananda: “As body, mind, or soul, you are a dream; you really are Being, Consciousness, Bliss (satchidananda). You are the God of this universe.”