Dance production depicts life of the female saint of Vaishnavism 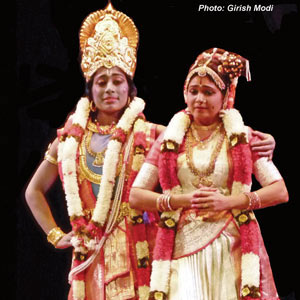 On Saturday December 11th, Smt. Sasikala Penumarthi, in collaboration with the Hindu Temple of Atlanta, brought the female saint of Vaishnavism to an audience of 700 at the Robert Ferst Center.

“Andal Kalyanam” depicted the life story of the 8th century Tamil saint-poetess Andal, affectionately known as Goda Devi. One of the twelve Alvars (saints) and the only woman Alvar of Vaishnavism, Andal is known for her devotion and marriage to Lord Vishnu. She is credited with great Tamil works still recited during the winter season.

While a similarly themed production was presented in Bharatanatyam style a few months ago by Smt. Chandrika Chandran of Natyanjali Academy of Dance, Sasikala’s dance drama was set in classical Kuchipudi dance form. Originally from a village in Andhra Pradesh, Kuchipudi dance is quicksilver and scintillating, rounded and fleet-footed.

A 10-piece Carnatic orchestra with mridangam, tabla, violin, flute and veena, and music by Subhashini Krishnamurthy, supported songs by Sri Indraganti Srikantha Sarma (lyrics). The ballet was divided into fourteen scenes and was acted by 40 students, the youngest being age 6. Sasikala, who also choreographed and directed, acted as adult Andal, Akhila as Sri Ranganatha (Vishnu), Sesha Lakkakula as Vishuchitta, and Hema Shilpa Uppala as Vishnuchitta’s wife.

Sasikala, who teaches Kuchipudi dance for Emory University, founded the non-profit Academy of Kuchipudi Dance in 1997. Rehearsals for this major program went on for months in the classrooms of the Hindu Temple, until every detail of each performance was satisfactory. Two professional seamstresses were utilized, and home-cooked meals were brought to every rehearsal. The production was a fundraiser for the Temple Yagsala Project for children in India.