COVID-19  In-depth info for Indians in Atlanta/Georgia. Click here
Home > Magazine > Around Town > Doing Business in Metro Atlanta: the Role of Immigrants Now and in the Future

Doing Business in Metro Atlanta: the Role of Immigrants Now and in the Future 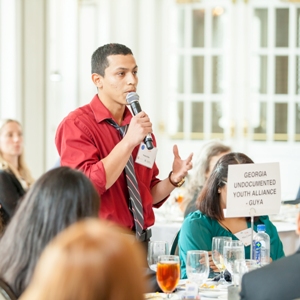 Business, local government, and immigrant advocates came together on October 22, 2013 at the Georgian Terrace Hotel in Atlanta to discuss immigrants: As Atlanta continues to prosper, harnessing and investing in its immigrant community will be critical to building a strong workforce to compete with other cities in the United States and attract foreign investment. What policies can city and county governments implement to further the economic and civic contributions of their immigrant populations? What is the role of the private sector in working toward Atlanta’s continued economic growth? The public meeting was part of the Americas Society/Council of the Americas (AS/COA)’s Immigration and Integration Initiative and was presented by the Office of Mayor Kasim Reed in partnership with the Georgia Chamber of Commerce, Welcoming America, and the One Region Initiative of the Community Foundation for Greater Atlanta.

One of the brochures available there from the organization Welcoming America (located in Decatur) summed up the underlying problem: "Over the last 15 years, large-scale immigration has impacted the United States in unprecedented ways. Immigrants have made their home in smaller cities and towns without a recent history of immigration—increasing the risk of fear and tensions in these communities. Change on this scale is never easy—not for the immigrants themselves, and nor for the communities asked to welcome newcomers whose language and culture they may not understand." 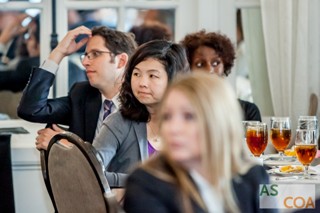 Courtesy of Americas Society/Council of the Americas. (Photo: Erik Voss)

Fear leading to stereotyping, bullying, and violence has been felt in many immigrant communities, including South Asian. Many may feel removed from the issues of immigration, other than issues dealing with visa regulations. Most are not illegals or Dreamers, for example, or Muslims or Sikhs worried about being mistaken for terrorists. However, America's feelings about immigrants in general and various groups in particular may directly affect children bullied in school, teens and young adults choosing career paths, and in fact, any adult of slightly darker hue walking the street who may fall victim to ignorance and prejudice. Many Indians also feel a calling to be aware of the plight of those who were close neighboring countrymen back in India and who are now refugees here. Beyond personal and social problems lie problems for the economy: if immigrants are seen as a problem, the economy can suffer. This forum therefore came together to promote understanding of immigrants and their role in the economy, to share ideas and find ways to improve locally.

Susan Segal, President and CEO of AS/COA, began by declaring, "We consider immigration one of the most important issues facing the United States and the hemisphere." It is very much a local issue, so her organization is bringing the discussion to several gateway cities: New Orleans; Charleston; Saint Paul; and Portland, Oregon, for example; and Atlanta. 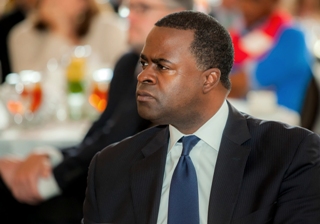 Mayor Kasim Reed delineated Atlanta's situation: it is #2 after Houston in job growth. After a morning roundtable sharing information between cities, he declared, "We can no longer live in a world where immigrants have such hurdles. They simply want to improve their life, be embraced, have a fair shot. If we don't embrace immigration, we put American ethics at risk." "The lack of progress in Washington," he exhorted, "should inspire us to do more about immigration. Stop using Washington to excuse our behavior locally."

Mayor Reed considered the people here: Half of Georgia Tech's engineers may leave, but an increasing number stay in Atlanta, and many are internationally diverse. Over 13% of Atlantans are immigrants. We have the second fastest growing foreign born population after Baltimore. We must take fullest advantage of our greatest resource, our people. Home Depot and UPS have 700,000 people and we must thank immigrants for that! It is only appropriate as we are the cradle of the Civil Rights movement and home of Dr. Martin Luther King. We have talented people of all backgrounds and all should feel welcome and included no matter where they were born. The same family could have US-born and immigrant children, so some might not have access to all benefits. We ask how the city can position itself as the most welcoming in the Southeast. Though Charleston and Nashville may have a start on us, we'll never get tired, he said. And he concluded with the Margaret Mead quote, "Never doubt that a small group of thoughtful, committed citizens can change the world; indeed, it's the only thing that ever has." Mayor Reed announced that Atlanta is joining Welcoming America’s Welcoming Cities and Counties Initiative, joining 21 other cities around the country that acknowledge the critical role immigrants play and that have committed to creating a welcoming environment. 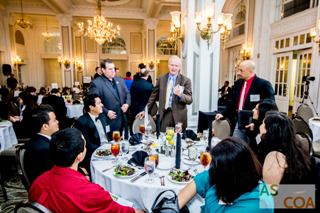 Philip Kent, chairman and CEO of Turner Broadcasting cited CNN as a brand that has employees from around the world and considers the cultural sensitivity and knowledge that they bring to be a distinct advantage. The younger generation, he has seen, has a world view that expects diversity. "I'm frankly amazed," he said, "at the reconstructed history": considering the immigrants who have come before, "who are we to now close the door on others?" A sensible, fair, humane immigration policy is good for all and good for the economy, he declared.

A moderated discussion called "Learning from Nashville's Success: Opportunities for Atlanta" provided practical tips stemming from the city's experience of fighting restrictive legislation. Thomas Negri, interim executive director of the Nashville Metro Human Relations Commission and former managing director of Loews Vanderbilt Hotel, spoke of the grassroots effort in Nashville that had helped with hundreds of housing loans that had a default rate equal to half the others. New arrivals are helped; the Mexican government is even in Nashville helping. "When I see mothers and fathers afraid to leave their homes!" he exclaimed. And so efforts have been made to help people meet and understand each other: Jews visiting a mosque for service, for example. Similarly, conservative politicians should be invited to participate in visits to other countries. Replying to a question from the audience on the ban in Georgia of undocumented child arrivals from attending state universities, he suggested that private universities offering tuition assistance could force the hand of state officials. 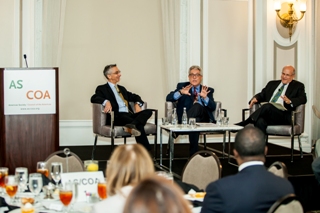 Courtesy of Americas Society/Council of the Americas. (Photo: Erik Voss)

Ronnie Steine of the Metropolitan City Council of Nashville serves on budget, education, and convention committees. He described the benefits of organizations being housed together—housing, health, jobs, etc.; of having immigration issues embedded in these general efforts; and of meeting those running for office to obtain pledges of inclusivity.

Several informative handouts were provided: "Immigrants and the Agricultural Sector" from the Council of the Americas (New York); "It's Essential—an economic valuation of the Essential Economy in the state of Georgia" from the Essential Economy Council (in Atlanta); and "Refugees in Georgia: FAQs" from the Coalition of Refugee Service Agencies – CRSA (in Atlanta). The "essential economy" is an occupational cluster that includes restaurant kitchen staff, janitors, landscape crews, farm workers, nursing aides, stock clerks, and other nonmanagerial positions—and that includes a large number of immigrant workers.

One of the benefits of immigration: rejuvenating the work force. A tidbit by Murali Kamma
While America’s India-born population increased by about 76,000 in 2011, it went up by over 111,000 in 2012, notes analyst William Frey of the Brookings Institution. Asian Americans, the Census Bureau estimates, experienced the biggest population gain last year, rising by 530,000 to reach 18.2 million. Over 60 percent of that 2.9 percent rise was due to immigration. “The good news is that the growth of today’s youthful minorities is occurring at just the right time to counter an extensive aging of the country,” says Frey. “Without this infusion, we could be staring at absolute declines in our labor force, and the extremely high age dependency rates faced by Japan and several European countries.”

Links:
Fact sheets on “Immigrants and…” the Economy, Entrepreneurship, the US Labor Force, the Housing Market, the Agricultural Sector, Health Care; also “Our Border and the Economy.&lrquo;
http://www.as-coa.org/articles/get-facts-ascoas-immigration-fact-sheets