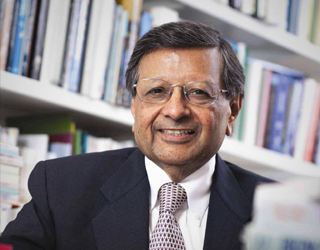 USA India Business Summit (UIBS) and Georgia Tech CIBER (GT CIBER) have been working together for over a decade to present remarkably interesting events and seminars in Georgia.

[Left] Dr. Jagdish Sheth presented the keynote at the UIBS webinar, “India at 73.”​

On August 12, 2020, these two organizers presented a webinar titled, “India at 73: Its role in the emerging new World Order.” This timely webinar was divided in two sessions. First was a keynote by Dr. Jagdish N. Sheth, Charles H. Kellstadt Professor of Business, Goizueta Business School, Emory University, and Padma Bhushan Recipient 2020. This was followed by fireside chat with two very experienced moderators: Dr. John R. McIntyre, Professor of Management and International Affairs, Scheller College of Business, Georgia Tech; and Ani Agnihotri, Managing Partner, USIBRC, and Co-Founder, UIBS. The webinar offered attendees a first-hand perspective about India, which was going to celebrate its 73rd Independence Day on August 15, 2020, and its role in the new emerging world order.

According to Dr. Sheth, during mid-eighties, 75% of GDP was generated by 15 nations comprising of US, Japan, and a few European countries. The same block also did 45% of world trade among themselves. This world order was later changed by forces like collapse of communism, technological advances such as smart phones and social media, rapid aging, new trade regime set in motion by World Trade Organization (WTO), global terrorism, and emergence of new leaders such as Modi, Trump, and Xi. The new world order is now governed by consumer markets, infrastructure, defense, and security driven relationships; and countries that are changing this order are US, China, India, Russia, and Brazil.

India, however, must increasingly embrace global standards and benchmarks for domestic products and services, and position itself to become a second global sourcing destination to de-risk world from China’s ever-growing capabilities. To be a leader in the world order, India will have to speed up its digital infrastructure, invite foreign investment for global markets, and provide huge economic incentives for innovation and entrepreneurship.

During fireside chat, Dr. Sheth and moderators discussed his remarks as well as some other pertinent issues. A few of these points were India’s possible bilateral agreements with US, Europe and UK; immediate need to build physical infrastructures in the country, particularly in rural India; and high importance on growth from the country’s agrarian economy which still supports 66% of India’s population.