Dr. Swamy speaks on the Hindu growth rate and the 2014 Indian election 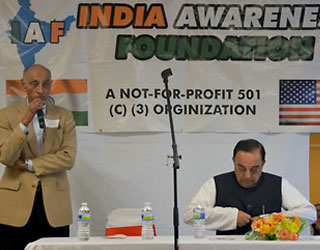 Atlanta once again witnessed the impressive oratory power of Dr. Subramanian Swamy, President of the Janata Party, at several events during his recent 42 hour visit. After a dinner for community leaders hosted by Mr. Ashwin Patel at his residence on Friday, June 14h. and a talk on ‘Hindu Identity’ the next morning at the Sai Temple, came the main event, a luncheon attended by nearly 200 members of the diaspora and hosted by India Awareness Foundation (IAF) at the Taste of India Restaurant, Alpharetta.

After lighting the lamp, Dr. Swamy was welcomed by Dhiru Shah, President of IAF. Mr. Shah told the audience that Dr. Swamy has been a dedicated, honest, and fearless leader who is fighting against some of the most powerful politicians involved in corruption and criminalization of politics.

Mr. Malla Reddy introduced Dr. Swamy as an Indian national leader with an impressive academic career at Harvard and IIT. He said that Dr. Swamy, a former Union Law minister, has written extensively on foreign affairs dealing with China, Pakistan, and Israel and has been working on transparency in government. 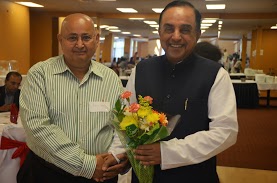 Dr. Swamy spent the next hour on a spellbinding analysis of black money, corruption, terrorism, and the forthcoming election in 2014 in India.

As in his September 2011 visit, Dr. Swamy defined corruption and described various scandals and his involvement in legal cases that have sent wrongdoers aligned with the Congress Party in the present UPA government to prison. He again explained how black money is siphoned to foreign countries by hawala transactions and estimated that nearly $1.3 trillion should be returned to India. He stated that black money in India is used for the rich at the expense of millions of poor people, and that its use in buying land has resulted in skyrocketing inflation in property.

Dr. Swamy lashed out at those who have been criticizing India for the so-called ‘Hindu’ growth rate of 2-3% P.A. during the first three decades after independence. He said that it should be called ‘Communist’ growth rate because of the Soviet style economic policies followed by the Congress party. Dr. Swamy stated that with elimination of corruption coupled with good governance, India could achieve a consistent GDP growth rate of 12% per year.

He explained that during the last two years, India’s economic growth rate has come down considerably because of corruption, terrorism, and wrong economic policies. The India rupee is depreciating at a rapid rate and it could touch the level of one US dollar to Rs. 75 soon if the government does not act to reduce its deficits, eliminate corruption, and follow infrastructure-based growth policies. Such a rapid rate of depreciation of the rupee could ruin India completely.

Dr. Swamy dwelt at length on the forthcoming parliamentary election in 2014 and felt that with Mr. Narendra Modi being appointed as the head of the BJP election committee, it is possible for BJP/NDA to win the next election with a clear majority. He was of the opinion that Mr. Modi is the most suitable leader to become the next prime minister of India because of honesty, charisma and proven track record of good governance in Gujarat. Most young people in India are fed up with the current UPA government and are backing Modi.

However, Dr. Swamy warned that politicians in Delhi are bent on destroying the image of Mr. Modi by fabricating false charges, using the state controlled CBI and other intelligence agencies. He warned there is a real threat to Modi’s life as the current power base in Delhi is afraid of Modi’s popularity with the masses.

Dr. Swamy felt that NRIs can play an important role in helping NDA win the election by using their resources, including social media. He asked young Indians to take entrepreneurial risk instead of secure jobs and to use their talents for building an economically powerful India. He concluded with his idea of starting a university to train future politicians.

During the Q & A session conducted by Dr. Basant Tariyal, Dr. Swamy answered many questions related to Indo-China relations, deteriorating Indian economy, Maoist and Islamic terrorism, and the prospect of Mr. Modi becoming the next prime minister of India. In his opinion, India is likely to overtake China economically in the near future, as the average age in India is less than in China. 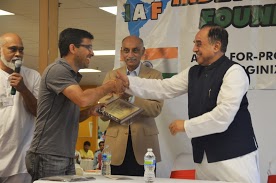 IAF recognized two of the many leaders of the Atlanta community with awards presented by Dr. Swamy: Mr. Swadesh Katoch, head of Seva International Atlanta for his young dedicated leadership in serving the community at large, and  Mr. Mahadev Desai for his fair and objective reporting on Indian-American issues and Indo-American affairs.

Video of the event has been posted on Youtube:
"Dr Subramanian Swamy's talk on 'India at Crossroads What can we do' on Jun 15, 2013 at Atlanta"