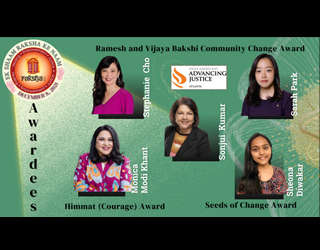 Ek Shaam 2021 was a pared down version of the traditional four-hour long music and dance-infused annual gala hosted by Raksha. The night focused on highlighting community leadership and partnership that best exemplified the response to the Atlanta Spa Shootings.

“In a year full of tragedies impacting our Asian communities throughout the United States, we wanted to highlight Asian women community leaders who worked in different ways to support the families and individuals impacted by the Atlanta Asian Spa Shootings. I was in awe of leadership, teamwork and trust among these leaders. Reflecting and honoring the work and leadership of these Asian women leaders was the only way that we felt like we could celebrate Ek Shaam Raksha Ke Naam this year,” said Aparna Bhattacharyya, Executive Director, Raksha Inc.

The event began with a musical performance by Purnima Mathur, vocalist, founder and director of Malhaar Music Academy. After some trivia questions and introductions by the Raksha board and leadership, the event moved to a panel discussion moderated by Monica Khant, Executive Director of Asian Pacific Institute on Gender-Based Violence (APIGBV). The panelists included Sonjui Kumar, Board Chair of Asian Americans Advancing Justice (AAAJ) - Atlanta; Stephanie Cho, former Executive Director of AAAJ - Atlanta; Sarah Park, Community Engagement Coordinator, Gwinnett County as well as a community volunteer who provided interpretation and support to many of the families impacted; and Aparna Bhattacharyya, Executive Director of Raksha, Inc.

In line with previous years, the 2021 event also included an awards ceremony to honor individuals representing the trifecta of board, nonprofit and community leadership. Raksha thanked them for their dedication to making lasting change for vocal, thriving and engaged Asian communities. There was a special recognition for civil and voting rights nonprofit organization AAAJ-Atlanta for being able to pivot and adapt to meet the needs of the crime victims and for being fully engaged in supporting the community. The Ramesh and Vijaya Bakshi Award for Community Change was presented to Sonjui Kumar, Stephani Cho and Sarah Park who worked with AAAJ-Atlanta Victim Fund Working Group and Steering Committee for the March 16 tragic shooting.

The Seeds of Change Award was presented to Sheona Diwakar, a high school student in East Cobb, GA. Sheona had organized a two-week drive in December of 2020 under the name “Soaring Doves’’ to collect menstrual products and donated over 10,000 sanitary pads worth around $2,500 to Raksha.

The Himmat (Courage) Award was presented to Monica Modi Khant. Prior to her role with APIGBV, she was the Executive Director for the Georgia Asylum and Immigration Network also known as GAIN. In this role, Khant had the vision to create the Victims of Violence program to help meet the immigration needs of many of the survivors with whom Raksha works.