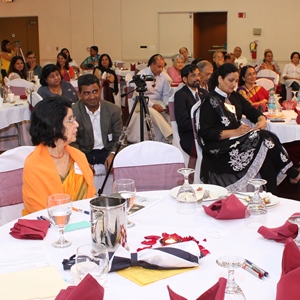 The first Ekal Power of Education Forum in Atlanta was held at Impact Center, Global Mall on Sunday, September 7, 2014 to explore new opportunities and campaign ideas for Ekal. Ekal Vidyalaya Foundation is a nonprofit working since 1986 in neglected rural and tribal areas to eradicate illiteracy. It operates innovative, One Teacher-One Room schools, providing free basic education, healthcare, vocational training, and empowerment. There are over 54,000 EKAL schools in India, with over 1.5 million children in this program.

TV Asia interviewed the panelists individually before the traditional lamp lighting ceremony and chanting of Ganesh Vandana. Next, emcee Ms. Rina Gupta introduced the SE region President of Ekal, Chander Aggarwal, who has been a pillar of strength for Ekal since its inception in Atlanta.

Executive director of Ekal, Ranjani Saigal, spoke of Ekal’s achievement in terms of being the only pan-India NGO and its long tradition of running on an extremely low overhead. She gave snippets from her conversations with acharyas (teachers) and the children themselves. Her recounting of a quote from an Ekal child, “Hum Bharat kaa nirmaan kar rahe hain”(We are building India), brought rousing applause. Bringing empowerment to over 54,000 Villages in rural India is just one of the many things that Ekal does every day.

The Keynote address was by a stalwart, Prof. Jagdish Seth, an internationally recognized business consultant. He emphasized that education is an equalizer that can offset the disadvantages of one’s circumstances. He engaged the audience in his characteristic witty style and endorsed Ekal’s mission.

Atlanta Chapter president Shiv Aggarwal delivered a speech on behalf of Mohan Kapur, a powerful leadership strategist and motivational speaker. He described the reasons why people give. It is important to note that Ekal is not a charity; it is a nation building effort. What touched a chord was the beautiful and powerful way that he wove in the poem “Do It Anyway.” 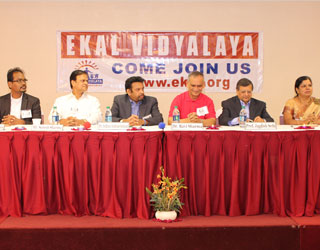 The first panelist was Dr. Ravi Sarma, a hematologist/oncologist and philanthropist. A long time Ekal supporter, he challenged Ekal to increase the fundraising by leaps. He advocated for a common “United Way” type of platform for like-minded movements such as Ekal, Aim for SEVA, SEWA International, and so on, since a large federation can make a more compelling representation to our elected Representatives.

Suresh Sharma, investor and business leader and an expert on how to drive sustainable business growth, recommended rethinking the way we define success today. He advocated that rural and remote India be strengthened so that India grows in all regions.

Dr. Indran Indrakrishnan is a gastroenterologist, a professor, and he is passionate about increasing awareness about colorectal cancer. Despite all this, he is never too busy to give a helping hand. He asked a loaded question: “How many in this room are born and educated here in the United States?” Not one person. His message was clear: Ekal’s support base must expand to include the next generation who will carry the torch forward. Dr. Indrakrishnan pointed out an opportunity to improve the website so that financial reports are easily accessible. Ranjani Saigal assured him that the new website is almost ready for launch and that this will be a lot easier to navigate.

A terrific presentation was made by Kiran Kodathila, President and CEO of @N2NServicesInc. A technology innovator with a focus in philanthropy, his vision is to leverage mobile education to enable acharyas to be tens of times more effective than they are today. Are Ekal schools ready for this technology? Listen to the Ted Talk by Sugata Mitra, titled “Hole in the Wall” for the word on this! Mr Kiran went on to present an app for commodity exchange. What better way to spur growth! He looks upon sustainability not as a far-range goal but as an immediate goal for survival. His commitment was to assist Ekal in implementing mobile technology in their schools.

Ranjani Saigal took a few questions from the audience and Shiv Aggarwal thanked all, including Ashiana Restaurant for refreshments and lunch and Rahul Chandra from World Hindu Network, Houston TX. This inspiring event brought together the brightest minds and the kindest hearts of Atlanta. The next step is for Ekal leaders to take a deep dive into each of these propositions to revolutionize the development of villages in India.