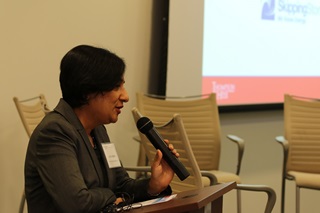 The Georgia Indo American Chamber of Commerce (GIACC) and Technology Association of Georgia (TAG) cosponsored the latest in the series of networking events on technical innovation, entrepreneurship, and international business, produced by Skipping Stone and the Atlanta law firm of Thompson Hine. On Thursday, May 24, 2018, the workshop and networking reception entitled “From India to Atlanta: Smart City Solutions” spotlit the explosive growth of Smart Cities and the business opportunities for technology and service companies. India, selected as the focus of the event, will be experiencing enormous market growth as planned by their government over the next several decades; it is also one of the best international trade partners of the USA.

Skipping Stone Partner Ross Malme and Thompson Hine Partner Greg Chafee, co-moderators, set the stage for the workshop, which was attended by over 100 business, government, and diplomatic representatives from Atlanta and across the Southeast.

The Keynote Address on India’s Smart Cities was given by CG Nagesh Singh, who noted that India is the world’s second most populous country with over 1.3 billion people and a $2.5 trillion-dollar economy growing at 7-8% per year, that is forecast to become the 3rd largest in the world by 2020. Bilateral trade between India and the U.S. is about $120 billion per year with about $28 billion directly invested by the U.S. in India and about $15 billion in the U.S. by India annually.

He pointed out that forecasts have 65% of the developing world and 86% of the developed world living in urban areas by 2050, with the top 750 smart cities generating two-thirds of the global GDP by 2030. The last Indian census (2011) placed India’s urban population at about 377 million people, which is predicted to grow to 600 million by 2020. Although 70% of India’s population lives in rural areas, 63% of GDP comes from the cities… underscoring that 30% of the population is producing 63% of GPD, as well as the importance of India’s cities to its economic health.

In 2014, the Indian government launched The Smart Cities Mission to develop 100 smart cities over a 5-year period to improve livability and promote economic development. The objective is to provide code infrastructure that gives a decent quality of life to its citizens, a clean and sustainable environment, and an application of smart solutions. The initiative is developing code infrastructure and elements of smart cities, such as adequate water supply, assured electricity supply, sanitation, waste management, etc.

In addition, the Housing for All initiative was undertaken as the rural poor in India are still challenged by lack of shelter. The government’s goal is to ensure adequate housing for the entire population by 2022.

India will spend an estimated $31 billion between 2016 and 2020 to implement Smart Cities, thus providing considerable opportunity to U.S. companies to get involved, invest, and do business in the Indian market, which is lacking in areas of technology, transportation, energy, water supply, etc. To implement the Smart Cities project, India is working to eliminate some of the government red tape, functioning more like a private sector company in terms of project formulation, management, and appraisals.

CG Singh ended by issuing an invitation for U.S. businesses to visit India and engage in this tremendous Smart City growth opportunity. 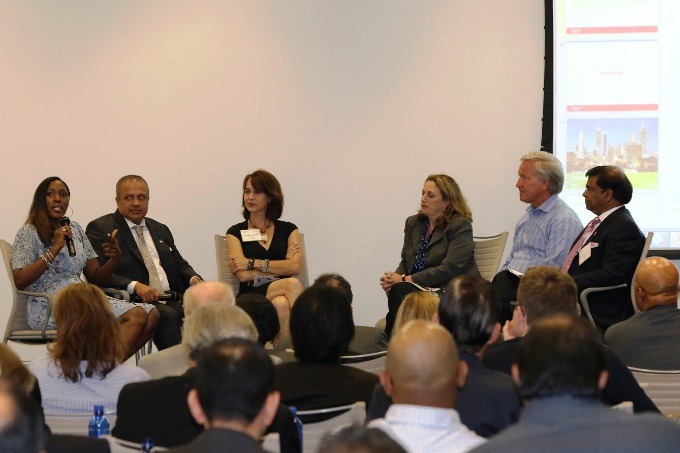 THE PANELISTS
In a panel session, each panelist gave a brief overview of their roles within their various organizations, as well as their vision of the future of Smart Cities.

Denise Quarles, Chief City Executive, SE Region, shared that Siemens is a 160-year-old company operating in India for 150 years. Siemens has deep involvement in Smart Cities on a global basis, with nearly 20,000 employees in India, and is heavily involved in India’s Smart City initiatives. In Atlanta, Siemens is part of the deployment infrastructure of Smart Transportation, including the Atlanta Street Car.

Prasanna Venkatesan, President & CEO of Landis+Gyr Americas, introduced L+G as the #1 provider of Smart Grid energy management solutions. L+G builds a communications network canopy over the city and enables all the devices (smart meters, smart streetlights, smart sensors) beneath it. L+G finds technology to scale and interoperate with other companies and products, recognizing that no one company can deliver all the Smart City solutions. “For L+G, one of biggest charters of the Smart City is around resilience, safety and security.” 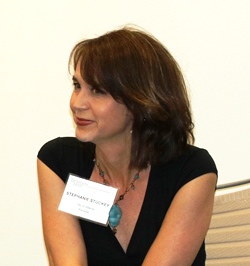 Stephanie Stuckey, Chief Resilience Officer (CRO) for the City of Atlanta, explained that the CRO’s role is often to resist traditional ways of thinking as smart technologies and innovation can be messy. She works with a diverse stakeholder group to facilitate creative thinking in an effort to unravel some of the complex problems cities face. Atlanta is working toward becoming a Resilient City with the Rockefeller Foundation Program, which spans 45 countries and six continents, including four cities in India.

Scott Jenkins, General Manager of Mercedes Benz Stadium, home of the Atlanta Falcons football team and Atlanta United professional soccer team, noted that the stadium also hosts such events as the Chick-fil-A Peach Bowl, the SEC Football Championship game, the 2018 National Championship football game, and the 2019 NFL Superbowl. He pointed out that the stadium, which opened in 2016 at a cost of $1.6 billion, is the first LEED Platinum stadium in the world.

Hari Eppanapally, VP, Global Info Tech Division, Bank of New York Mellon, is an expert both on Smart Cities and on their evolution in India. He underscored that India is becoming a global leader in all aspects of IT, especially in the development of Blockchain technology as it pertains to all industries and specifically as it pertains to Smart Energy and Smart Cities. India represents arguably the fastest growing Smart City market in the world and represents a huge opportunity for U.S. company participation.

To download a copy of the event’s compiled presentation, see https://cp359-5bbb18.pages.infusionsoft.net/