COVID-19  In-depth info for Indians in Atlanta/Georgia. Click here
Home > Magazine > Around Town > Ganesh Festival reaches out to all Indians in Metro Atlanta

Ganesh Festival reaches out to all Indians in Metro Atlanta 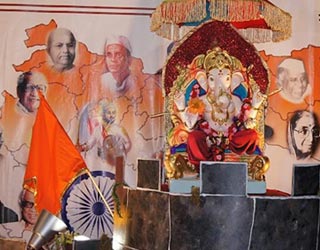 The first-ever ‘Sarvajanik’ Ganeshotsav (Ganesh Festival open to all) was organized by Maharashtra Mandal of Atlanta (MMA) on 10th September 2011. It was enjoyed by nearly 1,000 individuals, including leaders and representatives of several Indian organizations in Atlanta. This is the first time in MMA’s 25 years of existence that the scope of the auspicious event was expanded by opening it to the larger Indian community in Atlanta.

An all-day event was filled with several traditional and new activities, such as welcoming Lord Ganesha with chanting and lezim performance, pratishtapan, pooja, atharvashirsha sahastravartan, aarati, prasad, and a book drive. A cultural program by 22 artists was based on Shri Chatrapati Shivaji Maharaj. The maha aarati, Ganesh visarjan consisting of dindi, lezim and zende dance by nearly 100 individuals, chanting and dance by hundreds with live dhol and tasha music, and Lord Ganesh deity mirvanuk (procession) simulated the environment of the celebration in India, particularly in Maharashtra.

Several hundred devotees from parts of India beyond Maharashtra participated in the event with full verve.