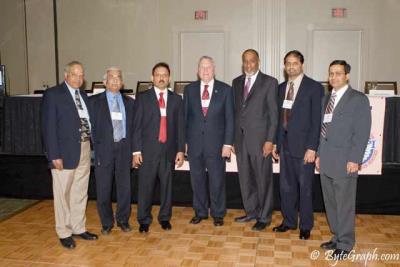 The Georgia Association of Physicians of Indian Heritage (GAPI) held its annual meeting with a day-long session that ended with a glitzy banquet at the Westin Atlanta Perimeter North on Saturday, April 17. The gala was attended by over 250 members from the medical field, Dr. Gary Richter, President, Medical Association of Georgia, and by Nathan Deal, candidate for Georgia Governor 2010 and former member, U.S. House of Representatives.

The morning’s activities included discussions on risk management, tax reduction strategies and asset management,and a continuing medical education program on diabetes in southeast Asians. The program also included a riveting talk on Ayurveda by Pallavi Sinha and a yoga demonstration.

During the social hour, attendees networked, and visited booths set up by pharmaceutical corporations, insurance providers, business related to health care, and Vibha, the nonprofit organization. For book lovers, there was noted author Robert Arnett selling his popular books India Unveiled and Finders Keepers: A True Story, while sari lovers flocked to a booth set up by apparel store Anokhi Ada.

Guest speaker Nathan Deal, who was introduced to the audience by GAPI Treasurer Dr. Abhishek Gaur, said, “You provide care for people that otherwise would be without care and you do that as a part of a great medical community in our great state and I want to thank you for all you do, for making healthcare affordable and available to the citizens of our state, and I am also impressed with what you do in terms of your scholarships because ensuring quality education for deserving students is enormously important.”

He said that some areas of health care needed reforms but it was probably more a social agenda rather than a health care agenda. “The Health Care Bill now is law. At state level, what concerns me is the mandated expansion of the Medicaid program to 133 percent of the federal poverty level. That will increase the number of Medicaid patients who will show up in your hospitals and medical practices. I believe many of these individuals are currently covered by private health insurance provided in most cases by their employer. But if all of a sudden taxpayers are providing a health care service package, private insurance policy will go by the wayside and taxpayers will assume that burden. And from the provider’s standpoint, it would mean a reduction in reimbursement for services that would have been paid for under a private health insurance plan. There are several concerns like this and that is why 16 or so states are challenging the constitutionality of the proposed measures.”

Deal said there was a great future in pharmaceuticals and biotechnology industries as well as in medical devices. He also sought the audience’s support in his run for Governor. “I like to encourage diversity and look forward to your support,” he added.

Dr. Sreeni Gangasani introduced the next guest speaker, Dr. Gary Richter, who informed the audience about the Medical Association of Georgia and its mission to enhance patient care and public health by advancing the art and science of medicine and by representing physicians and patients in the policy making process. He said that MAG members were generally disappointed with more government control in medical care with the passage of the Health Care Bill.

Dr. Richter said the tort reform law created a more attractive practice environment, which translated into a more stable physician population. He pointed out that there were some 1,000 more physicians in Georgia since the tort reform law passed in 2005.The bad news though was that the Supreme Court of Georgia recently struck down the state's caps on pain and suffering damages in medical malpractice cases. As a result the medical liability insurance premiums, which were down by about 18 percent since 2005, were likely to rise. He assured the audience that MAG was examining its legislative options in this and other contentious matters. “We value our relations with GAPI. I request you to join MAG and make your issues be heard, because w ith more than 6,000 members, MAG is the leading voice for physicians in Georgia,” he concluded.

Former president of GAPI and chairman of the trustees Dr. P.Natarajan recognized the members of the board of trustees and lauded outgoing president Dr. Santanu Das and his committee for an outstanding job during their term.

Dr. P.B.Rao, past president, announced that GAPI’s annual scholarship of $1,000 and citations of excellence had been awarded this year to Varun Katdare, Sagar Patel, Keyur Patel, Jill Mody, Shivani Mehta and Rabeea Khan.

Dr. Dilip Patel for President-Elect, Dr. Abhishek Gaur for Secretary, and Dr. Piyush Patel for Treasurer. With a show of hands, the attendees unanimously approved the new executive committee members.

GAPI’s incoming president is Dr. Sreeni Gangasani, a well-known cardiologist. Dr. Gangasani said he felt honored and humbled to accept the post of GAPI President, and promised to do his best in leading the organization. He lauded outgoing president Dr. Santanu Das for his hard work, determination, and drive. He thanked all the past and current members of the board of trustees and the board of directors and exhorted young physicians to join GAPI and play an active role in it. He welcomed the new members of his team, and added that he would strive to organize more health fairs in different parts of Georgia and strengthen the organization’s ties with bodies like the GIACC, Vibha and Sewa International.