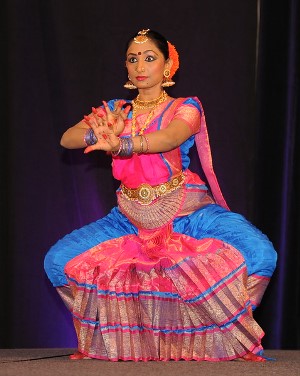 A board meeting and medical education seminar preceded the social hour, when attendees could also visit various informational booths. The program was emceed with composure and humor by Soumil Patel and began with a rousing rendering of the Indian national anthem, and the US national anthem by Anukrutha Venukadasula. Artistic director of Laasya School of Dance, Sridevi Ranjit, mesmerized attendees with her scintillating performance of a Bharatanatyam keerthanam titled “Jaya Jaya Durge.”

Dr. Indrakrishnan introduced his friend and chief guest, GA Representative Geoff Duncan. Dr. Indrakrishnan commended the exceptional work done by Mr. Duncan on the Georgia Rural Healthcare Reform Act which is now being recognized nationally as a model. Duncan’s keynote speech to GAPI was centered on Georgia being a national leader by creating more access to healthcare through creative ideas. He spoke about looking for better ways to involve the community to solve the issues that surround poverty instead of looking for another government program.

MAG president Dr. Steven Walsh spoke about the new GA House bills 165 and 249, which may change the way physicians practice. He appreciated the physicians who testified, called the legislature, and kept in contact with their local legislators. He stressed that all physicians should become MAG members.

Dr. Sreeni Gangasani (third from left in photo) is currently Regional Director of American Association of Physicians of Indian Origin (AAPI) South and a member of the AAPI Board. He is in charge of the GAPI free clinic at Global Mall, which opened in 2010 and is now open twice a month, on 1st and 3rd Saturdays, between 1-4 pm. Recognizing clinic volunteers, especially Dr. Sujatha Reddy, Dr. Jay Sampath, and Vidya Kanagaraj, the backbone of the clinic, for their dedicated and caring services, he appealed to the audience to volunteer at least once a year. GAPI also coordinated with the April 1 Sai Health Fair at Global Mall. Dr. Sreeni requested all to attend the AAPI convention in June.

Dr. Naresh Parikh, GAPI past President and AAPI President-Elect, spoke about the Global Healthcare summit in December 2018 in Pune, Goa, and Mumbai. Atlanta will again host an AAPI convention in 2019, after 13 years. 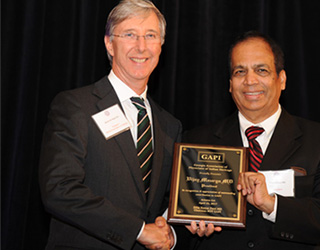 Rev. Nancy Yancey, founder of Rainbow Village of Lawrenceville, won GAPI's Humanitarian award. The Rainbow Village has an educational and holistic approach to break the cycles of homelessness, poverty, and domestic violence. Over the past 26 years it has transitioned more than 1,000 parents and children to the community as productive members.

Incoming President Dr. Lolabhattu said that his goal will be to expand the membership base. GAPI donates to several charitable organizations every year: last year $5,000 to Lydia House in Augusta, and this year $10,000 to Houston Healthcare System in Warner Robins for free mammograms for indigent patients.

The grand elegant décor, stunning lighting effects, music and sound system, photo and videography were provided by ByteGraph. And during and after a scrumptious dinner, Dr. Amit Chakrabarty, Sadhna Malkani, and Vignesh Balasubramaniam of Gitanjali Musical Group had the attendees on the dance-floor with Bollywood’s old and new high-octane chart-toppers.