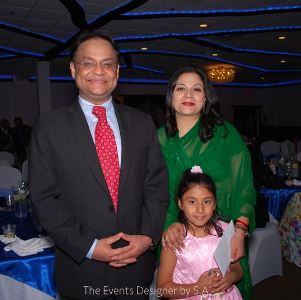 The Indo-American communities of Georgia put their most festive foot forward on July 11, 2015 at the Bombay Grill to welcome India’s next (second) Consul General to Atlanta.

The excitement was palpable! Spirits were high, decorations and lighting abundant, and the mood was energized as over 360 attendees representing 120 plus organizations across the state along with politicians, legislators, and others gathered for a rousing welcome to Honorable Nagesh Singh (left), who was accompanied by his wife Pragya, son Yashovarman, and daughter Yashasvini.

Mr. Singh, who demanded that he be referred to by his first name without the usual honorary titles, comes with 20 years of distinguished service to India. His appointments have included being Officer on Special Duty/Joint Secretary to the Vice President of India, Director (Pakistan, Afghanistan, Iran) in the Ministry of External Affairs (MEA), Counselor on Administrative and Budgetary Affairs in the Permanent Mission of India to the UN in New York, Private Secretary to the Minister of State for External Affairs, and Under Secretary (Pakistan) in the MEA. He served for a year in the Embassy of India to Senegal, Cape Verde, Gambia, Guinea Bissau, Mali, and Mauritania, and over 3 years in the Embassy of India to France.

Camaraderie and laughter permeated the banquet hall as guests enjoyed cocktails and hors d’oeuvres before getting down to the business of welcome and greetings. 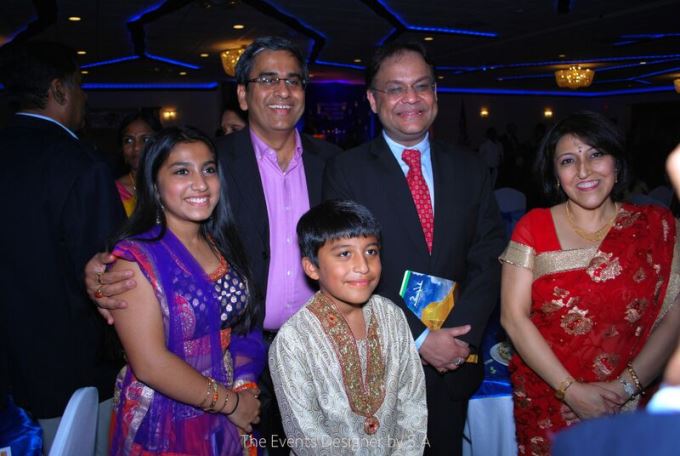 Subash Razdan, master of ceremonies, got the program started with the “Star-Spangled Banner” sung by talented teenager Shloka Danave and “Jana Gana Mana” sung by melodious Indrani Danave (above).

Teenagers from Geet-Rung School gave a dazzling folk dance of “Govinda Gopala” with a blend of dandia raas and garba.

Volunteer Dhiren Shah welcomed the gathering: "Today’s banquet in your honor reflects India’s traditional concept of unity amongst diversity in presence of the leaders/representatives of over 100 Indian-American organizations of GA, a microcosm of a mini India of various religious faiths, diverse socio/economic/political groups, and art/music/language entities.” 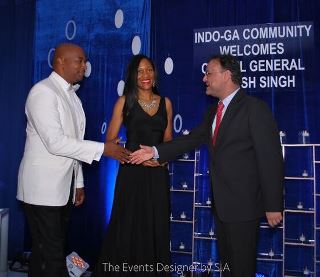 Atlanta City Councilman Kwanza Hall (left) declared that “Being here and feeling the enthusiasm here in this room is really special.” He acknowledged the Consulate General of India (CGI) for support in planning his last visit to India in January 2015. 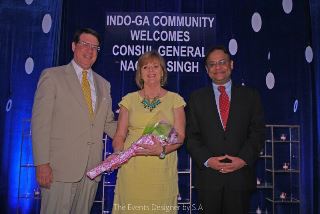 Consul General Nagesh Singh conveyed a message of friendship, dynamic service, and optimism. He noted the fellowship and collaboration between community organizations reflected in the event, adding, “My family and I are deeply touched and overwhelmed by support and friendship of the gathering here,” assuring that “We can do a lot of good work reinforcing Indo-US relations in the spirit of President Obama’s ‘defining partnership of the 21st Century’ along with our mainstream friends Mayor Rusty Paul and Councilman Kwanza Hall and so many others present here tonight.” He commended the community for caring as much about their land of origin as their land of adoption, assuring that the consulate will strive to serve the Indo-American community and accomplish the mandated goals of the Government of India with dedicated service for the Indian diaspora.

During the meet-and-greet and photo-op, the clamor for group/table photos with the obliging Consul General was cherished. No one spent a quiet evening, judging by the animated discussions of friends.