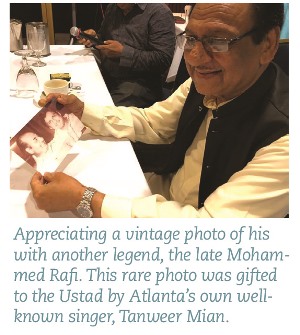 On very short notice, Aadhar Event’s promoter Sushil Agarwal was able to host a quick meet-and-greet with ghazal maestro Ustad Ghulam Ali saab on August 1, 2018. Having the benefit of being good friends, he convinced the maestro to visit Atlanta from New York. The maestro was kind enough to oblige, and thus a private get-together of zealous ghazal lovers was created by Sushil, inviting the small group to dine at the landmark Ashiana restaurant in Global Mall, to visit with the legend at length. Quite promptly, aluminum frames were set up with fabric draped on them as a backdrop. A banner welcoming his presence was hung from the top, and a table was set in front of the décor, with chairs for Ghulam Ali, Sushil, and emcee Aslam Pervez.

Atlanta poet Aslam Pervez made the introduction with his mellifluous voice and fluid words, praising the global maestro. He first thanked Sushil Agarwal for bringing him to Atlanta and give the ghazal aficionados an opportunity of being so close and personal. Sushil spoke of his friendship with Ghulam Ali and that he was humbled by his acceptance to show up on such a short notice. Ustad Ghulam Ali modestly spoke of the love of his fans that invigorates him and continues to propel him, despite age and distance catching up on him.

Ghulam Ali spoke of his youth and how he was entrusted by his father to Ustad Bade Ghulam Ali Khan saab (for whom he was named) and later at the time of leaving Pakistan, how he became a disciple (shagird) of Ustad Bade Ghulam Ali Khan’s brothers, Barkat Ali Khan and Mubarak Ali Khan, and of Amanat Ali Khan. With such names for gurus (barkat = progress, mubarak = blessed, and amanat = treasure to be guarded) it comes as no surprise that Ustad Ghulam Ali’s fame has reached every corner of the world. However, of all the three, he spent fourteen years with the excellent Ustad Barkat Ali Khan saab.

He spoke of the fourteen-hour-a-day training, which also included doing khidmat, serving the Gurus. He recalled when on one night, while he was pressing his guru Barkat Ali’s feet, the guru had fallen asleep for a long time. On waking up, he realized that it was too late in the night and yet Ghulam Ali was still there, pressing his feet. Moved by the devotion, his guru blessed him with the choicest blessing, that one day Ghulam Ali would be heard worldwide and become a celebrated singer.

Ustad Ghulam Ali also reminisced about his affection for and his visit with Mohammed Rafi, at the latter’s residence. Knowing that Ghulam Ali was in Bombay, Rafi called him and requested him to visit with him. Sending his brother-in-law with a car to fetch Ghulam Ali, he brought him home and offered him the finest hospitality, one that Ghulam Ali cherishes to this day. He also recounted his visits and performances with Jagjit Singh.

Giving a sample of his expertise, Ghulam Ali sang a phrase in multiple tones and emphasis, explaining how the meaning of the same phrase changed each time the punctuation and the tone of voice was changed. That is the beauty of ghazal, he said, and this comes only when you have completely understood the poet, his poetry, and what the poet intended to mean in the lyrics, and based on which, singers have to adopt the tone to convey the right mood of the intended words. In closing, he shared that he looks forward to a longer and more meaningful visit with Atlanta, God willing!

It was a momentous occasion for light classical music lovers, an impromptu gathering, which Sushil Agarwal superbly expedited.