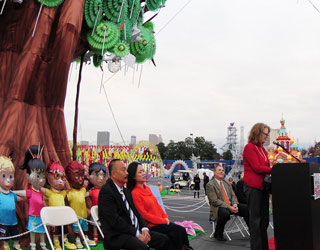 The Taj Mahal has come to Atlanta—as one of the huge lantern designs presented in Turner Field by a Chinese company. Global Winter Wonderland (GWW) threw open its gates to the public on November 21, 2013 and will remain open until January 5, 2014. Billed as the largest multicultural lantern festival outside China, it is not only entertaining but also educational and inspiring.

The ribbon-cutting ceremony was opened by John Lin, of IGO Group, Inc., the presenter of Global Winter Wonderland. He explained that GWW made its US debut in 2011 in Santa Clara, California and has now appropriately come to the home of the 1996 Summer Olympics. 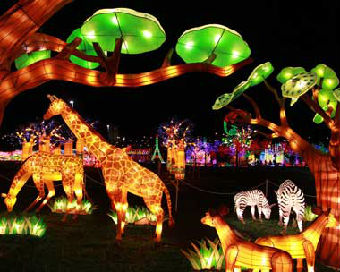 Lulu Huang, President of International Culture Exchange Group, the event's producer and creator, said that “Our endeavor is to celebrate diverse cultures and break down social barriers and misconceptions.” She pointed to the backdrop showing five children from five continents and said, “Whatever language we speak, whatever color of our skins, and no matter where we come from, we are all together. We are people of the earth. We have to live with each other, love each other, and learn from each other more. Enjoy your visit to this spectacular festival and travel the world in one day!”

The Atlanta Braves are also a partner in the venture, and Mike Plant, Braves EVP of Business Operations, welcomed all to Atlanta’s much loved Turner Field.

Zhang Chuanbing, Deputy Consul General at the Chinese Consulate in Houston, Texas, declared, “I am thankful to you for offering Chinese artists a stage for displaying their work in Atlanta, one of the most multicultural cities in the U.S. and one of the most well-known cities in China.” She described US-China exchanges and cooperation projects that are playing “an important role in increasing further and better understanding between our two people. … Let us join hands in driving China-U.S. relations forward.” Carla Smith, Atlanta City Council member, de¬clared, “we hope that this will be an ongoing every- year event. … it creates jobs, new revenue, and enter¬tainment for our great city.” 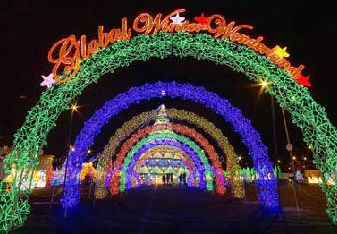 After the ribbon-cutting ceremony, visitors took a stroll in the theme park to admire the larger-than-life lantern designs of landmarks such as the iconic Statue of Liberty, imposing and majestic White House, Syd¬ney Opera House, Taj Mahal, Eiffel Tower, Chichen Itza, London’s Big Ben, the Golden Gate Bridge, Mount Rush¬more, M.L.K. Monument, Great Pyramid of Giza, the Great Sphinx, etc. The theme park has an international garden, dinosaurs, wild life, huge drag¬on lantern, and more, spread over 16 acres of land. There are rides, fun activ¬ities for children, international cuisine, and live entertainment from local, re¬gional, and international performers, including the UniverSoul Circus. Visit www.Globalwonderland.com for infor¬mation on visiting this unforgettable event in Atlanta.