GOPIO-Atlanta launched with pomp and pride 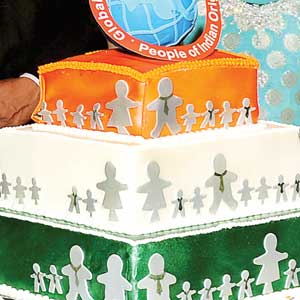 A diverse cross section of Atlanta’s Indian-American associations, including professionals, academics and community activists, attended the inauguration of GOPIO-Atlanta (Global Organization of People of Indian Origin) at its first awards gala & banquet on Saturday, April 23, 2011. Coincidentally it was also the inauguration of the beautiful Season’s Event Center in Patel Plaza, Decatur, GA.

President Bhairavi gave a PowerPoint presentation on GOPIO, a global organization dedicated to community service, with 25 chapters in 19 countries. She exhorted all PIOs and organizations to be members. Dr. Paddy Sharma noted the proposed opening of the Indian Consulate in Atlanta and recognized the many and varied contributions of the PIOs in Atlanta: Freedom Fighters, entrepreneurs, educationists, philanthropists, journalists and pioneers like the first person of Indian origin to become President of a University in America and the first female Olympian. “Just as we are proud of their achievements, we are also indebted to them for making the road ahead easier for us. So my big thanks to all the awardees tonight” said a beaming Dr. Sharma.

Dr. Agrawal, a UNESCO expert in education, administered the Oath of Office to the GOPIO -Atlanta Chapter’s new President, Bhairavi Nadgonde. Dr. Agrawal then lauded Mr. Arora for his hard work and commitment. In a brief but light-hearted speech, Mr. Arora welcomed the new chapter and touted about the increasing volume of work at his Consulate: 58,000 visas,15,000 passports, 7,006 PIO Cards, 10,000 OCI Cards, 30,000 Surrender Certificates, and 7,200 miscellaneous services were all provided in 2010 by a staff of only 9 individuals.

A cake-cutting ceremony featured a tricolor layer cake depicting people and topped with the Gopio logo, made by Julie Thomas of Artisan Cakes.

After dinner by Mirch Masala, Saaz Aur Aawaaz regaled the audience with singers Dattaprasad Ranade and Saavani Ravindra, and accompanists Kedar Gulvani on violin and Amod Kulkarni on tabla. Narration scripted by Salim Arif was given by Milind Oak. Commentary covered Ghazal’s history, language, poetry, glamorization, its foray into Indian cinema and its global popularity on music CD’s and live TV shows today. Albeit Marathi singers, Dattaprasad & Saavani delivered Urdu Ghazals by Farida Khanum, Mehdi Hasan, Ghulam Ali, Pankaj Udhas, Qateel Shifai, Faiz and many more, with ease; they have presented over 50 concerts in the U.S. this year alone. The sound system was managed by Shyam Brahmbhatt.

And the highlight of this part of the program was when Consul Aroraji was asked to present shayari, as he is known to indulge in this art form. Without hesitation he garnered the mic to state that it was his late father who had studied Urdu and and inspired young Arora. Modestly, Consul Aroraji recited a few couplets by famous poets with expert diction and a mellifluous voice.