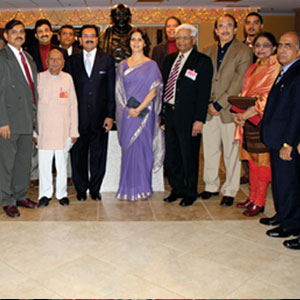 The joyous annual Diwali dinner hosted by the Gujarati Samaj of Atlanta attracted over a thousand members and guests to the ‘Sardar Patel Bhavan’ Hall on Saturday, November 5. Newly appointed Consul-General of India in Atlanta, Hon. Ajit Kumar, his wife Mrs. Margret Kumar; and Lilburn Mayor Mrs. Diana Preston and her husband were honored guests.

Celebrations continued inside the hall, with a dance to the song “Happy Diwali.” Emcee Paresh Patel welcomed all, and Hon. Ajit Kumar lit the ceremonial diya.

Gujarati Samaj activities were recapped: The OCI/VISA help camp was described, with 72 volunteers serving 150 applicants—even afterwards, the core team has been helping other applicants. Donors and volunteers were requested to enable more programs for senior citizens and youth and more activities in general. Efforts are being made to accommodate more applicants to the Summer Camp so that no one is left out. Sai Prasad Raval of Global Tutoring presented J.B. Shah and Mohanlal N. Shroff Scholarship Awards for 2011 to Neil Patel and Sona Sadsalia, respectively.

Amidst cheerful applause, President Chatur Chhabhaya presented a plaque to the Hon. Ajit Kumar, who then greeted the audience with a spirited “Sal Mubarak, Nootan Varshabhinandan, and kem chho?" (and instantly won their hearts). Subhash Razdan thanked Gujarati Samaj for being the first to make a pledge when GFUSA was working on installing the Gandhi Statue in Atlanta.

Ashwinbhai Shah had played a pivotal role in Gujarati Samaj Seniors programs; a posthumous award was presented to his wife Ashaben and daughter Parina. Awards were also presented to Gujarati Samaj Youth Association’s Bina Jasani, Ami Shah (most dedicated and committed volunteer), and other activity leaders and volunteers.

Thanks were proffered to Patel Grocers, sponsor Raj Shah, Sanjay Patel and his volunteers, donor K.B. Zaveree, and Kaushik Desai and Rupa Desai for their donation to renovate the JJ Hall and their commitment for the kid’s playground.

The audience was treated to vintage and also latest Bollywood numbers and light jokes by the Hungama 2011 Group.

Lilburn Mayor Diana Preston was appreciative: “My husband and I thoroughly enjoyed the Diwali Dinner. The food and entertainment were wonderful and we were honored to be seated with the new Atlanta Indian Consul General Kumar and his wife. Later we enjoyed watching the children shoot fireworks and it reminded me of the meaning of Diwali: of Light overcoming Darkness. The Indian culture has brought many wonderful customs and festivals to our community, and I enjoy learning their origins and meaning. I have been truly inspired by the Gujarati Indian community in our midst. Happy Diwali!”