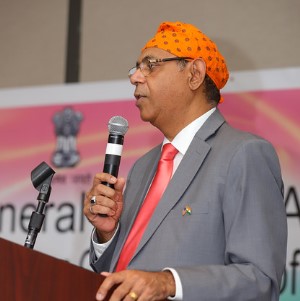 Guru Nanak’s 550th birth anniversary was celebrated at the Westin Atlanta Perimeter North on July 19, 2019. Organized by the Consulate General of India, Atlanta, along with Sikh community leaders from local gurdwaras (including C. K. Singh from Sikh Study Circle, Surinder Singh from Guru Nanak Mission Gurdwara, and Inderpreet Singh of ASEEN), the evening began with refreshments followed by a program of music (shabad kirtans) and remembrances of Guru Nanak Dev, the founding father of Sikhism who set a spiritual, social, and political manifesto based on equality and morality. 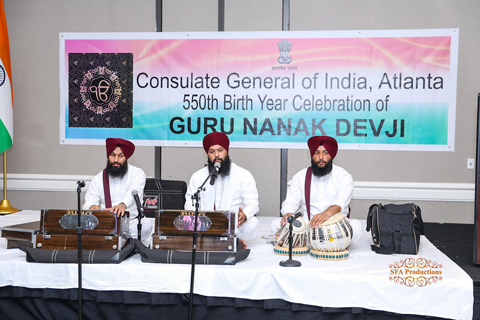 The variety of people honoring Guru Nanak was reflected in the audience. (Photo: SFA Productions)

India is a diverse country, she noted, with many cultures, languages, religions, and ethnicities. India, known as a spiritual land, has given birth to four religions: Hinduism, Buddhism, Jainism, and Sikhism. Sikhism is the youngest of these, and Sikhs make up only 2% of the Indian population, but the strong community has flourished worldwide. She described Sikhs as hard working, innovative, creative, and well respected in all spheres of life.

The message of Guru Nanak is universal, she said, as there is no monopoly over eternal truth. Sikhism rejects caste, superstition, and inequality, but holds to compassion, love, honesty, peace, and social harmony—tenets of all religions. We gather to reflect on such universal values.

The Consul General encouraged everyone to participate in events like International Day of Yoga (IDY) and the upcoming visit of PM Modi to Houston. She suggested inviting congressmen and legislators to that event to show our strength and our hard work and creative contributions to this country. 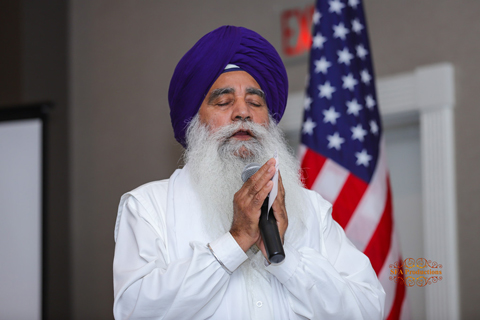 Various speakers talked about Guru Nanak. His teachings are part of the Guru Granth Sahib, the holy scripture of Sikhism in the form of 974 poetic hymns. Guru Nanak travelled far and wide teaching people the message that God is one who dwells in every one of His creations and constitutes the eternal Truth.

Guru Nanak’s teachings are practiced in three ways:
Kirat Karo: Earning/making a living honestly, without exploitation or fraud.
Vand Chakko: Sharing with others, helping those with less who are in need.
Naam Japna or Naam Simran: meditating on God’s name to control the five weaknesses of human personality. 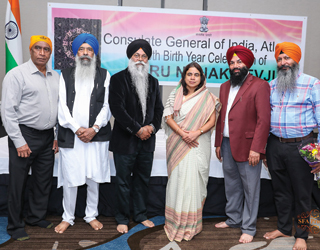 The evening was well attended by over 200 people, including members of various Sikh gurdwaras: Sikh Study Circle, the first gurdwara established in Atlanta; SEWA Gurudwara; Guru Nanak Mission Society of Atlanta; and Sadh Sangat of Georgia. Sindhi Sabha of Georgia and Sadhu Vaswani Center Atlanta were well represented. People from the Alabama, Florida, Mississippi, and South Carolina Sikh communities also participated. Sindhis and Ani Agnihotri from IACA were also acknowledged for their participation and support.

(Right) Inderpreet Singh addressed the audience; his speech is below in video and text. (Photo: SFA Productions)

Today we are all gathered here to celebrate a milestone – the 550th year anniversary of the Guru Nanak’s coming to this world.

As a Sikh, it gives me immense joy to see this being celebrated with such enthusiasm and fervor all over the world.

Recently, I was in Geneva where I participated in similar celebrations being hosted by World Council of Churches. And I know there are many more such celebrations, big-ger celebrations planned in the days and months to come.

But why is the world celebrating, the coming of the first Sikh Guru – for one because “Satgur Nanak pargateya meete dundh jag chanan hoeya!”, “With the coming of Guru Nanak, the veil of ignorance was removed and the entire world got illuminated.”

Recently under United Nations human rights watchdog, where India is also a member, a committee was made to form “faith for rights” declaration. When the final report came, the chairperson rejected it saying – How can I approve this declaration without any message of Guru Nanak in this, saying, “When we talk about faith and rights, I can’t find any better universal message than of Guru Nanak, which was for the entire universe.”

Now, while the whole world is exploring and celebrating Nanak, are the people from the land of Nanak listening to his teachings. I am afraid NOT. For if they did, they would have listened to his message of “Na ham hindu na muslam man” meaning “I am neither Hindu nor Muslim” and “Awal Aallah noor upaia kudrat ke sab bandee” meaning “We are all created by the same one creator”; we would not have witnessed the greatest dis-placement of humans on the planet earth called the 1947, Indian Independence when an estimated 2 million were killed and 14 million displaced. Think about it!

Bertrand Russell, who was awarded the Nobel Prize (for Literature) in 1950, once said that Nanak’s message can prevent WW​III from happening—but the Sikhs have not brought out this splendid message in the broad daylight, this is their greatest sin and the Sikhs cannot be freed of it.

And as a Sikh I will take that blame. We the Sikhs don’t believe in evangelism, and don’t try to convert anyone to Sikhism—we are, let us say, “a little shy” in talking about Nanak and his message. We keep it to ourselves … but today I would urge each and every Sikh to use this opportunity and be shy no more … open your arms and share Nanak with the rest of the world.

And to the rest of the world, I would say, we all share a common responsibility to have a peaceful, prosperous, and sustainable world. Please open your arms and embrace this wonderful message of unity and harmony and oneness with everyone. Only then can we make this earth a better place for everyone to live.

If we would have embraced Nanak’s message of “pawan guru pani pita mata dhart ma-hat,” meaning “consider air as your guru, water as your father, and land as your mother,” then 11 out of the 12 most polluted cities on a World Health Organization list would not have been our cities. Think about it!

If we would have embraced the message of Guru Nanak, “so kyo manda akhiya jit Jamey rajan,” meaning “why consider her low, when from her kings are born,” then, based on number of crimes committed against women, we would not have been ranked as the worst place on earth for women to live. Think about it!

The 9th Nanak, whom we lovingly also call, “Hind Di Chaddar” meaning “Protector of Hind,” sacrificed his life for the protection of the human rights of another faith—if we would not have erased those chapters of his sacrifice from our history books, then I can tell you, 1984 would not have happened when close to a million were impacted and tens of thousands were killed and targeted because of their faith. Think about it!! Rather, we could have shown the world how to live in harmony and perhaps prevented many other genocides from occurring. Think about it!

Can we celebrate Nelson Mandela by following the path of apartheid?

Can we celebrate Mohan Das Gandhi by following the path of violence?

Can we celebrate Jesus by following the path of non-compassion?

If the answer is no then we cannot celebrate Nanak unless we follow the Path of Truth, universal brotherhood, equality, and love for nature!

Thanks you so much for your time.