COVID-19  In-depth info for Indians in Atlanta/Georgia. Click here
Home > Magazine > Around Town > Hanukkah Celebrations at the Consulate General of India in Atlanta

Hanukkah Celebrations at the Consulate General of India in Atlanta 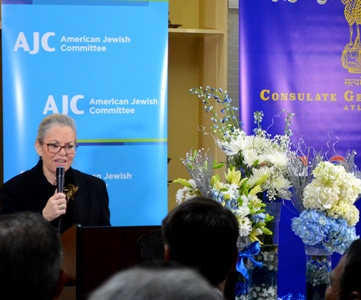 The Consulate General of India in Atlanta observed its third annual Hanukkah celebrations on December 16, 2017, in a lavishly planned event. It was the fifth night of Hanukkah.

The evening began with an hour of networking and socializing as the guests arrived. A local band played instrumental classical music to entertain guests. The event was in two parts, community addresses by illustrious dignitaries, followed by a sumptuous dinner.

Consul General Nagesh Singh hosted the Hanukkah gathering and kicked off the evening. He welcomed the presence of Sandy Springs Mayor Rusty Paul and Mrs. Paul, and thanked Ambassador Judith Varnai Shorer, the Counsel General of Israel in the Southeast, and her husband Oded, for their long-term support and friendship towards the Indian consulate and the Indian Jewish community. 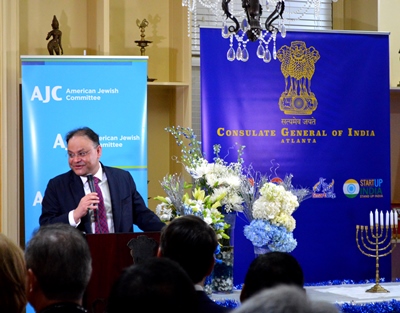 Consul General Nagesh Singh shared a brief but interesting speech on the long standing Jewish presence in India, over several hundred years, as India represented a haven for many communities. He noted that while some early Jewish scholars visited in search of exotic birds and animals, others came on account of religious persecution elsewhere. The Indian Jewish community embodied the doctrine of peaceful coexistence, and India has always reciprocated, setting an example for the rest of the world.

The Consul General mentioned that the first community they reached out to when the mission opened in Atlanta was the Jewish community. He noted how relationships between India and Israel have been at a historic high, when Indian PM Narendra Modi visited Israel, and partook in the hospitality of Israeli PM Benjamin Netanyahu and their entire cabinet for three days earlier this year. He remarked that India waited in great anticipation for an upcoming reciprocal visit from PM Netanyahu in 2018.

The Consul General shared his observation that nearly 80,000 Indian individuals of Israeli origin move between the two countries for study, research, business, and trade, highlighting the strong ties between the two countries. In his closing statements, he recognized that U.S. played an important role in fostering and promoting a healthy relationship between India and Israel, suggesting that their shared partnerships as well as human interests likely represents an ‘Axis of Stability’ between the three countries. 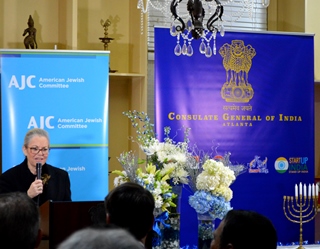 (Left) Ambassador Shorer's spoke, saying “Hanukkah is not Hanukkah if you don’t light a candle here at the Consulate.”

Ambassador Shorer followed Singh’s address, and fondly reminisced about PM Modi’s visit to Israel as well. She brought to the attendee’s attention the desalination unit on their dune buggy, one that represented a simple yet important technology that could have international application and benefit, especially in regions that suffer from natural disasters. She then talked about her relationship with the Indian Consulate and noted, “Hanukkah is not Hanukkah if you don’t light a candle here at the Consulate.” It was clear that she has a special relationship with the Consul General and his family, as well as the mission itself. 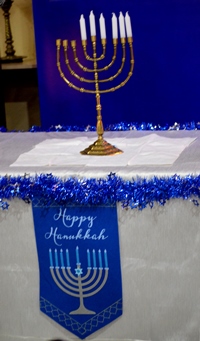 (Left) The Hanukkiah is a special menorah for Hanukkah, with nine branches (representing the miracle of the oil lasting 8 days) instead of the usual seven (for the days of the week).

Ambassador Shorer spoke about the deep symbolism of the lighting of the Hanukkah candles for the people of Jewish faith: the candles represented the heroism of a small determined people; it spread light and banished darkness, and was much like the story of the State of Israel itself. This year, she remarked, the Jewish community was lighting the Hanukkah candles with even greater pride and joy, because President Trump’s declaration about Jerusalem and Israel was at par with Israel’s declaration of Independence and President Truman’s support of it.

She also spoke about how the brightness of the candles illuminated a room with light and love. She closed her speech with this statement: “When Jews around the world light their Hanukkiah around the world, we can truly block the darkness out, and enjoy the love and light with our friends and family… May we have lots of light, all the time.” 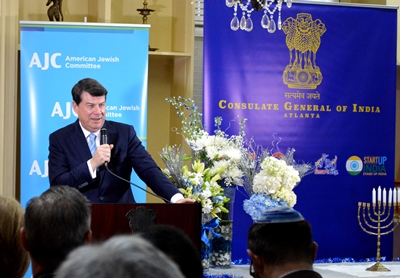 Mayor Rusty Paul of Sandy Springs spoke next, reminiscing about his seven-day trip, when his own delegation visited India (Mumbai, Bangalore, Hyderabad, and New Delhi). He shared his excitement about his upcoming trip to Israel. He stressed about the importance of finding common ground, and noted that the Hanukkah celebration represented such a “coming together, sharing common values.” 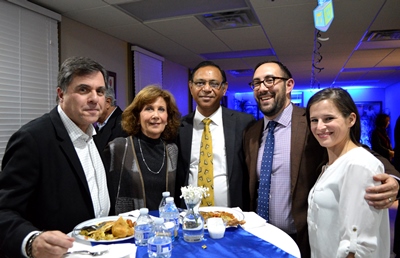 Many members of the Jewish community also attended the event, led by Mr. Dov Wilker, Regional Director of the American Jewish Committee (AJC), Atlanta. In his speech he recognized attending representatives from the Jewish National Fund, The Jewish Federation of Greater Atlanta, the Anti-Defamation League, APAC: American Public Affairs, Conexx: The American Israel Business Connector, Israel Bonds, and others.

He noted that the relationships of Jewish communities span across political and religious borders, and represent pluralism, idealism, and a shared regard for democracy. He explained the symbolism of lighting candles at this festival, and the difference between the Hanukkiah and a menorah, as well as the importance of only lighting as many candles as the day of Hanukkah.

Nissim Reuben, Assistant Director (Asia Pacific Institute), AJC spoke next. He shared his experiences as an Indian Jew in India and abroad. He spoke about the migration of nearly 80,000 Indian Jews to Israel, an act he referred as “Left home, to go home,” sharing their sentiments about the strong ties between India and Israel, stating, “Israel is our fatherland, India is our motherland; Israel is in our heart, India is in our blood.” He spoke fondly of Jewish schools, built more than 100 years ago in Muslim majority neighborhoods in Mumbai and Calcutta, where the students attended for good English education. He mentioned that people continue to live in religious harmony, and minorities coexist peacefully with local religious communities. He thanked the hosts and the attending dignitaries for their support and participation, and mentioned an initiative between Indiaspora and Global Indian Jewish Relations Institute (GIJRI), that promotes diaspora partnerships in the Indian communities in the fields of technology, encouraging attendees to become engaged in their efforts. 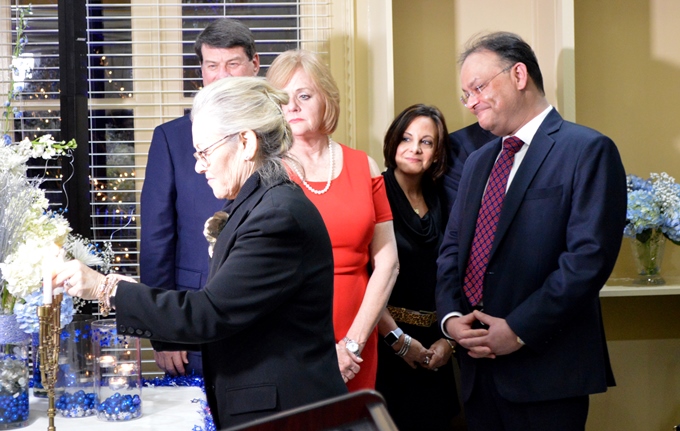 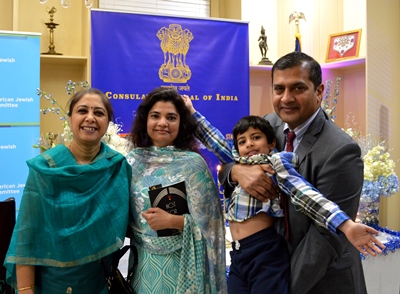 Reuben’s wife, Lavina, joined in to sing the Hanukkah song in Indian Jewish tunes, alongside Mr. Oded, as Ambassador Shorer lit five candles on the Hanukkiah. Attending community members joined in the singing. Smt. Lavina Reuben grew up in Mumbai and is a Bene Israel. Mr. and Mrs. Reuben finished the ceremonies by singing the English translation of the song. 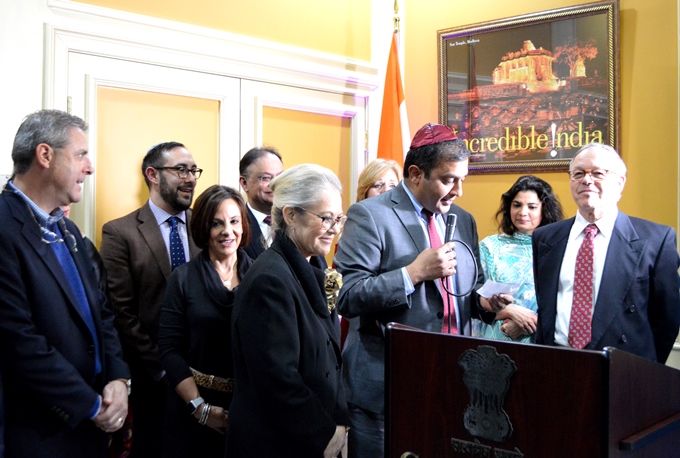 Dr. Jamin Brahmbhatt of Orlando emceed the event and this part of the gathering ended with a brief speech by Ritesh Desai, Vice-Chair of the Georgia Commission on Equal Opportunity. 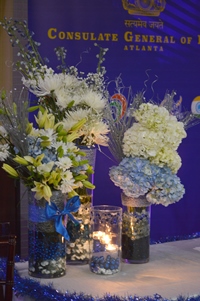 (Left) Flowers in the traditional Hanukkah colors of blue and white.

Pragya Singh, wife of the Consul General Nagesh Singh supervised the tasteful décor of the consulate and welcomed every guest with grace, regardless of rank, sharing the Consul General’s goal to establish a mission that was welcoming to all members of the community.

This event was attended by many important dignitaries including officials from the Embassy of India, Washington DC, and important members of the community: Indians, Indian Jews, as well as Atlanta- based Jewish residents.

Although the Indian Jewish community is 5000 strong in India, many visiting guests remarked how little they knew about them, perhaps because they blended so well with other communities around them, that made them indistinguishable from others. India’s Jewish population includes: Bene Israel (Mumbai and vicinity), Cochin Jews, Baghdadi Jews (Surat and Kolkata), Chennai Jews, Bnei Menashe (Mizoram and Manipur) and the Telegu speaking Bene Ephraim community.