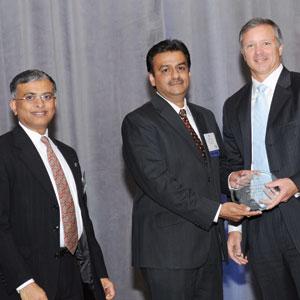 Registration for Venture and Innovation Summit – TiE Atlanta (VISTA) opened at Cobb Galleria on April 13 with breakfast for the attendees. Inspiring entrepreneur Pete Kight, Co-Chairman and Managing Partner of The Comvest Group, who was also the Founder, Chairman, and Chief Executive Officer of CheckFree until it was acquired by Fiserv for $4.4 Billion in cash in December 2007.

With Kight’s insights about future trends setting the stage, the summit launched into exciting panels arranged in cooperation with TiE Florida and Carolinas. Besides the 4 keynote addresses, more than 45 experts spoke in 10 panels on key aspects of entrepreneurship, such as mergers and acquisitions, IPOs, angel investors, protecting intellectual property, franchising and many more.

Tim Draper opened the second day of VISTA with an exciting keynote address. Tall and gregarious, Draper, with a string of degrees, companies, accomplishments, and accolades under his belt, demonstrated the power of viral marketing by having everyone standup and spread high 5’s to each other. The speed and power of viral marketing was evident when high 5’s spread from one end to another in no time. He showed a slide of himself riding an elephant to the office! His company’s website shows him on a rhinoceros statue in his office. With lyrics on a PowerPoint slide and guitar on an MP3 file, he had the audience sing his song on entrepreneurial investment. He even showed slides of his kids engaged in start-ups of their own. A phenomenal speaker, he rocked the opening of Day 2 of the summit.

Young Dharmesh Shah delivered an astonishing Keynote address. Dressed in blue jeans and rolled-up shirtsleeves, this Founder and CTO of HubSpot was just offered close to $ 35 million in a recent round of raising capital, which he denied as he deemed it unnecessary. At MIT he had presented a paper on startups, but the University did not accept it citing a lack of research for Shah’s failure to list references. This prompted him to start a blog, onStartups.com, which is now a leading online destination for entrepreneurs. Prior to HubSpot, Dharmesh was the founder & CEO of Pyramid Digital Solutions, an enterprise software company acquired by SunGard Business Systems in 2005. His nonchalant views on start-ups drew attendees and he was happy to spend one-on-one time with attendees.

America’s Got Talent semi-finalists, Atlanta’s Kruti Dance Academy, got feet tapping at the banquet. Then, emcee Arti Pandya announced two lifetime achievement awards: John Imlay, Jr., and Sig Mosley, respectively Chairman and President of Imlay Investments Inc. Sig Mosley was the partner chosen by John Imlay, a retired Chairman and CEO of Management Science America (MSA) Inc, one of the top ten software companies in the world. Imlay was inducted into the Technology Hall of Fame for Georgia in 1994. In his motivating Keynote address he described calling his employees tigers to catapult their performance. He sold MSA to Dun & Bradstreet Corp for $ 400 million. The godfather of Georgia’s technology community, he is credited with helping create two of Atlanta’s biggest tech industries: software and internet security. He has financially backed more than 120 technology companies since 1990 blockbusters Internet Security Systems (ISS) and Tradex Technologies. Imlay’s legacy lies in building MSA which birthed more than 300 CEOs and nearly 100 companies.