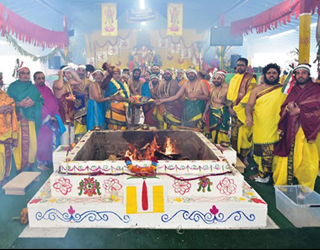 The Hindu Temple of Atlanta (HTA) performed Sri Lakshmi Narayana Yagam and Pavitrotsavam, from November 19 to 28, 2021 for Loka Kshema. Well-known as a center for spiritual and religious observances in Atlanta and the Southeastern United States for the past 31 years, HTA frequently conducts various yagams for world peace and individual well-being. In the past,yagams such as Laksha Lingarchana, Koti Kumkumarchana, Maha Rudram, Satha Chandi Sahitha Atirudram, Brahmotsavams, Rajathotsavam and Kumbhabhishekam have been conducted for the prosperity of the congregation.

The Sri Yagam started with Ankurarpanam, Punyahavachanam, Raksha Bandanam and other rituals on November 19. In addition to 11 HTA priests, there were 19 priests from other states. About 70 Rithviks participated in the Parayanam and the Yagam which had a total of 21 Homa Kundams (sacred fire pits).The participants followed the mask mandate diligently throughout the whole event. 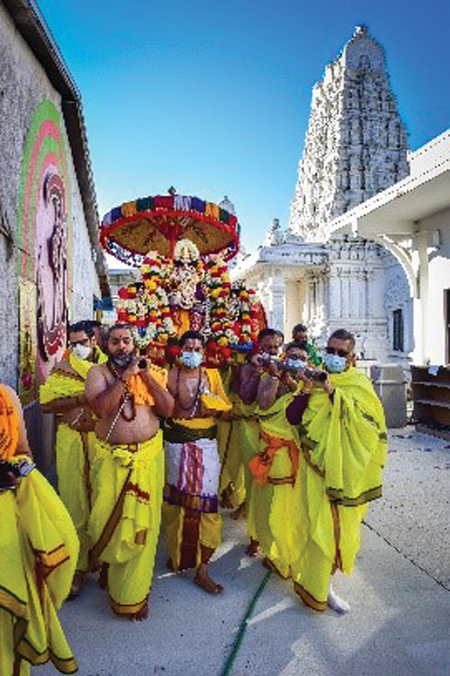 From November 20 through 27, the priests and Rithviks recited Sri Suktam 32,000 times and Purusha Suktam 16,000 times. In addition to the recitation of the suktams, various japams, homams and Ishti homams were also conducted in a unique manner every day. 21 havan kundams were constructed to depict the symbolic assertions for the Sri Yagam. The days started with the Thirumanjanam (Abhishekam) of the presiding deity Lord Venkateswara amid the rendition of suktams by the Rithviks and priests in unison. The recitation of the suktams continued in the Yagashala during the homams. Sri Vaibhava, Sri Santana Gopala, Sri Rama Taraka, Sri Hayagreeva, Sri Vainteya, Sri Sudarsana, Sri Narasimha and Sri Dhanvanthri ishti homams were performed in that order. The priests also conducted nithya homams in the evenings.

In the evenings,homams were performed by priests in the nine homa kundams followed by Nama Sankeerthana, Lakshmi Sahasranama Parayana with kumkumarchana, Unjal Seva was followed by Mangala Harathi and Theertha Prasada Viniyogam

The melodious bhajans provided soul-stirring moments to the devotees. At the end of the evening homam, the Utsava murthies were carried back into the temple in palanquins.

The final three days of the event also witnessed Pavithrotsavam being celebrated. This utsavam entails the ritual to ward off and mitigate any shortcomings in the daily poojas.

After completing more than 32000 times of Sri sukta parayana and more than 16000 times of purushsukta parayana, the finale on November 28 featured the final day's yagam and Maha Purnahuthi along with Ashtottara Satha Kalasa (108) Abhishekam and Santhi Kalyanam.

All devotees and rithviks were well taken care of with timely prasadams and refreshments. The event would not have been a grand success without the unfettered commitment from HTA Temple Management under the able leadership of President Smt. Prashanthi Reddy;religious committee chairman Narendar Reddy; and event coordinator Raj Rengarajan along with many volunteers.