COVID-19  In-depth info for Indians in Atlanta/Georgia. Click here
Home > Magazine > Around Town > Historic opening of the Consulate General of India in Atlanta

Historic opening of the Consulate General of India in Atlanta 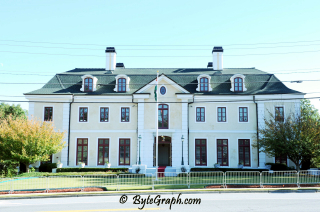 A diverse cross-section of the Indian-American community, representing over 80 ethnic, religious, and cultural associations of Georgia, attended the auspicious opening ceremony of the new Consulate General of India in Atlanta. India’s Ambassador H.E. Nirupama Rao inaugurated the beautiful Consulate building in the city of Sandy Springs on Monday October 22, 2012. 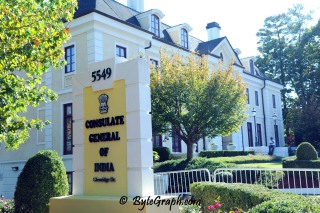 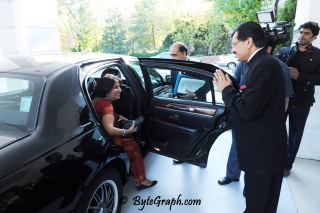 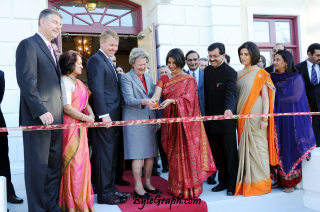 Nirupama Rao, Ambassador of India to the USA, inaugurating the new Consulate General of India, Atlanta on 22nd October, 2012 with (to our left) Eva Galambos, Mayor of Sandy Springs and Rob Woodall, Congressman from Georgia, and (to our right) Ajit Kumar, Consul General of India in Atlanta, and Mrs. Margret Kumar. (Photo: Bytegraph)

The Consul General of India in Atlanta, Hon. Ajit Kumar, gave the welcome and requested Ambassador Rao to perform the ceremonial ribbon-cutting ceremony. 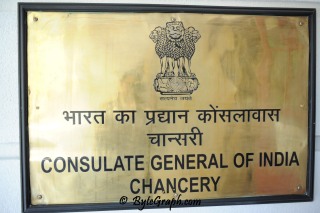 The office or building housing official records is known as a chancery. (Photo: Bytegraph)

The Consul General and Mrs. Kumar, with Mrs. Naik and the rest of the gathering, listen to Ambassador Rao in the new consulate. (Photo: Bytegraph)

“I am honored to be here,” said the Ambassador, “in the presence of this distinguished gathering for the formal inauguration of the new Consulate. The Consul General has been here for about a year, and he has done a yeoman service in putting together this institution. He had to locate this property, get the office to start functioning, get the staff from India, and also hire local staff for running the Consulate. More than that, he has established a network of friends, colleagues, and associates. The Consulate will help us provide good service and build and maintain strong and enduring relations between the U.S.and India. Georgia is the gateway to the Southeastern U.S., so it is befitting that we should have a consulate in the State of Georgia. I wish the Consulate, the Consul General, and all the staff ‘fair winds and following seas,’ as they say.”

Sandy Springs Mayor Eva Galambos commented, “We are certainly honored to have the Consulate of India within our community. The Indian-American community is very, very strong. India is the greatest democracy in the world, and it behooves us to improve our relations and trade. We will extend our full support to the Consul General and the Consulate.”

US Congressman Rob Woodall also lauded the role played by Ajit Kumar in setting up the new Consulate and in forging new friendships and relationships and assured Ajit Kumar of full support.

After refreshments and toast, all headed to the Heritage Hall of Sandy Springs for the reception. Mrs.Rao, Ajit Kumar, and Mrs. Margret Kumar were greeted with a rousing welcome as they entered the Hall. During social hour, they met the attendees.

Ajit Kumar introduced Ambassador Rao. “After earning her M.A.in English Literature, she joined the Indian Foreign Service in 1973. In a diplomatic career spanning over three decades, she has served in Washington, Beijing, Moscow, to name a few. She has served as India’s first woman ambassador to China from 2006 to 2009. She assumed her responsibilities as Ambassador of India to the United States in September 2011. Ambassador Rao is married to Sudhakar Rao, a distinguished civil servant. She is fond of art, literature, and music. She has also written a book of poems.” 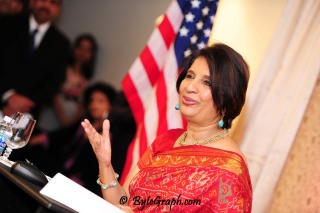 Ambassador Nirupama Rao said, “This is a very memorable and historic occasion. It is the first time that we are establishing a diplomatic consular presence here in the fair state of Georgia. We already have consulates in New York, San Francisco, Chicago, and Houston, so the consulate here will be fifth one. We could not have a better location for the new consulate than in the historic city of Atlanta. The partnership between India and the US is a vibrant partnership. It is a growing partnership, growing both in terms of strength and in terms of substance. It is natural that it should be so. Through this partnership between two democracies we are establishing a defining relationship for the 21st century, an indispensable relationship as President Obama termed it when he came to India two years ago. Our Prime Minister Dr. Manmohan Singh says that it is a relationship based on principles and pragmatism. In 2011 India’s trade with Georgia was $ 1.9 billion, and that is only a fraction of the total trade between India and the United States. And now that we have our consulate here, I am confident we shall see a quantum leap in trade and commercial relations between the two countries. More than 40 Georgia based companies have been operating in India, and India is looking for investments from Georgia in areas such as infrastructure, in logistics, etc., and this is where Georgia has proven its expertise and leadership. In the area of health, India is collaborating on several projects with the Centers for Disease Control and Prevention based here in Atlanta. The jurisdiction of the consulate will extend to Alabama, Florida, Georgia, Mississippi, Puerto Rico, South Carolina, Tennessee, and the Virgin Islands. The consulate will serve the 300,000-strong Indian American community which will contribute to enhancing people-to-people linkages. I have very fond memories of Atlanta. During 1990 I used to interact closely with the Martin Luther King Center, because I was part of [the Indian Department of] Press, Information, and Culture. We also watched with a lot of interest your celebration of Olympics in 1996. The consulate, in addition to its normal role, will try to promote tourism and also educational ties. We have 103,000 Indian students in the US. I am happy to say that 32% are girls (laughter and applause). Educational ties are part of the pillars of our strategic dialogue. 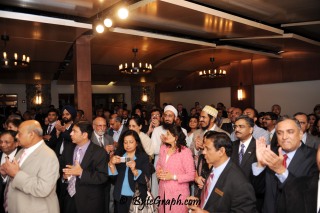 “Our Consul General,” the Ambassador continued, “is one of our most experienced diplomats as he has served all over the world. He brings enormous knowledge and experience to his duties here. He has performed a pioneering role in this city in one year that he has been here. He has made so many friends in the community. All of you present here is a testimony to his diplomatic skills. This consulate is your window, your door to India. We want to build bridges through this consulate and we will work with you. The Indian-American community has played a vital role. We know the role they played in ensuring the success of the Civil Nuclear Deal and there are many more instances. So as the saying goes, ‘You are the wind beneath our wings.’ There is so much respect expressed for the community—for their achievements, for their hard work, intelligence, expertise, family values. The young generation of Indian-Americans is American in every sense of the word, but they have a certain link or connection that ties them to India. That is very precious to us. India is well poised to become the third largest economy of the world in a few years and your knowledge and skills are very important for India’s growth story. So please give back to the country you are from. Finally I would like to thank Mayor Galambos and you all dignitaries for being here today. I look forward to coming back to this beautiful city and interacting with you on future occasions. I want to thank the Department of State, City of Atlanta, the City of Sandy Springs, and the City authorities here for all the help we have received in bringing this project to fruition. Thank you.” 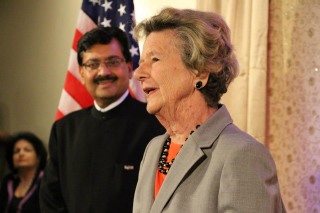 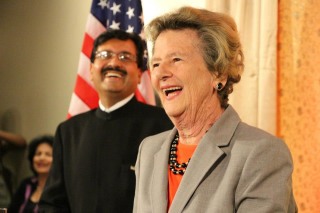 Mayor Eva Galambos of the city of Sandy Springs said, “This is the most illustrious gathering we have had since we became a City. I saw the charm and knowledge of Ambassador Rao in the words she said. She was gracious, she was compelling, she had the facts—she is an amazing woman. We are absolutely delighted that the Consulate General of India is located in the City of Sandy Springs, in a distinguished building which is like the Taj Mahal (laughter). We are proud of what you have done. We look forward to many, many years of wonderful friendship and assure you of our full support.” 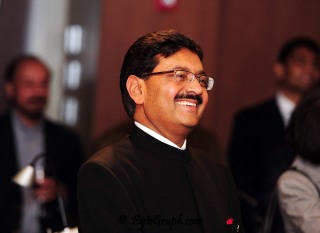 Ajit Kumar concluded by saying, “It is my pleasure once more to thank all the dignitaries and leaders of the Indian-American community who have made this historic day possible, and to make this dream a reality. I thank them from the bottom of my heart. As the Ambassador said, ‘We are here to serve the community. I wish Happy Dussehra and Eid; and also best wishes for the coming festive season.” 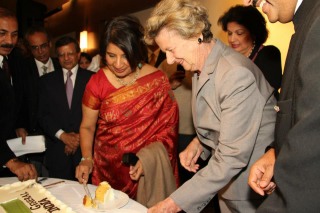 The cake-cutting ceremony was followed by an enjoyable evening with delicious Indian cuisine. (Photo: City of Sandy Springs) 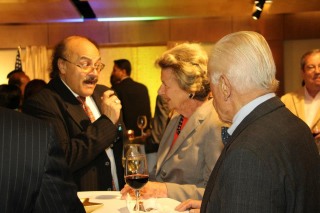 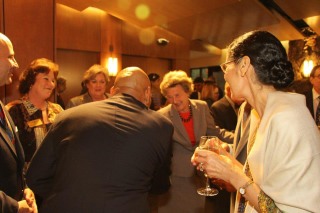 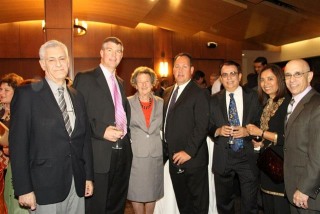