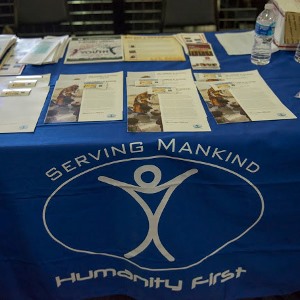 After having great success in Dallas for the last two years, Humanity First’s Meena Bazaar fundraiser was held at the Atlanta Events Hall in Duluth on September 6, 2014.

Humanity First is a nonprofit organization registered in about 41 countries across 6 continents with a focus on disaster relief and human development projects. Since 1994, Humanity First U.S.A. has set itself apart from other similar nonprofits by spending more than 90 percent of the money raised on programs to relieve suffering caused by natural disasters and human conflict and on programs related to education and health. “We are motivated by love and compassion of mankind,” stated Mahmooda Rehman who serves as the local Humanity First Ambassador.

The term “Meena Bazaar” has its roots in Southeast Asia where, in the era of Mughal emperors, Meena Bazaars, also known as Khush Ruz (Day of Joy), were held exclusively for women, while the emperor and a few princes were the only males present. This event was also for women only.

Booths at the bazaar were set up with Indian clothing, jewelry, makeovers, henna tattoos, and food. It was a great turnout and thousands of dollars were raised for two strategic initiatives in America: “Our Kids, Our Future” (OKOF) and “Feed the Hungry.”

OKOF recognizes that our nation’s public school systems have been historically underfunded and understaffed, especially schools in low-income communities. This program aims to help those underprivileged school districts by offering services including tutoring and mentoring programs for students, computers for classrooms, school supply kits, and more. So far this initiative has served schools in Chicago, Baltimore, Portland, and San Jose.

While statistics indicate that 48.8 million Americans, including 16.2 million children and 6 million seniors, struggle with hunger, what people might not recognize is that about 220 billion pounds of food is thrown away each year, an astounding number by any standard. Therefore, the mission of “Feed the Hungry” program is to reduce hunger in America by creating awareness about food and water wastage.

Humanity First Meena Bazaar will use the funds raised to highlight both of these important issues in addition to disaster relief across the globe. For further information please email at menabazaratlanta@gmail.com or call (404) 395-3213.

[The article above appears only on the website for November, not in the November print/digital issues.]