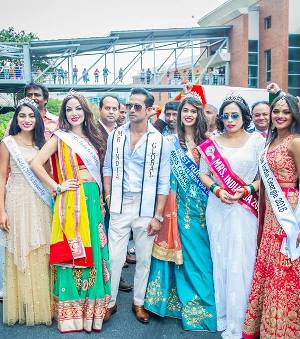 India American Cultural Association (IACA) is the oldest Indian-American nonprofit organization in Georgia. It promotes better Indo-US relations and showcases the rich socio-cultural-educational heritage of India to our host country. Celebration of 21st Festival of India (FOI) at sprawling Infinite Energy Center in Duluth on August 5, 2017 was done with élan and gaiety. About 4,000 spectators saw a whole day of jam-packed activities and 36 cultural performances. Festival of India (FOI) is done in collaboration with local Indian-American community organizations and participating sponsors.

The Official VIP segment was kicked off by FOI Program Director Vishwanth Ganti. VIP Program Coordinator Ani Agnihotri shared the history of FOI since 1997 as he has been an integral part of the original team that started FOI, which has now become a leading event of its type in the SE USA. An impressive roster of VIPs with help from volunteer Kartik Bhatt were present, including U.S. Congresswoman Hon. Karen Handel, Consul General of India Nagesh Singh, GA State Senator Josh McKoon, GA Rep. Geoff Duncan, GA Rep. Meagan Hanson, and Gwinnett County Board of Commissioners Chairman Charlotte J. Nash.

IACA Chairman Ravi Singh in his welcome remarks mentioned that the mission of IACA is to create bonding among the expatriate Indians, their kids, and the American public at large. This is achieved by preserving the best of Indian culture while creating mutual respect for both cultures based on American values of freedom, individual liberty, and pursuit of happiness. FOI is the embodiment of our mission and our goals to reach out. We celebrate this event from our land of birth, very proudly in this adopted land of ours. Mr. Singh also mentioned that the USA deserves part of the credit for Indian Independence. More than 100 years ago, immigrants from India on the West Coast saw the value of Liberty first hand in this land. They got motivated and decided to go back and fight for their right to be free, and that was foundation of the Ghadar Party in 1913. He also said that President Franklin D. Roosevelt pushed the British to ensure that they were going to leave India after World War II, so we should use this opportunity to say thanks to the USA.

The cultural program this year at FOI gave all a feel of majestic India and its ethnic diversity. Some of the most prestigious music and dance academies teaching classical Indian dances in Metro Atlanta worked tirelessly to showcase dances of India. Cultural Committee team Sanjay Prakash, Pushkar Despande, and Nivedita Garabadu stepped up the game by presenting 36 cultural performances without any interruptions or delays. Atlanta Nritya Academy performers got 1st prize in FOI dances (adjudged by a private donor). FOI 2017 had about eight hours of program and was emceed by Vikas Ratan Goel, Anu Ramesh, and Riya Pandit. Beauty Pageant winners of 2016 added glamour to the event, and IACA welcomed contestants for Beauty Pageant 2017.

According to the Atlanta Regional Commission (ARC), Asian-Indians are found throughout the 10-county ARC region, but they are heavily concentrated in four counties: Gwinnett, DeKalb, Fulton, and Cobb. Areas heavily populated by the community may also be indicated by the locations of retail and service establishments serving the community. Gwinnett is home to the largest Indian-born population, 39 percent larger than DeKalb, which ranks second in the region for persons born in India. Of the region’s Asian born population, 19 percent were born in India. This represents the largest population group from Asia in the region. Gwinnett County is home to 24 percent of all Asian-Indians in the 10-county ARC region and 31 percent of all Asian-Indians in the state.