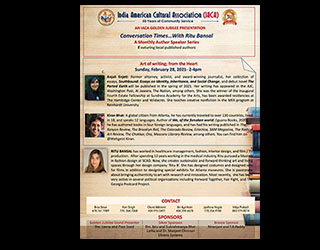 The India American Cultural Association (IACA) has been celebrating its Golden Jubilee and 50 years of community service through its ongoing monthly author speaker series “Conversation with Ritu Bansal.”
The webcast series has been bringing together a set of local Indian-American authors each month to showcase the talent of South Asian creatives and discuss authentic South Asian stories and struggles.

The IACA series began in February when Ritu Bansal sat down with Kiran Bhat, author of We of the Forsaken World and Anjali Enjeti, author of The Parted Earth to discuss the art of writing and the experience of growing up South Asian in American society. The conversation addressed how the quintessential South Asian childhood experience has changed since the 70’s as well as the contradictory lack of support for creatives along with an eagerness to celebrate creatives’ successes in the South Asian community.

In March, the series featured Dr. Uma Majmudar, author of Gandhi and Raj Chandra and Dr. Khyati Joshi, author of White Christian Privilege: The Illusion of Religious Equality in America. Bansal and the authors discussed social justice and Gandhi’s philosophy. The discussion highlighted the importance of diversity in a space where white culture is considered the default. 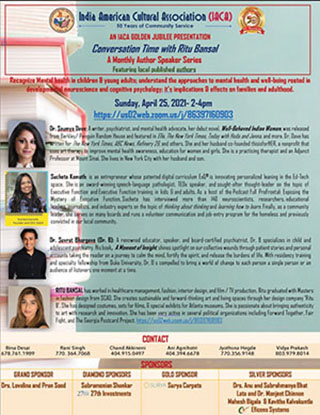 In April, Bansal joined Dr. Suvrat Bhargave, author of Moment of Insight; Dr. Saumya Dave, author of Well Behaved Indian Women; and Sucheta Kamath, host of the podcast Prefrontal to tackle a topic that is typically taboo in immigrant communities: mental health. Their conversation delved into the role childhood trauma plays in creating behavioral issues in adults and emphasized the fact that mental and behavioral health is not an individual issue but a family issue that needs to be tackled for the health of the community. The team urged listeners to seek support now and expressed concern for the rise in mental health issues among children.

[Right] The Author Series has been bringing authors together to discuss important issues such as mental health.

Bansal spoke with Khabar’s own managing editor Murali Kamma, author of Not Native and Khabar contributor Reetika Khanna, author of Kismetwali & Other Stories in May. With both books being collections of short stories, the authors talked about the power of short stories, the in-between nature of immigrant life, and their individual writing journeys. The conversation also touched on India’s Covid crisis, and the authors discussed the theme of last rites in their stories.

In June’s webcast, Bansal connected with young adult and children’s writer Roshani Chokshi, author of The Star-Touched Queen and the Aru Shah series, to dive into the topic of bringing South Asian Young Adult stories to life. Chokshi discussed her path to being published, her writing process, and how traditional South Asian storytelling and her childhood in Georgia influenced her characters. Chokshi also revealed that Disney is looking into turning her Aru Shah series into a TV show, and Paramount Pictures has already bought film rights to The Star-Touched Queen.

While the in-person panel planned for the August installment of the series was canceled by mutual agreement due to concerns about the Delta variant of Covid-19, the series is planned to continue with more authors in upcoming webcasts.